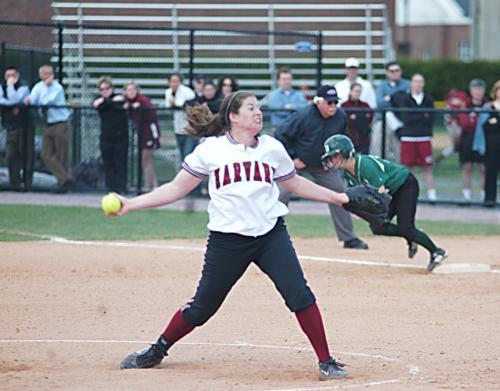 Captain Shelly Madick, shown here in earlier action, has pitched 25.2 consecutive innings of shutout ball. The last run she surrendered was on March 30 against Princeton. Madick is 6-9 with a 3.29 ERA and 67 strikeouts on the season, and has picked up fou
By Kara T. Kelley, Crimson Staff Writer

Now in first place in the Ivy League North Division, Harvard softball (18-15, 9-3 Ivy) extended its winning streak to 11 games and earned a winning overall record for the first time this season after sweeping Yale (13-21, 2-10 Ivy) in a four-game series this weekend.

“We’re starting to really continue to play well,” Harvard coach Jenny Allard said. “Our momentum is picking up...We want to win every single game and we knew Yale would be a battle and the games would be tough”.

“We go in to every series expecting to win, but it’s easy to lose one game out of four,” captain Shelly Madick said. “Even if you think you’re the better team, even if you’re playing better ball than them, a lot of things happen in games that it’s easy to drop one. We were really focused going into the last game. We were on a mission.”

In the fourth and final game of the weekend series, Harvard claimed victory, sweeping Yale on its own turf.

Sophomore slugger Lauren Murphy knocked in four runs, going 2-for-2 with two walks. After back-to-back singles by freshman Ellen Macadam and junior Hayley Bock, Murphy drove them in on a single to center in the opening inning. In the third, Murphy launched one down the left field line, clearing the fence and scoring two.

All three Bulldog runs came in the first frame after a few Crimson walks and errors, followed by a double to center. The runs were charged to senior starter Amanda Watkins, who faced the first six batters and did not give up any hits. Watkins was relieved in the first by sophomore Dana Roberts., who earned the win, throwing 4.1 scoreless innings and allowing only two hits.

Madick closed the game, pitching the final two innings and striking out two to extend her streak to 25.2 scoreless innings.

After the Crimson’s three-run rally in the top of the fourth, the tally remained set at 7-3, as neither squad scored again.

Each squad tallied eight hits and three errors, and Harvard left more runners on base but still managed to pull out the win. Yale pitching helped the cause, walking a total of eight Crimson batters.

Junior Bailey Vertovez took the mound for the opening 4.1 innings, striking out three and allowing three runs off four hits, only one of which was earned. Sophomore Margaux Black appeared for two outs in the fifth and turned it over to Madick, who earned her fourth save of the year, holding the Bulldogs to three hits and no runs.

Harvard scored in three of the first four frames to jump out to a 4-0 lead. Macadam contributed with an RBI single in the second and a lead-off solo home run in the fourth. Fellow rookie Caitlin Bowers drove in two with her third-inning single to center.

In the fifth, Yale brought in all three of its runs on only two hits, capitalizing on Crimson mistakes to narrow the margin to one run. The first run scored on two consecutive Harvard errors. After a defensive switch, a single to right drove in two unearned runs.

The Crimson also took advantage of mistakes when a walk came around to score on a throwing error for the final run of the game. Earlier in the inning, the fifth tally crossed the plate after a single to center from Vertovez.

The class of 2010 stepped up in the second game, anchoring the Crimson’s offensive and defensive performances. Knocking in all four runs and allowing a single run over seven innings, four sophomores combined to drive Harvard to its ninth straight victory.

Sluggers Jennifer Francis and Melissa Schellberg split the effort at the plate, each driving in two.

Schellberg put Harvard on the board in the fourth, roping one to center to convert a scoreless tie to a 2-0 lead.

Yale plated its only run the next innings on a triple down the right field line.

Francis tacked on some insurance runs in the final frame, unloading for a two-run home run over the left field fence. The longball was the fifth of the season for Francis.

From the mound, Roberts started and threw for five innings, allowing only one run on four scattered hits. Black closed it down to earn her first save of the season, allowing two hits and leaving the bases loaded to end the game.

In two innings of scoreless relief, Black gave up two hits, but Harvard’s defense kept them stranded to secure the win.

In the first of the four game series, the Crimson dominated in a seven-inning shutout, bringing around seven base runners while stranding eight Bulldogs.

Madick pitched the first five innings, surrendering five hits while striking out five and keeping Yale from crossing the plate. Black continued to deny Yale for the final two innings, not allowing a single hit while sitting down two.

Scoreless into the fourth frame, the Harvard offense came alive when Francis blasted a longball to right, scoring two.

A three-run sixth started with a single to center by Murphy, scoring Bock. Vertovez launched a two-run double after a bases-loaded Bulldog pitching change to increase the lead to 5-0.

The Crimson’s final pair of runs came on a Yale throwing error that scored one and allowed Francis to reach base. Francis came around to score on a Murphy double to right for the seventh and final Harvard tally.

The closest the Bulldogs came to crossing the plate was in the fourth, when a pair of singles and a walk loaded the bases. After a ground out, Madick cut the effort short by striking out two and stranding three.

“As far as our momentum goes and having confidence in our team, it’s huge for us,” Madick said.

The Crimson will try to continue its winning streak against Boston College on Thursday at Soldiers Field.