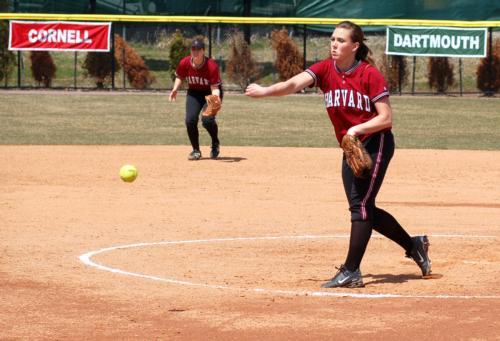 After a week full of postponed play, Harvard softball (10-15, 3-3 Ivy) competed in its first Ivy League home game against Columbia (12-18, 3-3 Ivy) yesterday at Soldiers Field. Originally scheduled for Saturday, the doubleheader continued through conditions that felt more like February than April. 40 degree temperature, wind, and rain made for messier-than-average defense, as the Crimson and the Lions combined for 10 errors on the day.

“It’s muddy out there, it’s hard to get your footing, it’s gross outside, and it’s easy to makes errors,” captain Shelly Madick said. “We were capitalizing when they were behind in the count on us and we were hitting the ball pretty hard.”

Despite the miserable weather, Harvard walked away with a pair of 10-3 wins.

The worsening conditions did not faze sophomore Jennifer Francis, who contributed two key hits, knocking in half of the Crimson’s runs with five RBI. Three of those runs were scored in the second inning, when Francis tripled down the right field line. Entering the contest as the team leader for batting average and RBI, Francis turned the two-run second inning into a five-run rally.

Struggling with a slippery ball and cold hands, multiple Lions walks and errors added to the Crimson’s offense, all of which came in the second and sixth innings. Harvard’s final offensive shot produced another five-run rally, this time led off by sophomore Stephanie Krysiak. Krysiak reached third after two Columbia errors on what would have been a single.

With two five-run rallies, all of Harvard’s offense came in the second and sixth innings.

“Once we started to get a big hit, we started to relax and get more hits,” Harvard coach Jenny Allard said. “Once we got on a roll, we stayed on a roll for a while.”

Harvard’s pitching faced some difficulty handling the conditions, walking a total of seven batters but dug in to strike out seven. Entering in the fifth inning in relief of senior Amanda Watkins with two on and no out, Madick struck out the side, leaving the bases loaded.

The Crimson defense backed up the effort on the mound, making only one error to Columbia’s five.

A recent shift from starter to closer allowed Madick to throw for a combined six innings between the two games. Not allowing the Lions a single hit, Madick picked up her second and third saves of the season.

Madick earned the save with flawless relief while the Crimson spread out its offense, producing 16 hits between nine batters.

“I think the key is that we’re a true team,” Allard said. “We’re not relying on one or two players all the time. Everybody’s stepping up at different spots.”

While Harvard maintained the lead for a full seven innings, the Lions scored three and came within one run after the top of the fourth, narrowing down a four-run margin to 4-3.

The Crimson answered in the bottom half of the inning with another run knocked in by freshman Ellen Macadam on a triple down the right field line. Columbia did not score after the fourth.

The Crimson continued to pull further ahead with a team effort that included Macadam contributing another three RBI.

In the fifth, pinch hitters gave Harvard a 5-3 lead. Sophomore Jessica Pledger added an RBI single to right center and senior Danielle Kerper had a two-RBI double to center.

“We’re on an upward slope now,” Madick said. “I think it’s just going to go up from here. Everyone’s settling in and it was nice to see the fruits of our labor here today.”