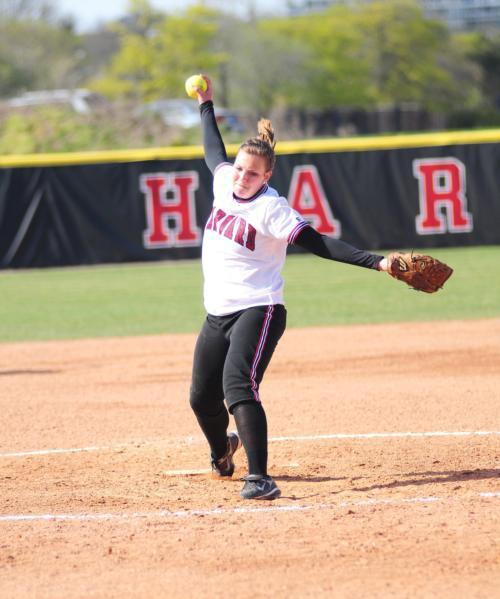 The defending Ivy League Champion Harvard softball team fell short of repeating last year’s success. Going for its second straight and fifth overall league title, the Crimson (25-22, 14-6 Ivy) finished its season Saturday afternoon against Princeton at Class of 1895 Field, falling 4-2 and 5-1. The Tigers (25-22, 18-2 Ivy) entered the series as South Division Champions and held the best record in the Ivy League. Princeton will continue on at the NCAA tournament.

For three members of the Harvard softball team, Saturday’s games were their last. Although ending with a loss is never ideal, seniors Amanda Watkins, Danielle Kerper, and captain Shelly Madick finished their careers in a league championship series.

“It’s not the way I wanted to finish my career, but it’s not all about that,” Madick said. “I’ve had a great season overall with the girls themselves. It’s a fantastic group of girls to know and to play with, and I’m going to miss it.”

In the second game, the Crimson could not come back after the Tigers rallied for four runs in the first inning. With two outs, a string of hits and walks—including a three-run longball to left—gave Princeton the lead from the get-go.

Harvard settled down after the first, and the Tigers managed to put just four baserunners on over the following five frames. A leadoff hit in the seventh came around to score off a double down the left field line and an RBI single.

Harvard finally crossed the plate in the bottom of the seventh when sophomore Melissa Schellberg started off the inning with a double to center. Kerper knocked her in with a sacrifice fly to right.

Unable to recover from a four-run deficit in the opening inning, the Crimson’s offense was quieted by Tiger pitcher Kristen Schaus, who struck out eight Harvard batters while walking none. Both teams’ pitchers threw a complete game. In her final appearance in a Crimson uniform, Madick sat down six and gave up eight hits, four of which came in the first inning.

Madick ended her fourth and final season for Harvard with eight wins, five saves, and 109 strikeouts, passing the century mark for the second straight year.

In the opening game of the championship series, a short string of Tigers hits broke a tie in their favor. With the score at 2-2 in the bottom of the sixth, a single to left followed by back-to-back doubles drove in the two deciding runs.

On the board early, the Crimson’s first two runs came from solo home runs by freshman Ellen Macadam and junior Hayley Bock. The second batter of the game, Macadam launched one to left-center, the third homer of her rookie season. Bock led off the following inning with a blast to center field, her sixth round-tripper this year.

Harvard led 2-0 into the bottom of the third, when Princeton caught up with a two-out, two-run homer.

Sophomore Dana Roberts took the mound for the first five innings. Facing 20 batters, she struck out three and allowed three runs off five hits. Sophomore reliever Margaux Black gave up two hits against the two batters she faced in the sixth. Madick came in for the final three outs, striking out two.

Starting off the season 1-9, the Crimson battled injuries to come back from the deficit and claim the North Division title. Although unable to claim victory in the championship for a second consecutive year, Allard was pleased with the season’s progress and optimistic about the future.

“We’re looking forward to the future and we have a young team,” Allard said. “All in all, I think it was a solid year. It took everything out of us to get to the championship game this year. It took a ton of effort, a ton of hard work because we just had to battle extra things this year...It’s a tribute to their work all year to end their season with the Ivy Championships. That’s a successful year in my book.”