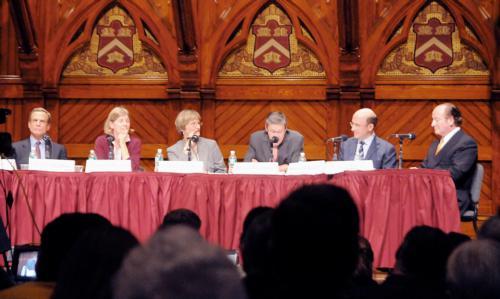 In light of a financial crisis that University President Drew G. Faust called “without precedent,” Harvard responded in typical fashion—with a panel of professors to discuss the problem.

While academic forums are common at Harvard, the pressing nature of this one’s subject matter and the fact that Faust promoted it drew a crowd which filled Sanders Theatre well before the presentation started. Others watched on a live Webcast.

The panel, entitled “Understanding the Crisis in the Markets: A Panel of Harvard Experts,” featured an all-star cast, including Dean of Harvard Business School Jay O. Light, Business School professor and Nobel laureate Robert C. Merton, and Ec 10 professor and textbook author N. Gregory Mankiw. The participants discussed their views on the events that led to the current crisis, the bailout plan making its way through the halls of Congress, and more extensive, permanent resolutions.

Light started off the discussion by likening his view of a solution to the actions of an emergency-room doctor trying to treat an automobile accident victim, accentuating the need for short-term stability (stopping the “bleeding”), an intermediate fix (doing something “surgical”), and longer-term “rehab and recovery.”

Robert S. Kaplan, a Business School professor and former executive at Goldman Sachs, focused on the stagnation of the American middle class, which has seen no real wage growth in recent years.

Kaplan, who led Harvard Management Company on an interim basis this year, argued that a “cleaning” of Wall Street balance sheets was necessary, but that rebuilding the middle class “engine of our economy” should also be a priority.

Elizabeth Warren, a law school professor and expert on bankruptcy and commercial law, was an audience favorite with her colloquialized version of the crisis. In her comments, Warren labeled subprime mortgages “35 cent bananas” that should have been priced at 15 cents, said homeowners had tapped the equity value of their homes with a “sledgehammer,” and described the housing bubble as being rife with “crazy money, free money, we’ll-pay-you-to-take-our-money money.”

She emphasized the need for increased regulation and a “financial product safety commission” to protect American families, much as government agencies exist to protect consumers from toasters bursting into flames and lead paint in toys.

Mankiw kept the audience chuckling with cracks about his safe job as a tenured professor, references to Chapter 26 of his “favorite textbook,” and “the mafia approach” of forcing banks to increase their capital stock, in which he supposed that the Treasury Department might say to an ailing bank, “You have a really nice bank here—I wouldn’t want anything bad to happen to it.”

He discussed academic critiques of the Treasury’s bailout proposal and alternatives through which the government might help banks recapitalize, but did not indicate which approach he favored.

Kenneth S. Rogoff, an economics professor and former chief researcher at the International Monetary Fund, said that the “bloated” financial sector needed shrinking for some time.

He garnered spontaneous applause for his jabs at recent Harvard graduates who had gone into investment banking by saying that many of them would now be free to “go into other activities.”

“I got a call from a former student today,” Rogoff said. “He asked, ‘What am I supposed to do now? Do I have to get a real job?’”

—Staff writer Maxwell L. Child can be reached at mchild@fas.harvard.edu.