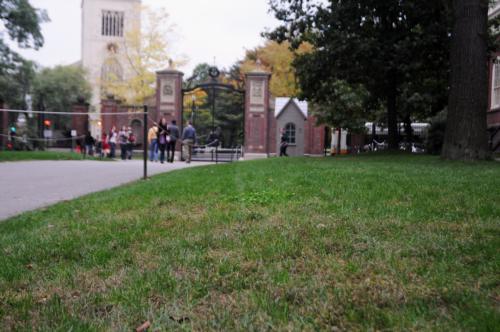 Harvard Yard is set to undergo restoration that will feature healthier compost plots that will need less watering and will not need herbicides, pesticides and synthetic fertilizers. By Peter R. Raymond
By Natasha S. Whitney, Crimson Staff Writer

Harvard Yard is in the midst of a massive makeover—but most of the effects will be invisible.

The Yard is undergoing a comprehensive soil restoration project that will revitalize its heavily-trodden grass and, within the next year, eliminate the use of herbicides, pesticides, and synthetic fertilizers.

Three organic test plots were implemented in Harvard Yard in March 2008. The plots were fed compost in lieu of conventional chemicals, and have been monitored biweekly for soil health and texture for the past six months.

The ongoing results of the plots “exceeded expectations” according to Eric T. Fleisher, who was a fellow last year at the Graduate School of Design. The plots were modeled after work that Fleisher directed at the Battery Park City Parks Conservancy in New York.

The plots fed with compost are healthier, more visually appealing, and, in an unexpected bonus, require less watering than a set of controls that was fed with the standard mixture of chemicals. The two approaches are also comparably priced.

The goal is to make all of Harvard fully organic within three years and expand the organic landscape management into other parts of Cambridge.

The project was conceived by GSD professor Michael Van Valkenburgh, who came up with the idea as he strolled through the Yard last spring with University President Drew G. Faust.

“She asked me what the one thing I would change about the Yard is,” he said. “I said that it would be great if we could take a more sustainable approach to the Yard particularly with respect to the challenging circumstance that the soils of the Yard has had hundreds of years people walking on it.”

The administration adopted Valkenburg’s proposal, creating the Harvard Yard Soils Restoration project that is based on the “natural, healthy nutrient cycling system.”

This project represents a major shift from general landscape management, in which there is a heavy dependence on chemicals and artificial nitrogen sources.

“We’ve been trained over the last 40 years that when there is a fungus infestation treat with fungicide, and when there is an insect infestation you use pesticide,” said Carbone, who tends to the plots with his crew. “This is a different approach where you let natural systems improve the health of landscapes and basically take care of themselves.”

In addition to improving soil and tree health, the sustainable organic method is also more environmentally-sound as the organic plots are less dependent on nitrogen from fertilizers.

“The amount of nitrogen being pumped into the ecosystem from fertilizers is having a very serious environmental impact,” said Peter J. del Tredici, a lecturer in landscape architecture and a senior research scientist at Harvard’s Arnold Arboretum. “A lot agricultural nitrogen has run off into aquatic ecosystems and has destroyed the native ecology.”

Valkenburg touts the success of this project as yet another example of Harvard’s increasing commitment to being environmentally-sensitive.

“The nation and the world look to places like Harvard to set standards for how major environmental shifts like this happen,” Valkenburg said. “The Yard is Harvard’s most emblematic icon and it’s important that the way that it is cared for represent Harvard’s commitment.”