David Halberstam will be memorialized with namesake Mt. Auburn square 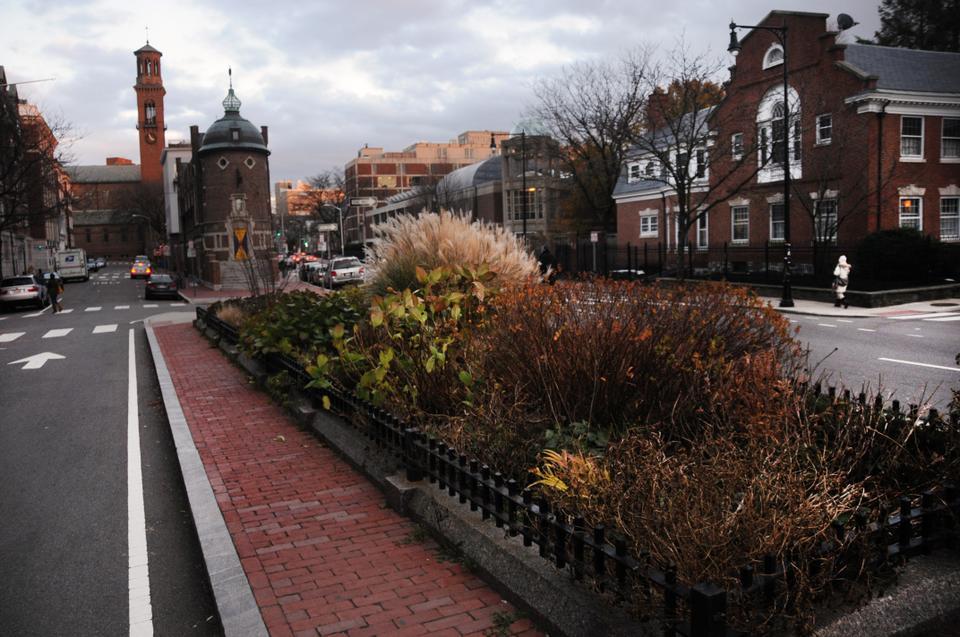 If the Cambridge City Council approves the proposal of former Mayor Francis H. Duehay ’55, the currently unnamed, triangular enclosed area located on the median at the intersection of Linden and Mount Auburn Streets will be named to commemorate journalist David L. Halberstam ’55.
By Xi Yu, Crimson Staff Writer

A Cambridge City Council meeting determined on Wednesday that Plympton Street will keep its name.

Former Mayor of Cambridge Francis H. Duehay ’55, who had been leading the campaign to change the name to “Halberstam Street”—in honor of journalist David L. Halberstam ’55—for the past 15 months, decided to rescind his proposal after Harvard alumni voiced their disapproval to him.

“It took us awhile to understand the attachment that the current students and alumni have to the name ‘Plympton,’” said Duehay, who thought of the following alternative only a month ago.

Duehay proposed naming a “park” after Halberstam instead. The park—which would be named “Halberstam Square,” should the full committee pass the proposal—is the unnamed, triangular enclosed area located on the median at the intersection of Linden and Mount Auburn Streets.

Halberstam, a former Crimson managing editor who later won a Pulitzer Prize for his coverage of Vietnam, was killed in a car accident in San Francisco in 2007.

In the original petition to change Plympton Street to Halberstam Street, Duehay wrote that “changing the street name to Halberstam would go a long way toward commemorating the high standards of journalism that David stood for.”

The former editors of The Crimson who attended the meeting were generally in favor of the new proposal.

John G. Wofford ’57, a former Crimson president, said that the timing of the park’s naming falls in line with the 45th anniversary of Halberstam’s book, “The Making of a Quagmire: America and Vietnam.”

Wofford said he was glad that “the proposal transformed a controversial idea into something that could receive widespread support.”

“We’re very excited that David Halberstam is still going to be honored and memorialized in Cambridge,” said Maxwell L. Child ’10, the current Crimson president. “Many generations of Crimson editors have fond memories of their time at 14 Plympton Street, and we felt to single out just one and change the name would not do justice to the hundreds of great writers that have passed through this building.”

The council members agreed to pass a favorable recommendation to the full committee, and a vote should take place before Dec. 21 to see that the naming comes to fruition.

Philip M. Cronin ’53, a Crimson trustee, told Duehay that he would receive support from the trust for funding a plaque and a ceremony commemorating Halberstam and the naming of the new park.

“He is the brightest star in the pantheon, and he died a tragic death,” said Vice Chair of The Crimson’s Graduate Board Francis J. Connolly ’79, “and certainly it is appropriate to find ways to honor such a distinguished journalist.”