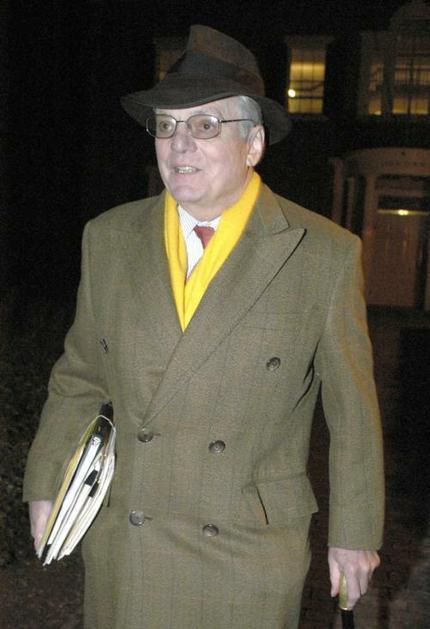 James R. Houghton ’58 leaves a meeting of the Harvard Corporation in Jan. 2007--just weeks before the body selected Drew G. Faust as the University's next president.
By Esther I. Yi, Crimson Staff Writer

Harvard Corporation Senior Fellow James R. Houghton ’58, who played a key role in the resignation of University President Lawrence H. Summers and presided over the appointment his successor, Drew G. Faust, will leave his post on the University’s top governing board at the end of the current academic year.

Robert D. Reischauer ’63, who joined the Corporation as a fellow in 2002 after concluding his six-year term on the Board of Overseers, will succeed Houghton as senior fellow, according to a University announcement of Houghton's decison released Monday afternoon.

With nearly a deacde and a half of service, Houghton is twice over the most senior member of the Corporation—the six-person body that oversees and advises Harvard’s president. He joined the board in 1995 and became its senior fellow in 2002.

Houghton is also an active member of several boards of directors of various companies, and the current chairman of the board of trustees at the Metropolitan Museum of Art. Upon graduating from Harvard Business School in 1962, Houghton spent much of his professional career at Corning Incorporated—a maker of specialty glass and ceramics—where he eventually rose to the top posts of chairman and CEO in in 1983, and again in 2002.

Houghton confirmed his plans for departure to his Corporation colleagues at their Dec. 7 gathering, wishing to make his announcement before the end of the month to jump-start the search for a replacement next year, according to the release.

In compliance with the University’s charter, the Corporation elects any new Corporation member with the counsel and approval of the Board of Overseers—Harvard’s second highest governing body. A joint committee of the Corporation and the Board will soon begin a search to fill the vacancy to be left by Houghton.

“It’s been a true honor to have been able to serve Harvard over the years,” Houghton is quoted in the release. “I believe that today, under the leadership of our distinguished president and with support from our other constituencies, the future of our ‘fair Harvard’ is bright indeed.”

“I’ve been around Harvard for more than 50 years, through challenge and change, and the wealth of talent in our community never ceases to amaze me,” added the former Lowell House history concentrator and active member of the A.D. final club, whose visage hangs on the wall of the upstairs bar room in the club’s house to this day.

Even before Houghton’s arrival on campus as an undergraduate, his family’s long-standing legacy at the school had already created a visible imprint—Houghton Library, the University’s rare book collection, reflected as much.

Upon graduating from the College, Houghton entered the Business School, where he reportedly received such poor grades his first year that he was forced to withdraw from the MBA program for two years. In his time off, Houghton worked for Goldman Sachs and Co.—he finally returned to Harvard to complete his MBA in 1962.

Two years later, Houghton began to work at Corning, a company founded by his great-great grandfather, and which he would later lead as chairman and CEO on two separate occasions.

Since stepping down as chairman at Corning for the second time, he has continued to play a role at the firm. He also remains a longtime trustee of the Corning Museum of Glass.