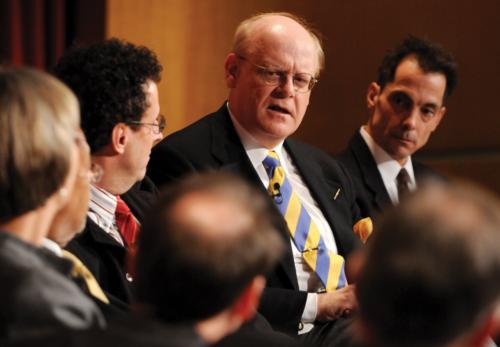 A panel of prominent scholars that included University President Drew G. Faust debated the complexities of Abraham Lincoln’s legacy before a packed audience at the Institute of Politics last night.

“Every generation of Americans since 1865 has fashioned a Lincoln to its own needs,” said Gates, who called the event a “celebration of the 200th birthday of our 16th and greatest President.”

The panelists presented varying portraits of Lincoln while debating issues ranging from Lincoln’s true role in freeing the slaves to his sexual orientation.

Kushner, who is currently working on a screenplay about Lincoln’s life, took a particularly sympathetic view of the famed president.

“I think he is just a tremendously moving and intriguing and wonderful presence,” Kushner said.

“It seems to me that the ‘healer Lincoln’ is who [Obama] has really been trying to appropriate, at least publicly,” Blight said.

A recurrent theme in the discussion was the fact the enormity of the Lincoln myth tends to overshadow the efforts of the slaves themselves towards their own liberation.

The event concluded with questions from the audience. Christopher A. Oland ’10 asked about Lincoln’s ability to influence others, and said he was pleased with the lengthy response he received from Guelzo.

“It seemed like he had a little bit of fun with it,” ,” Oland said. “I was really glad to get this insight about how Lincoln never fully revealed himself to people.”

For her part, Faust said she was glad of the opportunity to discuss Lincoln.

“It was fun to talk about history, and I’m honored to be on this panel with such distinguished scholars and writers,” she said. “I hope everyone enjoyed it as much as I did.”

—Staff writer Evan T.R. Rosenman can be reached at erosenm@fas.harvard.edu.