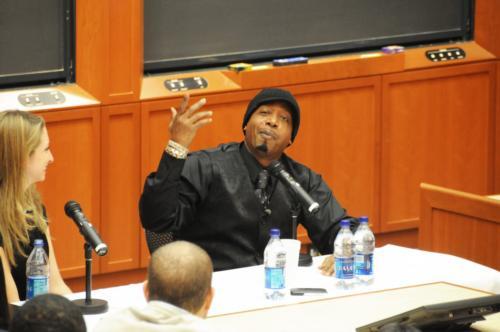 Stanley K. Burrell, better known as MC Hammer, the rapper famous for his 1990 single “U Can’t Touch This,” has made a new career of touching his fans through interactive websites and social media.

Yesterday, Burrell shared his knowledge on his new area of expertise before an audience at Harvard Business School, explaining how social media sites—such as micro-blogging service Twitter—can facilitate personal interaction in both business and music.

He added that social media, more than any other form of communication, excels in “shortening the distance between creator and consumer.”

As a celebrity in the modern world where information is on-demand 24 hours a day, Burrell said that social media like Twitter allows him to interact directly with the 90,000 fans that follow it.

“I would rather control my persona than to put my life or my persona in the hands of others,” he said.

The talk, which was recorded by ABC’s Good Morning America as part of a special series on the Twitter phenomenon, revealed an older, more business-minded Burrell than the rapper who was known for a meteoric rise and fall in the music world.

Burrell gave the audience an overview of his current business initiatives, which include DanceJam.com, a web community dedicated to publicizing dance videos, and “BurrellTime” iPhone application that allows his fans to follow his life in real-time.

“I’m building my social media ecosystem one peg at a time,” he said.

As an entrepreneur with an entertainment background, Burrell said that advertising was instrumental in highlighting artistic talent.

“At the end of the day, there are only so many notes, so many rhymes, so many keys on the keyboard,” he said. “The next thing is: who is the best marketer?”

Despite his burgeoning career in business, Burrell said the he retains an appreciation for the personal and entertainment value of his musical roots. He said that although a single nowadays has little value from a monetary perspective, “there’s an experience value to music, and music as a commodity is extremely valuable.”

Brooke J. Jenkins, a student at the Business school who called herself a long-time fan of MC Hammer, noted a contrast between the content of his talk and his public persona in the early 90’s, the height of his fame.