BASEBALL '09: Perlman Back to Lead Rotation 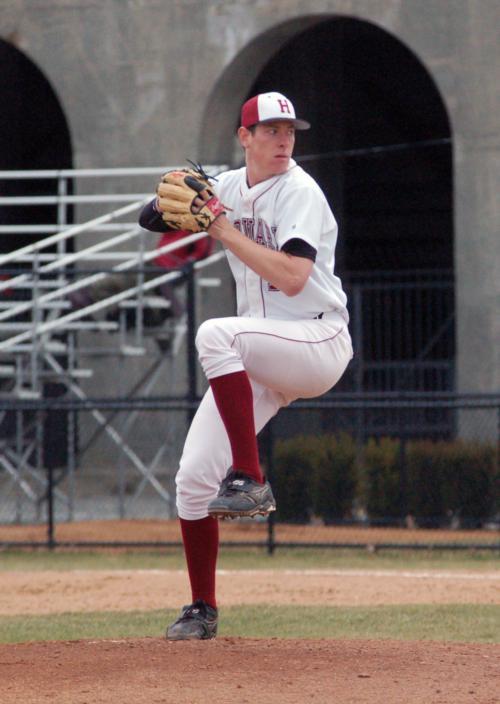 It’s the top of the sixth, and Max Perlman is in control.

Aside from a hit batsman and a pair of seeing-eye singles, Perlman has been flawless on the mound against Yale and holds a 4-0 lead, with Bulldog second baseman Justin Ankney leading off the inning.

After quickly getting ahead in the count, 0-2, the Harvard hurler looks to his best pitch—a nasty changeup—to put Ankney away.

Perlman sets, comes into his windup and tosses a meatball that Ankney deposits over the right field fence.

With his lead cut down to three, and the heart of a powerful Yale lineup coming up, no one would blame Perlman, a rookie, if his confidence were shaken—except maybe Max Perlman.

Not one for excuses, the 6’6 righty welcomes each of the Bulldogs’ 3-4-5 hitters up to the plate and sends each of them back to the bench with—you guessed it—that changeup.

After another perfect inning, Perlman has the win, and the Crimson has an ace in the making.

Now fast forward about two years to the present day. Harvard is set to kick off another season, Perlman is indeed at the top of the rotation, and the Crimson couldn’t be happier.

“It’s important for a team to have its ace pitcher,” Harvard captain Harry Douglas says. “We’re going to feel comfortable when he’s on the mound.”

But Perlman’s journey from promising freshman to the Crimson pitching staff’s go-to guy didn’t exactly work out as smoothly as either the player or team had planned.

At the end of Perlman’s rookie campaign, in which he led Harvard with five wins and a 2.91 ERA, the Longwood, Fla. native found out that coming back in 2008 for his sophomore season would not be an option.

After Perlman committed an undisclosed disciplinary infraction, the College asked him to take a year’s leave of absence. To complicate matters, bone spurs in the pitcher’s elbow would require surgery.

Forced to keep tabs on his team from afar as he rehabbed back home, Perlman watched the Crimson struggle mightily last season. Harvard stumbled through an abysmal 1-22 start, and finished the season 10-30.

“It was certainly tough to sit back and watch them have a bad year and know you can do nothing about it,” Perlman says.

Spurred by an unwillingness to once again stand idly by as his team faltered, Perlman worked tirelessly to ready himself for 2009. After completing rehab last May, he returned to New England to test that readiness on the biggest summer stage in college baseball: the Cape Cod Baseball League.

“Just to be in a league…where just about everybody’s going to play professionally, if not in the major leagues, it’s really pretty humbling,” Perlman says. “I didn’t know what to expect, not having pitched in a year. I didn’t know how my arm was going to respond to surgery.”

Perlman and his arm held up just fine. The lanky hurler made nine starts, going 3-1 with a 3.11 ERA. Perhaps even more telling, he finished tied for second in the league with 55 innings pitched.

Both healthy and effective, Perlman returned to Harvard last fall. A year of separation dissolved in what seemed like an instant.

“It’s like he never left,” Crimson coach Joe Walsh says. “The kid loves this place. He could have gone into a major ACC or SEC program and been in their rotation and he wanted to stay...he got that feeling after one year.”

Perlman did have to deal with a few logistical changes when he returned to Cambridge. Now he rides the Quad shuttle instead of rolling out of bed to make the quick walk across the Yard to class. He’s also switched concentrations from economics to government and sociology (“I couldn’t see myself on Wall Street,” he says). But Perlman’s real adjustment will come on the mound.

While Perlman posted the best numbers in the Harvard rotation his freshman year, former Ivy League Pitcher of the Year Shawn Haviland ’08 was the staff’s unquestioned ace and leader.

With Haviland graduated and making his way through the Oakland Athletics’ farm system, Perlman now bears the responsibility of taking charge of a pitching staff largely comprised of sophomores and freshmen.

But partly due to the knowledge imparted on him by his predecessor and mostly due to his own quiet confidence, Perlman expresses the willingness to take on a leadership role.

Haviland, who worked out with the Crimson for part of the preseason, believes he has left the Harvard rotation in good hands.

“[Perlman’s] a real smart kid and a big-time competitor,” Haviland says. “He’s unquestionably the No. 1 on the staff, and guys look up to him. It’s something he looks forward to being.”

As part of Perlman’s development into a true ace, the pitcher is looking to miss more bats this season.

He plans to tinker with his pitch selection and take more risks, in hopes that the flashes of dominance he displayed in his rookie campaign—like in that Yale game, where he struck out eight batters in seven innings—become a recurring theme in his outings this year.

“As a freshman, you want to come out and give your team a chance to win,” Haviland says. “This year, [Perlman]’s two years older and two years stronger.”

Perlman may have a big stage on which to make his return. A high-profile matchup against fellow Cape League alum Ben Tootle, the highly-touted fireballer with a knee-buckling breaking ball, headlines this weekend’s opening series at Jacksonville State. Perlman welcomes the challenge, and, in case there is any doubt about whether the Crimson hurler can go toe-to-toe with Tootle, Walsh provides a telling anecdote.

“One of the scouts,” Walsh begins, “I said to him, ‘How are we going to beat [Tootle]? Can we beat him?’ He says, ‘They’re getting worried about Perlman.’”

If Harvard’s new ace lives up to his potential, the rest of the Ivy League should begin to follow suit.

—Staff writer Loren Amor can be reached at lamor@fas.harvard.edu.