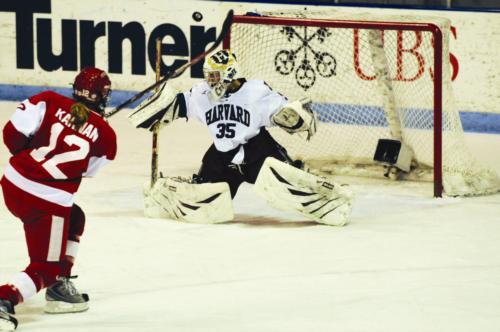 Junior goalie Christina Kessler leads a resurgent Crimson squad into playoff action this weekend. The standout is riding two consecutive shutouts and a .936 save percentage in another solid year.
By Kate Leist, Crimson Staff Writer

A year of ups and downs has all but been wiped away. Now, the No. 7 Harvard women’s hockey team is playing to extend its season.

Tomorrow afternoon at 1 p.m., on home ice at Bright Hockey Center, the top-seeded Crimson (19-9-3) will face off against sixth-seeded Rensselaer Polytechnic Institute (18-13-4) in the ECAC tournament semifinals. The winner moves on to play either No. 8 St. Lawrence or No. 9 Dartmouth for the conference championship on Sunday at 2 p.m.

For Harvard, the stakes couldn’t be higher. Win, and the Crimson’s in—to Sunday’s title game and, more than likely, the national tournament. Lose, and the team could easily be left out of the NCAA bracket.

“It is pretty much do or die at this point in the season,” sophomore Kate Buesser said. “It’s the playoffs, so every team is going to be bringing their best.”

Of the four teams still alive in the tournament, Harvard had the easiest time in the quarterfinals, blanking Cornell in consecutive contests. But the upstart Engineers enter the game with some momentum as well, coming off a weekend sweep of third-seeded Princeton.

In just its third season in the ECAC, RPI is playing in its first championship weekend. Like the Crimson, the Engineers have had a streaky season, but they charge into tomorrow’s game having gone 6-0-1 in their last seven conference games.

When the teams met at Bright in November, RPI scored with 18 seconds left in regulation to earn a 1-1 draw with Harvard. The Crimson exacted revenge in January with a 5-4 win, but once again let the Engineers come back in the game’s final minutes.

“[We just want] to play 60 minutes of hockey, or however long it takes,” Harvard coach Katey Stone said. “They’re a good team…they’re not going to quit, and our players know that. They’ll be ready to play.”

RPI’s recent success is due in large part to goaltender Sonja van der Bliek. Over the course of the Engineers’ latest win streak, the sophomore hasn’t given up more than one goal in any game, recording a .967 save percentage to go with a miniscule 0.84 goals-against average.

“We know that RPI has been riding a very hot goaltender lately, and we know they are a really good team,” Buesser said. “But we are ready.”

The Crimson’s got a hot goaltender of its own in Christina Kessler. The junior, who was named to the All-ECAC Second Team this week, made 62 saves last weekend in back-to-back shutouts.

“Kessler’s doing everything she needs to do for the team,” Stone said. “Her contribution is the same as anybody else’s—keep it simple, do the things you do well—and she’s doing that for us at a good time.”

Kessler’s the anchor of a Harvard defense that ranks fourth nationally and fifth on the penalty kill. In its last 61 man-down situations, the Crimson has scored as many goals as it has allowed (two).

Though tri-captain Sarah Vaillancourt, named ECAC Player of the Year and a finalist for the Patty Kazmaier Award this week, continues to pace the Harvard offense, it’s the depth of the team’s attack that will be crucial as the postseason continues.

“Everybody did their job [last weekend],” Stone said. “We got scoring from multiple lines, and special teams were very good, so hopefully we can continue that. The main thing is that we continue to play our game.”

The Crimson also benefits from home-ice advantage in the tournament for the second year running. Last season, the fans at Bright helped propel Harvard to a 3-2 overtime victory over St. Lawrence in the championship game.

“It’s awesome, and to have earned it down the stretch, how well we played the second half of the season—it makes a difference,” Stone said. “It’s great to be able to play in front of your own fans and band.”

A possible rematch with the Saints in the title game isn’t far from the team’s mind.

“We recently played against St. Lawrence, and I don’t think they brought us their best game,” Vaillancourt said. “If we play them in the final, they will definitely bring their best game, and it’s going to be a really tough game to play.”

But to get there, the Crimson must take care of business tomorrow. With so much on the line, Harvard can’t afford to take the Engineers for granted.

“You just try to win your next game—that’s your focus, and that’s what you hope to accomplish,” Stone said. “We’re just trying to win our next hockey game.”