Fifth-seeded Crimson must beat Bears to advance in ECAC’s 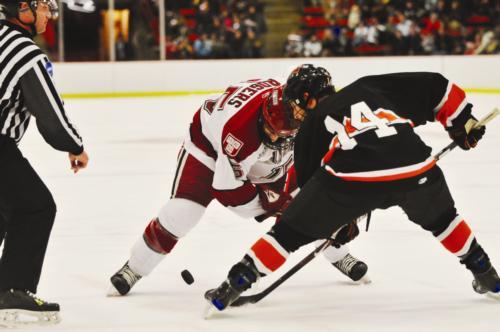 Junior forward Doug Rogers will look to spur Harvard to victory in the best-of-three opening round of ECAC’s this weekend. Rogers will likely be instrumental to the Crimson’s success, as the third-year star leads the team in goals and total points with ei
By Courtney D. Skinner, Crimson Staff Writer

The Crimson’s stalemate with Brown will finally end with a clear winner, as the Harvard men’s hockey team plays host to the 12th-seeded Bears in the first round of the Bank of America ECAC Tournament this weekend.

The best-of-three series begins tonight at Bright Hockey Center and will determine who advances—and also who goes home.

Despite the Bears’ place in the standings, Harvard is taking this series seriously.

“At some point it doesn’t really matter how you finish, but how you’re playing at the time,” co-captain Jimmy Fraser said. “They’re an experienced team, they’re on the older side, and they’re physical. It’s going to be intense for us, and we’re not going to underestimate them.”

Once again, the Crimson will have to withstand Brown’s strength on the power play.

In both contests this season, Harvard gave up a number of untimely power play chances in the third period, allowing the Bears to tie with the conversion point.

Despite moments of brilliance, such as a 5-minute penalty kill in last Friday night’s nail-biter against Quinnipiac, the power play has been the Crimson’s Achilles heel for much of the season.

“If you look back at both regular-season games, they beat us on the special teams, and as a result, we only got a point each time,” Fraser said. “So if we concentrate on special teams now hopefully we can come up with the win.”

But while any playoff game should not be taken lightly, Harvard is not the same team as it was in January, when the rivals last faced off.

Then, the Crimson was still waiting to snap a ten-game winless streak, giving up unnecessary penalties, and failing to put enough pucks in the net.

After giving both the No. 1 and then-No. 15 teams a run for their money in the Beanpot Tournament, though, Harvard has been on a hot streak—while the Bears have been on the decline, losing 12 of their last 15 games.

It seems that the Crimson has a tradition of late-season rebounds. Under Harvard coach Ted Donato ’91, the team has gone 27-5-4 in regular league play in February and March, and has posted a record of 11-0-4 in its last 15 post-Beanpot games in the regular season.

“In my four years here it seems to be the way the season has panned out,” Fraser said. “I don’t have a true answer for you [as to why that’s the case]. [But] it’s better to be going well at the end of the season than at the beginning and middle, that’s for sure.”

The Crimson’s current late-season streak closely mirrors the 2008 team’s post-Beanpot turnaround. Last year, after a close overtime loss in the Beanpot Championship, Harvard went 5-0-1 for the remainder of regular season play and advanced to the ECAC tournament finals before giving up a 4-1 loss to Princeton.

This season, since the Crimson’s last-minute Beanpot losses to national powerhouses Boston College and Boston University—the top-ranked teams of 2008 and 2009—Harvard has made another comeback.

Going undefeated in its last six games, the Crimson managed to best league-leaders like Cornell and No. 6 Princeton to secure fifth place in the ECAC. And it doesn’t look like Harvard plans to stop there.

“I think [our opponents] look and see a team that’s hot and really starting to play well,” junior forward Doug Rogers said. “I’m sure teams know we’re a force to be reckoned with, and they’ll give us their best game.”

Although the Crimson was not able to secure a playoff bye, the squad seems undeterred and is simply eager to let the games begin.

“Looking down at the standings, I shouldn’t say I was happy we didn’t get a bye. It would’ve been nice to have the weekend to rest, but I only have so many games left in my Harvard career,” Fraser said. “If you’re going to win, you’re going to want to win in two rather than three. It’s my last couple home games ever in a Harvard jersey, so I’m looking forward to seven o’clock.”

—Staff writer Courtney D. Skinner can be reached at cskinner@fas.harvard.edu.