After a disappointing loss to Princeton in last year’s ILCS, Harvard enters ’09 with a chip on its shoulder. But with veteran leadership and fresh talent, the Crimson is poised to take back its title 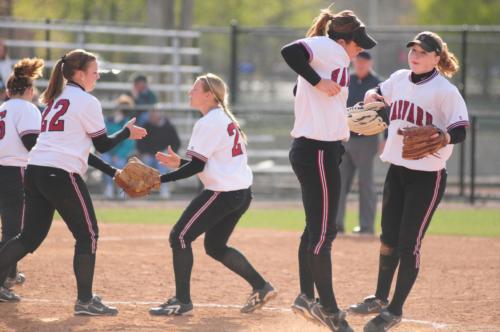 When one wants to see a championship-caliber squad, there is no need to look any further than the Harvard softball team.

Winners of the 2008 Ivy League North Division title—and runners-up in the Ivy League Championship Series—the Crimson has a great amount of all-around talent. This year, the players are not willing to settle for second-best like they had to last season. They are ready to go all the way and reclaim their title.

“To lose to [Princeton] in the Ivy championship was just heartbreaking,” co-captain Bailey Vertovez says. “Coming out, our opening Ivy games are Cornell and Princeton, at home this time. We’re going to be out for revenge in [the Princeton] game, definitely.”

Under the leadership of head coach Jenny Allard and co-captains Hayley Bock and Vertovez, the Crimson will try to continue its success with the same core group of players intact and what promises to be an exceptional freshman class.

“It’s an ingredient of success to have strong leadership and veterans, and we have that this year,” Allard says. “We have an influx of very strong freshman talent, and we have a lot of returners who have been starters and major contributors, so that just lends itself to a good, experienced squad.”

With the graduation of pitchers Shelly Madick ’08 and Amanda Watkins ’08, Harvard lost two of the best pitchers in its rotation. But this is where the depth of the pitching staff becomes important. With the addition of three new freshmen to the already experienced corps of Vertovez and juniors Margaux Black and Dana Roberts, the rotation looks as solid as ever.

“Shelly just had this presence on the mound that was just total domination, and Amanda was just a great motivator,” Vertovez says. “But we’re going to get to that [championship] level, despite losing those two pitchers.”

With Danielle Kerper ’08 being the only other graduate, the defensive lineup remains pretty much the same. While Kerper’s presence at first base will be sorely missed, the same group of players that made up the Ivy League’s best defensive team last year is back and ready for business.

On the other side, the Crimson offense is led by sophomore Ellen Macadam, who rocked the Ivy League last year, posting a .371 average in her first year of collegiate softball. With 18 stolen bases, she was second in the Ivies only to fellow sophomore Emily Henderson. Henderson was dominant in the leadoff spot, hitting .319 and collecting a program-record 28 steals on her way to an All-Ivy First Team selection.

“[The sophomores] are the fastest class we have,” Bock says. “Their speed on the bases will generate runs alone just on stolen bases...With both of them on the bases, we’re going to be unstoppable.”

The Crimson opened its season last weekend at the Quality Inn & Suites Invitational in Denton, Texas, where it split with both Kansas and North Texas. Harvard got off on the right foot with a 3-2 walkoff victory in the season opener against the Jayhawks—the team’s first season-opening win since 2005.

“We’re ready for more wins,” Vertovez says. “The teams that we played [last weekend]—they beat Arizona and they beat Cal, so they’ve beat some top teams. To come out and show ourselves that we can beat those teams [was exciting].”

The Crimson will play in two more pre-conference tournaments before opening its Ivy slate in late March.

“This year, we’re going to face some tough teams in preseason,” Allard says. “I felt that last season we played a lot of ranked teams early and overall a tougher preseason schedule. It’s still very tough competition this year, but not as many ranked teams.”

Even though Harvard has a challenging schedule to start off the season, it has proven that its early-season record is not necessarily indicative of its play during the rest of the spring. After going 1-9 to start off last season, Harvard dominated in league play to end the season with a 25-22 record.

The Crimson’s potent offense will also benefit from the arrival of new hitting coach Brandi Gordon.

And without the pressure of having to defend the Ivy League title, Allard believes that her seasoned squad has the confidence and maturity to control its own destiny.

“Our focus this year isn’t necessarily on who we’re playing and what they’re doing—it’s on our game,” the coach says. “We want to face tough competition, and if we lose a game, we want to get beat, not lose it ourselves because we haven’t played to the best of our ability.”

Harvard hopes that its unique combination of veteran leadership and young talent will be the right recipe to bring the Ivy title back to Cambridge.

“Every year we usually click together, but this year especially...it’s hard to tell who’s a senior and who’s a freshman at this point,” Vertovez says. “We’re adding a bunch of specialty plays, which we wouldn’t have done in past years. We’re bringing our game to the next level.”