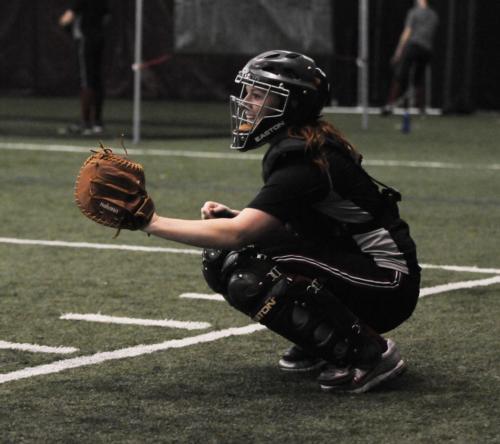 If you thought the rhyming first names of softball captains Hayley Bock and Bailey Vertovez were indicative of similar personalities, you couldn’t be more wrong.

Bock’s years behind the plate have developed her into a more vocal and prominent leadership presence on the field. On the other hand, Vertovez has emerged as the team’s primary organizer behind the scenes.

“[Vertovez] can be more vocal off the field, and she has a really good sense of the team pulse and how things are going,” Bock says. “I’m a little bit louder on the field. I’m a little bit harsher with the team, as far as yelling or executing things. We work really well together, and what one may lack, the other one makes up for in leadership skills.”

But while the two differ in their approaches to the captain’s role, the senior duo ultimately represents two sides of the same coin: they share a desire to recapture the Ivy title and avenge last season’s disappointing loss to Princeton in the league championship series.

“Obviously, every year we want to win the Ivy title, so we’ve gone [into the season] thinking that,” Vertovez says. “To lose to [Princeton] in the Ivy championship was just heartbreaking.”

The captains will have to find a way to guide their team to the Ivy championship this year without all of the luxuries that come with a large senior class—players used to the rigors of the league and the styles of the coaching staff. The class of 2009 started out as a small group in its freshman year with just four recruits, and only Bock and Vertovez remain.

Three years of trial by fire in the Ivy League have honed the duo’s talents into two very different and specific roles on the team, with Bock as starting catcher and Vertovez likely to see time at both shortstop and on the mound this season.

Returning as the starting catcher for the fourth year running will be Bock, who was named the team’s Best Defensive Player and an All-Ivy League Second Team pick last year.

The senior had caught 22 runners trying to steal a base entering the 2009 season, and Bock gunned down two in the team’s opening tournament against Kansas and North Texas to tie Harvard’s all-time record.

“Hayley, she leads kind of by example,” freshman pitcher Rachel Brown says. “She’s such a competitor, and...it’s amazing to have her on the field [as a catcher] because she sees everything. She’s a smart player, and she’s awesome to have there.”

Unlike Bock, Vertovez has taken a more circuitous route to her captain’s role. Though she was recruited as a pitcher, she has spent most of her collegiate career as a utility starter, getting time at five different positions.

In her junior season, Vertovez started all 47 games—mostly at shortstop—but also saw some time on the pitching mound.

“Bailey’s awesome,” Brown says. “She’s so friendly and so bubbly. If I have any questions, I can go to her, and she’s just really encouraging. Everything she says, whether it’s constructive criticism or anything, it’s said in a way that is just so helpful. Especially as a freshman, she did a really good job of making me feel like a part of the team.”

Bock and Vertovez’s complementary personalities have been vital to the team’s development off the diamond.

“They’ve done a great job of creating a very supportive network and good team culture where people feel a part of the group,” Allard says.

The captains are ultimately united in their goals for the team this season, and their leadership should prove to be the driving force behind the team’s success.

“We play off each other really well, and we’re great friends, which helps a lot—to be able to talk to each other and provide a unified front to the team when we have a problem or something we need to work out,” Vertovez says.

—Staff writer Lucy D. Chen can be reached at lucychen@fas.harvard.edu.