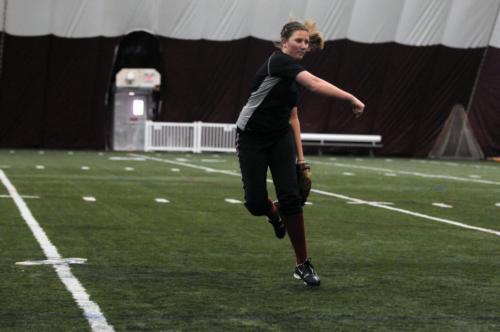 If there was one question heading into this season for the Harvard softball team, it was pitching. After the departure of star Shelly Madick ’08 and her classmate, Amanda Watkins, the mound was the one position on the field where the Crimson didn’t have a seasoned veteran.

It seems like that’s a question that’s now been answered.

Freshman Rachel Brown got the call in Harvard’s season opener last Saturday against Kansas, and the rookie showed that she’s more than ready to step into Madick’s shoes.

Brown pitched two complete games in her first two collegiate starts, giving up a combined eight hits while striking out 21.

“Rachel is dominant,” co-captain Bailey Vertovez says. “I would not want to hit against her.”

Brown’s no stranger to the circle: the San Diego native has been pitching since she was eight.

“I was on a rec team, and they didn’t have any pitching,” Brown says. “My dad was the coach, so he just started me off.”

That was the beginning of an impressive youth career that culminated with her setting the single-season San Diego CIF strikeout record and being named Division II Pitcher of the Year in her senior season.

In her first few weeks in crimson and white, Brown has already impressed her coaches and teammates with her command of the position.

“She has a great rise ball, unbelievable really, and she mixes up everything in her repertoire,” Vertovez says. “It’s very exciting to have her on the mound.”

“I love setting the tempo for the game, and being in control,” Brown explains. “It does take technique, but it’s a really mental position and it does take a lot of focus.”

The fate of the Crimson’s season rests in part on the shoulders of Brown and her classmates, Julia Moore and Marika Zumbro, as they work to fill the holes left by Madick and Watkins.

“I think one of the ingredients of our success this year is going to be our freshman pitchers,” Harvard coach Jenny Allard says. “You’ve got to be strong on the mound to start. [Rachel’s] a very strong, seasoned pitcher.”

Brown is certainly up for the challenge. In her second start, she was charged with the task of helping the team rebound from two rough losses. But the rookie performed admirably under pressure.

While Brown may have emerged in the season’s first weekend as the pitcher to watch, she is joined on the staff by a wide range of talents.

Most notable among them is Vertovez, who is returning to the mound this year after spending much of her Crimson career playing in the field.

“I was recruited as a pitcher—I pitched my whole life, ever since I was nine years old,” Vertovez says. “They needed me in the outfield freshman and sophomore years, and last year we didn’t have a shortstop so I assumed that role, but I’m really excited to get back to the mound, to have control of the game. That’s what I loved about it from the beginning.”

Most notable about Vertovez, though, is the ease with which she changes roles on the team.

In the two games where she didn’t pitch last weekend, she found her way into the lineup as the starting shortstop.

As a captain, Vertovez has also assumed the responsibility of leading the pitching staff, a job that once belonged to Madick.

“[Madick’s] irreplaceable, but getting to that level will be something I’m going to take on myself,” Vertovez explains. “We have three freshman pitchers, so I’m trying to get that attitude, trying to get them to see what it’s like to have that sort of presence in the circle.”

Moore and Zumbro were also called upon in their first collegiate weekend. Moore impressed in 2.2 innings of relief work, and though Zumbro endured a rocky start to the season, giving up six runs in two-thirds of an inning, both will be valuable members of the Crimson staff.

“[Zumbro] has a great drop ball, which just drops off the table—it’s impossible,” Vertovez says. “And [Moore] throws so hard.”

Harvard is also bolstered by two junior pitchers, Dana Roberts, who is recovering from surgery, and Margaux Black.

“[Roberts is] a great pitcher—when she’s on, and her arm is healed and all better, she’ll be a good closer,” Vertovez explains. “And [Black’s] a good complement for Rachel and [me], who throw mostly rise balls. We’ll have Margaux come in, who throws mostly drop balls, and throw them off.”

But from top to bottom, it’s the Crimson’s depth and talent that will dictate the team’s success this season.

“Everyone’s going to be an ace of the staff,” Allard says. “We want to make sure that everybody’s out there and capable of starting a game and going the distance.”