Faced With Deficit, FAS To Restructure 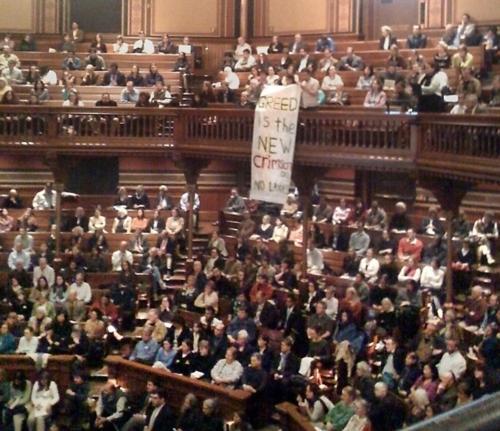 Faculty, staff, and students gather in Sanders Theater for a town hall meeting, which was led by Dean of the Faculty of Arts and Sciences Michael Smith, to discuss the effects of the financial downturn on FAS.
By Bonnie J. Kavoussi and Esther I. Yi, Crimson Staff Writerss

In response to a looming deficit of $220 million for the Faculty of Arts and Sciences over the next two years, FAS Dean Michael D. Smith called for a broad-based restructuring of the University’s largest school at a town hall meeting yesterday.

“I do believe it is extremely important for us to think deeply about how we not only re-size our activities, which is most of what we’ve done today,” Smith said. “Now is the time to really start thinking about reshaping these activities.”

Smith also announced that 153 of the 521 eligible FAS staffers have accepted the early retirement incentive package, yielding a participation rate of about 30 percent—double that of a similar program recently conducted at Dartmouth. In the next few days, the administration will begin to analyze the savings of the program, which drew to a close Monday, according to Smith.

During the question-and-answer portion of the meeting, multiple audience members expressed concern about the possibility of staff layoffs. Though Smith did not explicitly presage job cuts, he said some FAS jobs may no longer be necessary, as he cited the “huge” deficit on the projector screen.

“I have no desire to do layoffs, but it’s increasingly likely as we work to reshape the environment, that we will not have a need for as many faculty or staff as we do today,” Smith said. “We’re going to have to address this new reality.”

Next year’s projected deficit of $130 million has been compounded by last month’s announcement that endowment funding for Harvard schools—which contributed 56 percent of the FAS budget this year—will fall 8 percent for the next two years, raising the two-year deficit even higher.

In response, FAS administrators have begun planning around a 12 percent decrease for the fiscal year ending in 2011 in case endowment funding plummets further, according to Smith.

“As you might imagine, this is a huge change—a painful change,” the FAS dean said.

FAS has already achieved $4 million of savings in the past six months, and proposals for 15 percent cuts submitted by departments and units would produce a $73 million reduction if approved for the next academic year. But the cuts would eliminate only one third of the overall deficit facing FAS.

Within the next two weeks, Smith said he will appoint six working groups charged with proposing cost-reduction measures for their respective areas in FAS—including the three academic divisions, the School of Engineering and Applied Sciences, and the College.

“These are not working groups put there to try to squeeze more efficiency from the system,” said Smith, who stressed that the groups would seek to make academic programs more cost-efficient while maintaining the quality of education.

“I’m looking for these groups to get together and think creatively, outside the box, with respect to how we can do things differently from an intellectual and academic point of view,” Smith added.

During the question-and-answer session, a few professors expressed frustration that the entire school has had to cut back in part due to a spending spree in recent years that focused on campus and faculty expansion.

“In retrospect, we would think that bubble money was not spent in the right way, and therefore we shouldn’t take the bubble money as the base from which we make cuts,” Government Professor Robert D. Putnam said, followed by a round of applause.

But Smith said that as the expansions had already taken place, such criticisms would do little to remedy the current situation.

“I’d be happy to get the information on what we looked like five years ago, but it’s a new time,” Smith said. “I think very much we need to reshape ourselves in terms of what we need to do in the future and not just what we were doing in 2005.”

Staffers interviewed after the meeting said that although they appreciated the open format of the town hall, they remained skeptical about Smith’s level of transparency.

But some attendants said that the town hall meeting provided insight into the severity of the FAS deficit.

“We give Dean Smith many points for sitting there and taking these questions,” said Nancy L. Rosenblum, chair of the government department. “He was quite honest and told it like it was.”