Mormon Church Goes Up in Flames 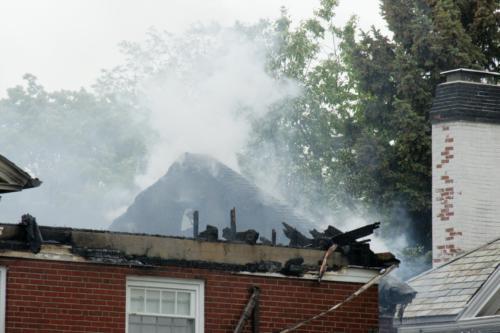 Flames engulfed the Church of Jesus Christ of Latter-Day Saints off Brattle Street yesterday morning, evicting at least 500 people and reducing the building to a skeleton of walls, a dusty steeple, and a chasm of seared wood.

Churchgoers safely evacuated after a fire erupted in the attic of the church, which was built in the mid-1950s. The fire eventually collapsed into the interior of the building, issuing plumes of smoke that could be seen from Harvard Square.

“I was baptized here, met my husband here, and had his funeral here,” said service attendant Ruby I. Von Dwornick, her voice breaking as she stood before the remaining walls of the church. “It was heartbreaking to see it be destroyed.”

Fire departments from nearby towns joined the Cambridge Fire Department to fight the flames, which were quelled sometime after noon. The cause of the fire remains under investigation, but church members posited faulty wiring, antiquated electrical systems, and even lightning strikes as possibilities.

A structural engineer will inspect the church’s remains today to determine whether the building can be rebuilt or should be destroyed, according to Brad R. MacDonald, assistant to the president of the Cambridge stake, or administrative unit of the Mormon church. Ultimately, the church will likely rebuild in the same location, a process that could take at least a year and a half, MacDonald said.

Mormons from across Cambridge were gathered yesterday at the Cambridge church—one of the first Mormon churches established in Mass.—for a special service broadcast live from Salt Lake City. But at 10:37 a.m., shortly into the second sermon, fire alarms began to ring.

Attendants evacuated the chapel within minutes, though most did not take the alarm very seriously, according to congregation member Sean L. Little, who said he did not smell any smoke in the chapel at the time.

“We just thought someone pulled the alarm,” Little said. “But as we filed out of the doors, we saw the smoke coming out of the roof and realized it was real.”

Once outside, Dwornick said she noticed a gradually spreading “ball of flame creeping out from underneath the roof.” She said a firefighter eventually sawed a hole in the roof of the chapel, instigating an explosion of flame that travelled a third of the way up the steeple and engulfed the chapel in which she had been moments before.

“This is my home church, as far as I’m concerned,” Dwornick said. “I’m very grateful I got to attend church here the last day it stood.”

“It’s a very sad day,” said Gordon K. Low, president of the Cambridge stake, as he stood on the lawn in front of the smoldering building. “There are thousands of members of the church in New England whose experiences are here in this building.”

As firefighters continued to pour water into the charred interior of the church late yesterday afternoon to prevent possible flare-ups, church members lingered outside the building to share hugs and distribute bags of chips.

“It’s a big, robust church community here,” Low said. “We’ll rebuild and get this back to the point where we’re operating efficiently as a chapel.”

In an effort to salvage historical books left inside the destroyed church, some congregation members formed an assembly line to pass down books that survived the flames. A neighboring Quaker church and the repository at the Harvard Divinity School have offered to hold the items until the church finds a space of its own, MacDonald said.

Low expressed his gratitude to the multiple congregations for their gestures of consolation and aid. Members of the destroyed church will likely disperse to different Mormon churches in the area in future weeks.

But leaders of the church are confident that the destruction of the building is only a physical loss.

“It’s certainly devastating but I think the church is always prepared to rebuild and continue its mission,” MacDonald said. “We can always rebuild if we want to—in a metaphorical sense.”

—Staff writer Esther I. Yi can be reached at estheryi@fas.harvard.edu.