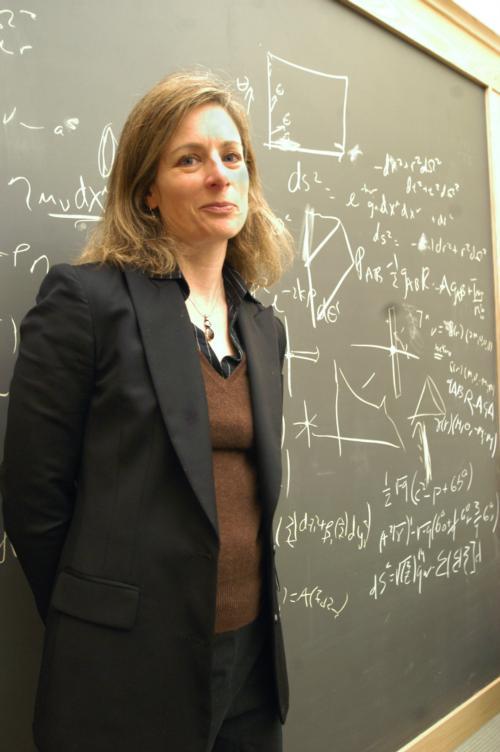 As a college freshman, Lisa J. Randall '84 stood out for many reasons. In her first semester, she enrolled in Math 55 and Physics 55, the most difficult freshman math and physics classes offered.

But Randall also stood out for another reason—she enjoyed one of Harvard’s most reviled classes, Expository Writing 20.

“It taught me to think about what people were saying in a really different way,” Randall said.

This ability to thrive in any academic environment reflects the curiosity that characterizes Randall’s intellect. This trait, along with a penchant for original thought, have defined Randall’s celebrated career as a theoretical physicist.

Over the past two decades, Randall has made significant contributions to the study of particle physics, supersymmetry, and cosmology. Her theories on the existence of extra dimensions have made her one of the most famous scientists in the world.

Randall has also changed the popular conception of a physicist. Before coming to Harvard in 2001, Randall had already become the first tenured woman in the Princeton physics department and the first tenured female physics theorist at MIT.

Randall grew up in New York City in the 1970s and attended Stuyvesant High School, a magnet school that focuses on math and science. In her early years, she was interested in a wide array of subjects. Though she described herself as a voracious reader, she was particularly drawn to math.

“I liked it because it had definite answers,” Randall said. “It might have been the fact that I grew up in volatile times in New York City, so I liked the certainty of knowing which answers were right.”

When it came time to choose a college, Randall said she wanted a liberal arts education because of the breadth of her interests and her desire to meet different types of people.

After arriving at Harvard, she threw herself into her studies and finished her undergraduate career in three years, graduating Phi Beta Kappa. From there, she began working on her physics Ph.D., under the guidance of Harvard physics professor Howard M. Georgi ’68, who had previously instructed Randall in Physics 55.

“Some theoretical physicists are terrific at mathematical or geometrical imagination. Some are better at imaginative thinking about the actual phenomena,” Georgi wrote in an e-mail. “Lisa is great at both.”

During this time, Randall began to learn about building models of the physical universe, and she participated in research on why our universe is formed out of matter, rather than antimatter.

Her talent for understanding physical models would be a strength in much of her subsequent work.

Randall first became interested in the study of extra dimensions about 10 years ago. Collaborating with Johns Hopkins University professor Raman Sundrum, Randall began exploring the geometry of space and time. The pair quickly came to some startling results.

“They were so radical, we wanted to make sure we were right,” Randall said.

Using complicated math, Randall then showed that space and time could be warped. She argued that our universe exists in a three-dimensional “brane” within a higher-dimensional universe.

The theory, first published in 1999, jolted the physics world. Among the many intriguing implications of this model is an explanation for why gravity is so weak compared to the other fundamental forces. According to Randall, the strange geometry of these higher dimensions could mean that gravity varies between the dimensions, and happens to be weak in our three dimensional brane.

Since rising to prominence with this theory, Randall has been listed as one of Time Magazine’s 100 Most Influential People in 2007, and has been featured in publications as diverse as “Scientific American,” “Newsweek,” and “Vogue.”

THE WOMAN BEHIND THE PHYSICS

Speaking to Randall’s many colleagues and friends, it is startling just how many talents and interests they ascribe to her.

Northeastern physics professor Darien Wood fondly discusses their rock-climbing outings together, while writer Anna Christina Buchmann describes their trips to the ballet, and Harvard economics professor Kenneth S. Rogoff says he is wowed by her understanding of the financial crisis.

Lisa’s younger sister Dana J. Randall ’88, a computer science professor at Georgia Tech, said Lisa has “always been fascinated by people who can multitask and do many things,” perhaps because she is one, herself.

“She is extremely interested in new things, and she’s so quick and she’s so curious but she doesn’t have that stage of intimidation that most people have,” Buchmann said. “There is no pause, she just plunges.”

Randall said it was due to this breadth of interest that she opted to write a book and the lyrics to an opera in recent years.

The process of writing “Warped Passages: Unraveling the Mystery of the Universe’s Hidden Dimensions” presented her with “the challenge of trying to use references people would recognize and appreciate,” Randall wrote in an e-mail,. “I certainly had a lot to learn about writing.”

After the book’s publication, Randall was contacted by a composer who wanted to collaborate on an opera. The project would require Randall to write all the lyrics for the show. Randall decided to approach the challenge the same way she approaches physics.

“I like these types of problems where you’re trying to be creative, but you have to conform to certain constraints,” she said.

The show, an hour-long opera for two performers, will premiere in Paris this summer.

Randall said she plans to continue teaching both a freshman seminar and graduate student courses, as each is rewarding in its own way.

Randall will also continue to do research in a wide variety of fields, and she said she plans to explore her theory of extra dimensions “as long as there is new material to be covered.”

As to side projects, Randall said she spent much of her career focusing almost exclusively on physics—and she is enjoying trying her hand at new things. Those around her seem certain that she will choose her activities very carefully, as only the most enticing projects can draw her away from her research.