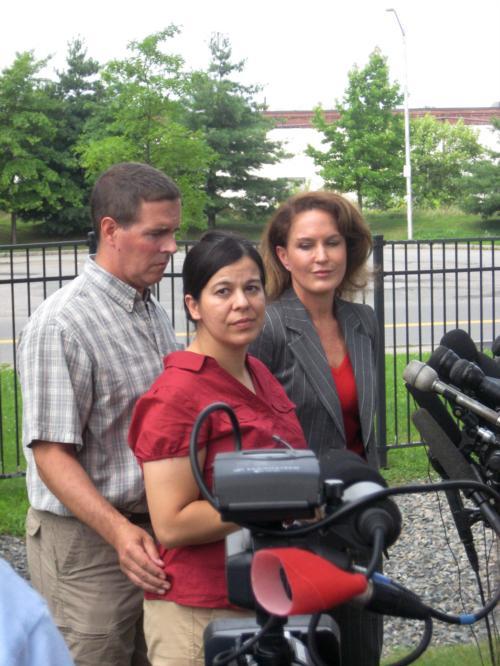 Lucia Whalen, the woman who called 911 and sparked the national controversy over the arrest of Henry Louis Gates, Jr., addresses reporters at a Cambridge press conference on Wednesday. Whalen, accompanied by her husband Paul and lawyer Wendy Murphy, said
By Peter F. Zhu, Crimson Staff Writer

Lucia Whalen, the Harvard Magazine employee who called police two weeks ago about the possible break-in at professor Henry Louis Gates, Jr.'s home, spoke publicly for the first time Wednesday, saying at a press conference that she had been deeply hurt by accusations that she is a racist.

"I was frankly afraid to say anything," said Whalen, who seemed to be fighting back tears at times and was visibly shaken. "People called me racist and said I caused all the turmoil that followed, and some even said threatening things that made me fear for my safety. I knew the truth but I didn't speak up right away because I did not want to add to the controversy."

Whalen had been cited in a police report of the incident as saying that she saw "two black males with backpacks" trying to enter Gates' home. But tapes of the 911 call and the police radio transmissions released on Monday show that Whalen, who was actually calling police on behalf of an elderly woman at the scene, did not mention race in her call. She noted repeatedly to the police dispatcher that she did not know if the men lived at the home and were simply having trouble with their key, and only said that one of the men might be Hispanic when asked by the dispatcher.

"I was a target of scorn and ridicule because of the things I never said," Whalen told reporters at Cambridge's Danehy Park. "The criticism hurt me as a person, but it also hurt the community of Cambridge. Now that the tapes are out, I hope people can see that I tried to be careful and honest with my words."

Whalen declined to discuss specifics of what she saw at the scene and if there was a commotion. She told reporters that she was born in the United States and is of Portuguese descent, and that she knew of Gates but failed to recognize him when making the 911 call.

The two men that Whalen saw were actually Gates, who was returning home from a trip to China, and his car driver, who was helping the professor carry his luggage and force his way through a jammed front door.

Whalen also said that the only words she exchanged with Sgt. James Crowley, the officer at the scene who made the arrest, were, "I was the 911 caller." She said that he pointed at her and told her to "stay right there."

Whalen's call and Gates' subsequent arrest, which some suggest was the result of racial profiling, sparked a national controversy and dialogue about race relations. President Barack Obama, who initially said that Cambridge police "acted stupidly" in arresting the professor at his own home, later expressed regrets about his choice of words and is now scheduled to meet with Gates and Crowley at the White House Thursday evening over beer.

Whalen said that she had not planned on making public statements about the incident, but changed her mind after the media contacted her mother. Whalen's lawyer and spokeswoman, Wendy Murphy, told reporters at the press conference that Whalen would not be giving any one-on-one interviews and asked the media to "leave her alone" and respect her privacy.

Murphy said that her client—"the one person who did not overreact, a woman with no special training who nevertheless did everything right"—had not been asked to join Obama, Gates, and Crowley—"the three highly trained guys who reacted badly"—at the White House. She said that Whalen "doesn't like beer anyways" and joked that "maybe it's a guy thing," but added that she thought it was "strange" how little positive attention has been paid to Whalen.

"The one person who should probably get an award has been ignored, and I dont know if that's right or wrong—I just think it's an interesting observation," Murphy said. "What [Whalen] did was exemplary, and there has been zero attention paid to that from anyone in a position of authority."

Whalen, who was accompanied at the press conference by her husband, said that she has reflected on the incident and would absolutely call police again if placed in the same situation, despite the emotional pain of the past week.

"Citizens should be aware of what's happening in their community, to be honest with you," Whalen said. "If that's a lesson to be learned, people should look out for one another, absolutely." She also emphasized that she continues to respect Gates and the Cambridge police, and that she hopes the incident will encourage people to look at the facts and be more careful in judging others.

"I've always been taught to be kind to people and not to judge people, so I would hope others would do the same," Whalen said. "I think it's a basic core value to have."