The Best Cheap Eats in the Square 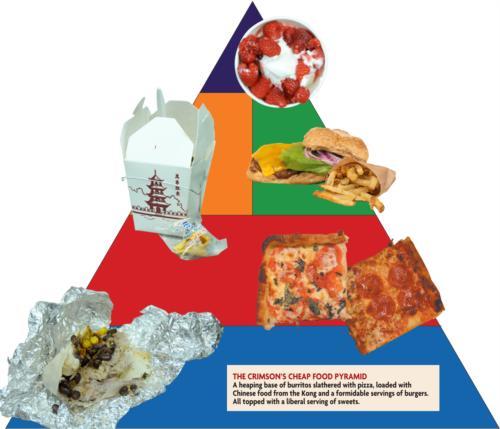 A heaping base of burritos slathered with pizza, loaded with Chinese food from the Kong and a formidable servings of burgers. All topped with a liberal serving of sweets.
By Maxwell L. Child, Crimson Staff Writer

Harvard Square is brimming with food options, particularly in comparison to most college towns. But you’ll find that unless it’s someone’s birthday or you’re going on a date, many of the restaurants will be out of your price range. Luckily, the affordable food scene is vibrant and nuanced. From speedy lunch fare to late-night grease binges, the Square has you covered.

So, what are your choices? We’ve constructed a pyramid to serve as your guide to the key food groups of the Square—burritos, pizza, burgers, ice cream, and The Kong. The pyramid is not designed to tell you what you should eat (it’s all basically unhealthy), but more of a breakdown of what you will eat.

If you’re worried about the Freshman 15, don’t despair—you don’t have to eat at any of these places. But you’ll probably get bored of the dining hall every once in a while, and the pyramid will get you up to speed quickly.

The number of burrito options in the Square has spiraled out of control in the last few years—two new national commercial outfits have entered what was already a crowded market. Sometimes you’ll feel like it’s hard to find cheap food that isn’t a burrito, so knowing your tortilla-wrapped meat and/or vegetables is essential for a prospective Square eater.

Qdoba and Chipotle are those big chains that you’ve probably heard of or sampled at some point. They’re not bad for a solid, calorific meal, and are practically mirror images in terms of store layout and ingredients (chicken, steak, rice, beans, salsa, etc.). Devotees will argue that Chipotle’s burritos taste significantly better, while others say there is little difference between the two. We come down somewhere in the middle—Chipotle’s meat seems to have a marinade that makes it slightly more flavorful, but the difference is often not enough to keep us from the several-blocks-closer Qdoba outpost.

Felipe’s is the old-line, late-night, simple-and-tasty choice. The super burrito is a mouthwatering melange of basic ingredients prepared and rolled in under five seconds by a guy who will pay only passing attention to your requests to deviate from the basic recipe. Want black beans instead of pinto? Better say it loud, early, and often—and maybe in Spanish. Aside from the Ford assembly line-esque service, Felipe’s provides a generally delicious (if perhaps unhealthy) burrito experience. Heck, maybe he does know what you want in your burrito better than you do.

Border Café is one of the most popular restaurants in the Square, and consequentially it’s adopted a hey-you-can-take-your-customer-service-and-shove-it attitude. Oh, are only four of the five people in your party here? We can’t seat you until the fifth arrives. What’s that you say about it being lunchtime on a Wednesday in the summer, and the restaurant being less than a quarter full? Next in line, please.

Aside from these quibbles, Border has an hour-long wait on most weekend nights for two key reasons: it has the twenty-something bar scene nailed down, and it serves the burro. The burro, while not technically a burrito, hits the spot like no other dish in the Square. It’s basically a burrito slathered in melted cheese and a little bit of enchilada sauce. While some complain that they can “still feel the burro the next day” and “feel like they’re sweating burro for weeks,” nothing will address hunger pangs like a burro. Nothing.

Boloco provides the healthiest burritos, with more adventurous concoctions with ingredients like hummus, teriyaki sauce, and feta cheese. Some swear by Boloco, but they tend to be those that quiver at the thought of dropping a G at dinner. And by “dropping a G,” we mean consuming at least a thousand.

A thousand calories, that is.

Which you are guaranteed to have at any of these joints, besides Boloco.

Cheap pizza in the Square is an ongoing battle between the Sicilian-style king of the hill and a number of thin-crusted foes.

Pinocchio’s, more commonly known as Noch’s, is the Goliath of the pizza scene and has been serving up thick square slices of pizza to inebriated college students for decades. Tomato basil and pepperoni are popular, classic choices, and the subs are a stealthily good option for a lunchtime meal. Until a few years ago, Nochs’ reputation was such that it held a near monopoly on speedy and inexpensive slices in the Square. Competition is always good, though, right?

The Upper Crust lives up to its name with tasty ultra-thin and massively wide slices. You’ll balk at the $3+ cost per slice, until you see one. Let’s just say four of them would probably make a very good-sized pizza.

This award-winning chain is picking up steam across the Boston area, and for good reason. The ever-rotating slice of the day provides nice variety from the standard cheese and pepperoni, and you can get full pizzas delivered in case you’re concerned you might burn off a hundredth of the calories in your meal on the walk over.

Oggi is another entrant in the thin-crust category. It’s basically the Qdoba to the Upper Crust’s Chipotle—not quite as good (but good enough), and closer. You won’t go wrong eating here, but it won’t blow anyone out of the water.

Cambridge 1 is probably the best first-date restaurant in the Square, and it serves a mean thin-crust pizza to boot. It won’t break the bank despite its gourmet, fairly healthy toppings (arugula, grilled steak, black forest ham), and it has that perfect fancy-but-not-too-fancy ambiance.

The grilled chicken and lobster are particular favorites, and you can share two half-pizzas with a lucky lady. If you landed a dinner date with that section girl, go here. Trust us.

The Hong Kong Restaurant is the only eatery to get its own layer, and with good reason. Harvard’s social scene practically mandates weekly 2 a.m. Kong visits, and you will probably go here more than most of the restaurants on this list—combined. Picking “your dish” at the Kong is an essential decision to be made early freshman year, as you will likely stick with it for years (and perhaps decades) to come.

Scallion pancakes, crab rangoon, and egg rolls are popular “smaller” dishes, but those who play to win go for one of the massive combination plates. Options include the sesame chicken, orange chicken, and chicken finger combos. You’re not really a pro until you know the number of your order at the Kong, and can recite it coherently in slurred speech. An unfriendly visit to the Kong bathroom—often brought on by the lethal “Scorpion Bowl” brew—is a Harvard rite of passage more sacred than sex in Widener or getting tooled in Expos.

Burgers, while popular with tourists and wide-eyed high-school visitors, will probably comprise less of your diet than they did at home (especially if you come from In-N-Out country).

Mr. Bartley’s Gourmet Burgers, a renowned Square institution, has an extensive and very good menu of high-quality burgers named after politicians, professors, and other notables. Make no mistake, these are tasty burgers—we like the simple “Mitt Romney” with cheese and grilled onions, but there are options to suit any fancy. The frappes, fries, and onion rings are similarly scrumptious.

So why does Bartley’s not play that big a role in the consumption of the average undergraduate? They’re just a bit too expensive ($9-$10, usually) and visits take a bit too long (45 minutes, at least). Most of the time you’ll be on the go and won’t want to drop that much money or time. Grab Bartley’s when you get the chance, though, as the burgers are iconic.

Flat Patties is a quick, cheap (less than $4), and very greasy burger. It’s generally overlooked as a food option, without reason, and should be considered strongly if you’ve got that deep cheeseburger craving.

B.Good bills itself as “real.food.fast” but only fulfills one-third of this promise. It’s certainly not fast—one can easily order, pick up a Starbucks across the street, come back, and still wait a while for the food. And it may in fact be “real” in a philosophical sense, but we take issue with the restaurant’s misuse of the word.

Assumedly, it’s referring to the dishes’ healthy ingredients, which are admittedly a good selling point. The menu used to show calorie counts for each dish, and they were impressively low for burgers (under 500 in many cases). An outgrowth of this fact, unfortunately, is that the burgers taste worse than most. You get what you pay for.

However, the most egregious offense against the word “real” is its use in the phrase “real fries,” which are “hand-cut, oven-baked...never fried!” So wait—these are not fried...and not really fried...what are we missing here?

B.Good may not be “real” or “fast,” but it is, in fact, food. So you will probably go at some point.

THE CAPSTONE—ICE CREAM AND ASSOCIATED TREATS

If you somehow feel the need to put away even more food after a big dinner, Cambridge is full of sweet delights.

Berryline, as you might guess from the name, is a Pinkberry knockoff that has cornered the market for low-cal froyo in the Square. It doesn’t quite stand up to the nuanced taste of the major chains’ product (it’s a little creamier and less tart), but it is a worthwhile replacement. The rotating flavors of the week are often a nice diversion that, along with the buy-10-get-one-free cards, keep the regulars coming back.

J.P. Licks is a popular Boston creamery that recently expanded into the Square. Its ultra-prime location on Mass Ave. across from Wigglesworth will make you lust after it every time you pass by. And with good reason—the ice cream is pretty tasty. We like the more inventive flavors like “maple buttah walnut” and “Oreo cookie dough.” The founders clearly know how to make tremendously unhealthy and intoxicatingly delicious ice cream.

Herrell’s is one of those “quirky,” old-school Cambridge spots whose demise visitors will frequently lament on their way to J.P. Licks. It’s pretty good, but probably not good enough to stave off the bulldozer of capitalist progress that is the Licks franchise. Creative destruction, we guess.

Our final ice cream vendor is known to the locals as “Ben and Jerry’s.” You may have heard of it. So yeah, it basically has all the flavors sold at your local grocery story, except a cup costs $5, and a pint costs $6. What?

Don’t go to Ben and Jerry’s—it’s a tourist trap. Go to the 7-Eleven approximately 50 feet away and pay less money for a larger quantity of the exact same ice cream. Shams like this place make us wonder whether consumers are as infallibly rational as Ec 10 doctrine likes to suggest.

—Staff writer Maxwell L. Child can be reached at mchild@fas.harvard.edu.

For more information on the ins and outs of Harvard life, visit the My First Year homepage.