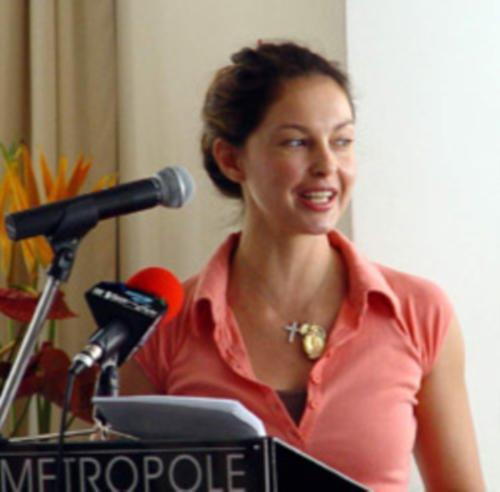 Actress Ashley Judd, seen above at the launch of a testing center for HIV/AIDS in South Africa, recently began a mid-career degree program at the Kennedy School.
By Molly M. Strauss, Crimson Staff Writer

The Kennedy School declined to comment on Judd's enrollment in the program, which launched on July 22, but spokeswoman Molly Lanzarotta noted that the degree often attracts public officials and non-profit activists.

The MC/MPA is designed to "increase the knowledge and skills of well established, high-performing professionals, who seek to enhance their public service careers or to move from the private sector to a leadership position in either the public or non-profit sectors," according to the program's Web site.

Judd, born in Los Angeles in 1968, held key roles in "Heat," "Double Jeopardy," and "The Divine Secrets of the Ya-Ya Sisterhood." She is also an active humanitarian, having served on the board of directors for healthcare nonprofit Population Services International since 2004. She was also Global Ambassador for YouthAIDS, the organization's HIV education and prevention program, and has traveled to a number of developing countries, including Thailand, Madagascar, and Rwanda.

Judd has spoken before the General Assembly of the United Nations about human trafficking, and VH1, The National Geographic Channel, and The Discovery Channel have aired documentaries highlighting her humanitarian activities.

Judd graduated from the University of Kentucky in 2007 with a degree in French after returning to the school to complete required coursework following a 17 year hiatus.

—Staff writer Molly M. Strauss can be reached at mstrauss@fas.harvard.edu.

CORRECTION: An earlier online version of this article incorrectly stated that actress Ashley Judd graduated from the University of Kentucky in 1990. In fact, though she left the school that year, Judd did not finish all the requirements for a French degree until 2007. The article has been updated to reflect this correction.