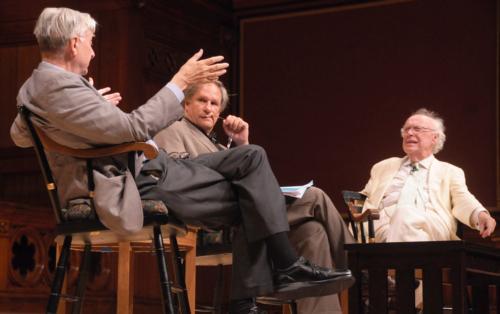 The two modern-day scientific luminaries discussed their storied careers—including a once-intense professional rivalry—and reflected on the future of the biological sciences.

Watson, best known for his groundbreaking discovery of the structure of DNA, began his career as a student of zoology, but later switched to the budding field of genetic biology in the early 1950s, after finding ecology “not very intellectually demanding.”

Meanwhile, Wilson joined the Harvard faculty a year before Watson in 1955 in the Biology Department, and has since continued as a pioneer in the discipline, discovering scores of insect species over the course of his 60-year career.

The two famously butted heads during their concurrent 20-year tenures on the Harvard Faculty between 1956 and 1976.

Event moderator and NPR journalist Robert Krulwich did not shy away from the long-time rivalry between the two luminaries.

Watson and Wilson had once exemplified the two polarized factions of the biological sciences. Watson focused much of his career on the molecular basis of life and Wilson studied the evolution and social behavior of ‘critters.’

The rivalry has lessened of late, both agreed, due in large part to the recent convergence of the two fields.

“Molecular biology had a ‘bacterial’ explosion...and it produced a bunch of methods and ideas that [ecologists] started grabbing hold of,” Wilson said. “Meanwhile, MCB is starting to go evolutionary.”

Though now reformed rivals, Watson and Wilson did attest to the critical role of ambition and competition in making scientific advances. “You have to have an enemy,” Watson said.

Wilson admitted that he enjoys the thrill of the attack. During a controversial lecture on the biological basis for human nature in 1978 an audience member emptied a pitcher of water on Wilson’s head.

“I was the only scientist in modern times to be physically attacked for an idea.” Wilson said. “Take that Jim,” he added.

As the discussion closed, Wilson addressed the complex challenges of the coming century, such as climate change and the loss of biodiversity.

“We have Paleolithic emotions, Middle Age institutions, and god-like technologies and we will be facing a point of crisis in the coming decades,” Wilson said. “We have to answer huge questions of philosophy that philosophers abandoned decades ago—of who we are and where we come from rationally...or we are running a dangerous course.”

—Staff writer Natasha Whitney can be reached at nwhitney@fas.harvard.edu.