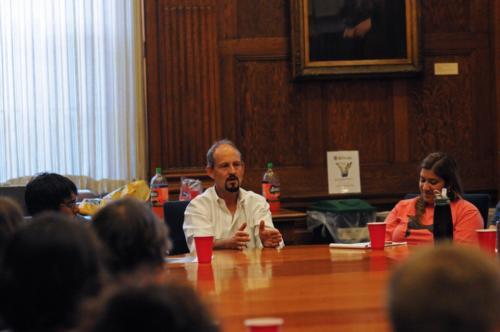 Psychology Professor Mark Hauser discusses the effect of nature on morality in the Barker Center yesterday. The talk is the first in the Society for Mind, Brain, and Behavior’s informal seminar series.
By Nadia L. Farjood, Contributing Writer

“In the same way every child is born with the capacity to learn language, we are born to universal moral grammar, the toolkit for moral systems,” Hauser said.

Hauser, the author of “Moral Minds: How Nature Designed Our Universal Sense of Right and Wrong,” stimulated conversation at the Barker Center event about the discrepancies between conventional and moral transgressions. He asked hypothetical questions that kindled debate among the approximately 25 students in attendance about potential driving forces for human behavior, ranging from genetics to the environment.

Hauser then shared his latest research on neurogenetic problems—he is currently studying a population of psychopaths, whom he characterized as lacking social emotion.

One audience member, Spencer B.L. Lenfield ’12, said he was most interested in Hauser’s discussion of the awareness of morality compared to empathy.

“Even beyond his interpretation of ethical questions, I am inspired to think about the moral ideas presented for a long time to come,” Lenfield said.

Jackson M. Kernion ’12, co-chair of the Harvard Society for Mind, Brain, and Behavior (HSMBB), which organized the event, said he is particularly curious about Hauser’s research

with wild monkeys. The professor’s findings have suggested that humans are not alone in their morality because it is an intrinsic quality.

“What Noam Chomsky and Steven Pinker did for language, [Hauser] is doing for neuroscience,” Kernion said.

HSMBB developed as an offshoot of the University’s interfaculty initiative in Mind, Brain and Behavior. The group revamped its mission this year and seeks to provide an opportunity for students to supplement coursework with learning in a more intimate capacity, while also gaining exposure to the breadth of research available on campus.

“So much of the learning here takes place outside the classroom in conversations. We seek to facilitate that,” said HSMBB Co-Chair Sophie R. Wharton ’11. “We also embrace the interdisciplinary idea, and we hope the seminars will give people a taste of something new or spark an interest.”

HSMBB plans to host one seminar per week and feature speakers from all MBB disciplines including Neurobiology, Psychology, Philosophy, Human Evolutionary Biology, Computer Science, Linguistics, and History of Science.