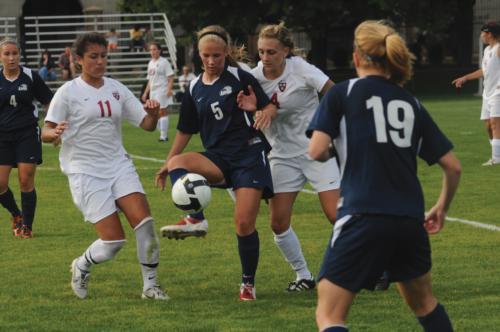 Sophomore defender Lindsey Kowal and Harvard women’s soccer are looking to right the ship after a difficult start to the season. The Crimson’s run to the NCAA tournament last year indicates that the squad has the talent to succeed and will look for a turn By Karen L. Ding
By Dennis J. Zheng, Crimson Staff Writer

Let’s make this clear—the ship is not sinking. But it’s also definitely not yet seaworthy, and that is not a good sign for Harvard women’s soccer.
While some teams would be satisfied just to stay afloat, the Crimson was expected to be exactly the opposite. A 2008 season that resulted in a share of the coveted Ivy title wasn’t nearly enough for a hungry Harvard squad. There was more work to be done.
That assessment rings truer after this year’s start, which has been, in a word, underwhelming.
A season-opening, double-overtime tie with San Diego State was, if nothing else, a solid defensive performance. And even the harshest of critics would be hard-pressed to begrudge the next day’s loss at Connecticut, which received 15 first-place votes in the latest NCAA rankings. But it was obvious to fans and coaches alike that the Crimson was still very much in preseason form.
A 1-0 win against struggling New Hampshire the following week provided a boost, though Harvard again had difficulties capitalizing on multiple scoring chances.
This past weekend’s pair of matches represented a way for a 1-1-1 team to point itself in the right direction. Alas, the Crimson was shut out last Friday by Long Beach State, having its 10-game home unbeaten streak snapped in the process. Sunday’s 3-2 loss to Hofstra concluded the weekend.
It bears repeating that this sort of opening performance is not necessarily cause for panic.
First of all, Harvard’s caliber of schedule is no joke. Hofstra was coming off a near-upset of No. 25 Indiana and beat Princeton earlier in the year. As for Long Beach State, the 49ers had dominated No. 21 Missouri, 4-1, before heading to Cambridge.
Just as importantly, last year’s team also took some time to get going, and look where they ended up—the NCAA Tournament. To take the comparison even further, that group’s first entry into the win column also came at the expense of New Hampshire in the third game of the season.
Perplexing, however, are the Crimson’s struggles when considering its track record and personnel.
The desire to win ought to be there. Coming within two successful penalty kicks of advancing to the second round of college soccer’s biggest stage is healthy motivation, to say the least.
The players are there too. Yes, Harvard lost key graduating seniors in the midfield and on the backline, but a debilitating loss it was not. As the class of 2009 exited the stage, the situation appeared to be more of an opportunity than a crisis. Last year’s group of juniors took on an increasingly larger role as the season went on, and the adjustment for the Crimson, which consistently relies on underclassmen, was not anticipated to be a major obstacle.
Perhaps what is missing isn’t talent, but something more abstract. Senior leadership and team camaraderie are things that take time to develop, no matter how high expectations are. And with 11 players on the field, any lineup change requires an adjustment period, particularly when 10 freshmen are added to a squad.
This transition has undoubtedly been hampered by the absence, albeit temporary, of another key figure from last year. Senior Christina Hagner—coming off a breakout season in which she started all 18 games—has not yet seen the field due to a minor case of patellar tendinitis. Losing its leading goal scorer from last year will hurt any team, especially one whose strength is on the defensive end.
So what does the future hold for Harvard? There are hints of good and bad. A 3-0 deficit against Hofstra was made respectable with two Crimson goals in the final 10 minutes.
The offensive outburst must continue if Harvard is to have any hope this weekend, when it plays Friday night at No. 6 Boston College and Sunday at Boston University. Say what you will about determination and resilience, but riding a four-game losing streak into the Ivy season opener would be less than ideal.
On the other hand, last year’s squad did manage to battle the Eagles—ranked 12th in the nation at the time—to a 1-1 draw. The tie extended what would eventually be a six-game unbeaten streak for Harvard, which would later string together six-straight league wins on its way to the Ancient Eight crown.
If the Crimson wishes for history to repeat itself, it had better start soon.
—Staff writer Dennis J. Zheng can be reached at dzheng12@college.harvard.edu.