Happiness Is More Than GDP 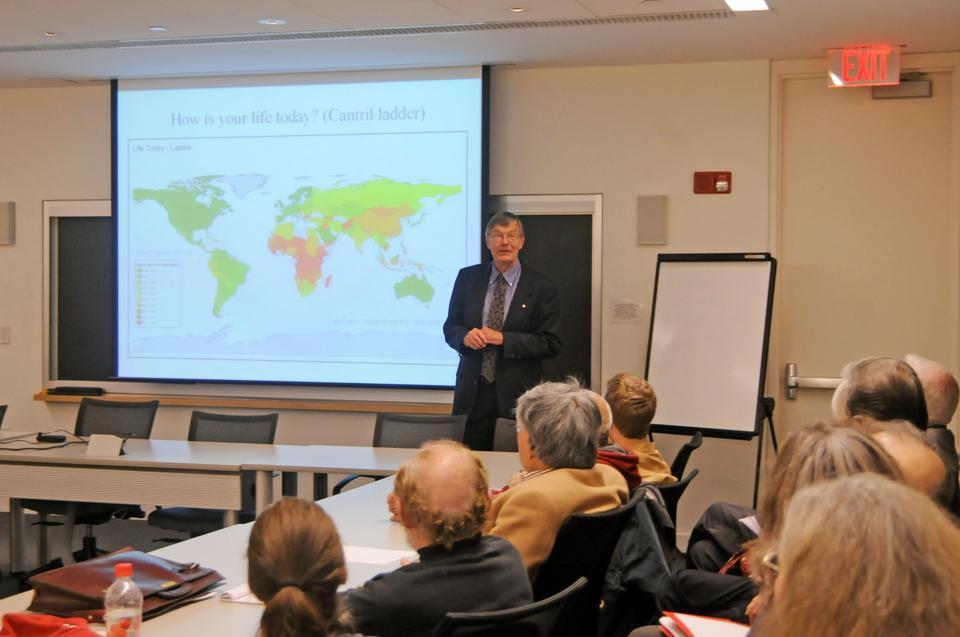 John Helliwell, professor of economics at the University of British Columbia, discusses the different measures of happiness.
By Nathalie R. Miraval, Contributing Writer

A familiar tune engaged audience members at the beginning of a seminar on happiness yesterday afternoon.

“If you’re happy and you know it, clap your hands,” sang John F. Helliwell, economics professor at the University of British Columbia.

Held at the Weatherhead Center for International Affairs and the first in a series of Canada Program Seminars, “What Produces Happy Lives?” focused on the means of measuring a country’s success other than the GDP.

According to Helliwell, the purpose of his lecture was to argue that subjective well-being and self-assessments are “authentic measures that deserve to be taken very seriously by anyone trying to see how well a community or society works and how it might work better.”

Helliwell said that higher income does not necessarily correlate with happiness. He used graphs and charts to compare and contrast the happiness levels in the United States and in Canada, and in different regions of Canada.

Helliwell’s data, collected from surveys, demonstrated that various aspects of life besides income influence happiness, including trust in neighbors, sense of belonging to a community, number of friends, and experience of freedom and governmental corruption.

Although U.S. residents have higher incomes, Canadian residents are happier overall, he concluded.

“We’re putting the economic way of life into a social context,” Helliwell said.

In response to questions from audience members, Helliwell discussed multiculturalism and its effects on a country’s overall happiness.

He said findings show that immigrants who keep close to their roots while also integrating into a broader community are happiest.

Their happiness, he explained, is due to their sense of belonging—and not their income.

“I give these talks to encourage people to demand to their governments that they should take this data seriously,” Helliwell said.

Polina Krass ’11, prime minister of the Canadian Club and an attendee of the seminar, said that the discussion “put a very good perspective on a lot of issues we don’t normally talk about.”

Alison K. Hill, a student in the Graduate School of Arts and Sciences, agreed: “I really enjoyed it. I think this whole idea of focusing on satisfaction other than economic things is a new development,” she said.