Across the country, 13 Harvard alumni and one former professor are campaigning for gubernatorial posts 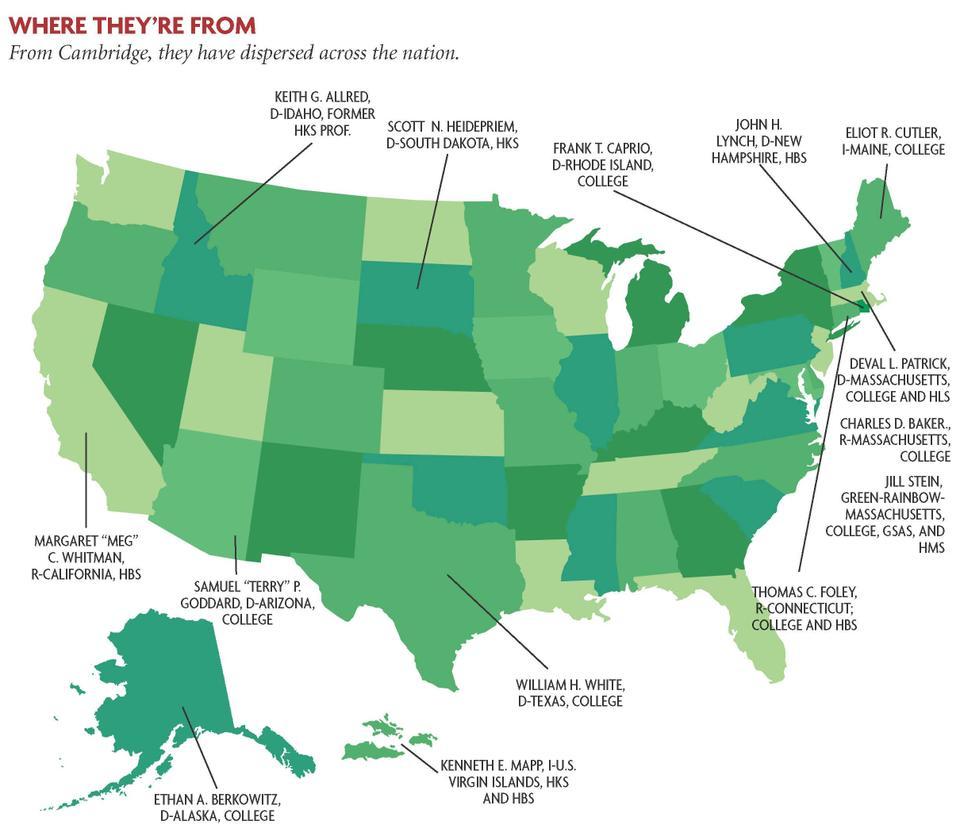 In 11 U.S. states and one territory, 13 Harvard alumni and one former professor are aiming for the highest political position—the prestigious post of governor.

From coast to coast and beyond—one is trying to nab the top spot in Alaska and another in the U.S. Virgin Islands—these alumni are striving to bring to their states the lessons they learned in Cambridge.

Among these candidates, two are sitting governors seeking reelection, and six are challenging the incumbent chief executives of their states. Three are Republicans, eight are Democrats, one is a member of the Green-Rainbow party, and two are Independents. Twelve are men and two are women.

Nine attended Harvard as undergraduates; two studied at the Kennedy School of Government and one taught there. Four hail from Harvard Business School and one from the Graduate School of Arts and Sciences; one holds a degree from the Law School and another from the Medical School.

These fourteen candidates have their educational background in common, but beyond that, their opinions and experiences vary widely.

Campaigning in states with vastly different populations, locations, and climates—both political and meteorological—they are focused on a wide variety of issues.

Running for governor of the U.S. Virgin Islands, Kennedy School and Business School graduate Kenneth E. Mapp says that “crime—violent crime in particular” is the most important issue in his campaign.

Mapp, an Independent running against the incumbent Democratic governor in a race with no Republican candidate, continues, “Our homicide rate is more than four times the national average. People in the Virgin Islands are getting killed four times faster than anywhere in America.”

“South Dakota’s college students have the greatest percentage of debt of any state in the union,” Heidepriem asserts. “I think it’s because...we just really have not done a good job supporting education in South Dakota.”

Stating that the share of the state budget devoted to education has been slashed eight percent in the past year, he says, “I’m committed to reversing that trend.”

Over 2,000 miles away, Ethan A. Berkowitz ’83 is talking about issues that are particular to Alaska, where he is running on the Democratic ticket. “We’re a resource development state,” Berkowitz says. “We need to ensure that we continue to produce oil and begin to produce gas.”

For Samuel “Terry” P. Goddard ’69, who hopes to be the next Democratic governor of Arizona, immigration “undoubtedly is what has polarized this election more than anything else.”

Though each state presents its own challenges to its would-be political leaders, there are some problems that are troublesome nationwide. All of the candidates interviewed for this story mentioned their states’ economies and budget deficits among their foremost concerns.

“By far the most important issue is our economy and the fact that it’s in such bad shape,” says Goddard. “After years of spectacular success, we’re on the rocks. We have the largest job loss in the country on a per capita basis, and that’s a real reversal of fortune for the state of Arizona.”

In Connecticut, Republican candidate Thomas C. Foley ’75 says, “To create jobs in Connecticut, it will require the government to get the budget under control, because no employers are going to come here. Too many people don’t see the opportunities here that they used to...we need to change the policies that have run businesses out of the state.”

Focusing on families as well as businesses, Foley, whose son is currently a sophomore at the College, added, “We simply tax people too much in Connecticut.... Families are struggling all over Connecticut, and state government isn’t reducing spending.”

Many of the candidates reflect on elements of their Harvard backgrounds that influence their political involvement to this day.

Mapp says choosing to spend two years studying government and business at Harvard was “the singular most important decision I made that is benefiting my community.”

He adds that his education among classmates from a variety of countries “allowed me to put the problems confronting the people of the Virgin Islands in great perspective and realize [that] with some of the petty politics in our community, we were squandering great opportunities.”

Heidepriem also praises the political education he received at the Kennedy School. “I would say that the Kennedy School was an important laboratory of ideas for me. It was helpful in allowing me to think about policy questions and in crystallizing my own point of view,” he says. “I wouldn’t say that my opinions changed at all, but the way in which I approached public policy questions moved from an emotional basis to an empirical, rational structure.”

Berkowitz recalls discussing politics with his roommates in Quincy House. “Unfortunately for them, they are now some of my biggest contributors,” he jests, adding that his former roommates now send donations to his campaign, even though none of them live in Alaska,

Berkowitz’s undergraduate years also helped lead him to Alaska, the state where he has lived for the past 20 years and that he hopes to helm as governor. Raised in California, he wrote his thesis on “the political economy of Antarctica” and became enamored by the “high latitude attitude” that he found there while performing his thesis research.

“When you live in a place where you can rise or fall based on your own personal ability, that’s very attractive,” he says. “When you have fewer people, there are more opportunities for that.”

“We’re seeing a trend of people going into elected office who are not career politicians and have qualifications other than just having succeeded in getting elected to office,” Foley observed. “I think that’s a very good trend for the country.”

“I think the culture at Harvard is invested in service and a sense of giving back,” he adds. “A lot of my peers were interested in going into politics, and I think that certainly contributed to my heading down this path.”

BEYOND THE IVY GATES

Despite these fond memories of their education, most candidates shy away from mentioning their schooling on the campaign trail.

Goddard, who attended Harvard College before returning to his home state to earn a law degree at Arizona State University, says, “Here in Arizona, it would be a bigger local political advantage to go to one of the local universities.”

“I don’t wear it on my sleeve,” says Heidepriem, and Foley agrees, “I don’t mention it. People don’t want to hear about it from the candidate.”

However, Foley adds, “When they hear from other people that the candidate is a graduate of Harvard, I think it leaves a positive impression.”

Now that their school days are behind them, the candidates say that they have learned that politics is not always what it seems in an academic environment.

“I wish politics really worked the way it’s supposed to, the way we were taught at Harvard,” Berkowitz says. “It’s not as clean; it’s not as pure; and you get policy decisions that aren’t necessarily based on logical outcomes but more on expedience or self-interest. I think you need to remain an idealist and stay true to your principles and lead by example.”

“You need to watch for candidates who offer avenues to success,” he advises, “who want to talk about the issues in substantive ways. This isn’t a time for old-fashioned bland political rhetoric.”

An earlier version of the Oct. 29 news article "Alumni for Governor" inaccurately reported that 12 Harvard alumni were campaigning for gubernatorial positions. In fact, a thirteenth alum—Eliot R. Cutler '68—ran as an Independent candidate in Maine.