Men's Hockey Starting off on the Right Skate 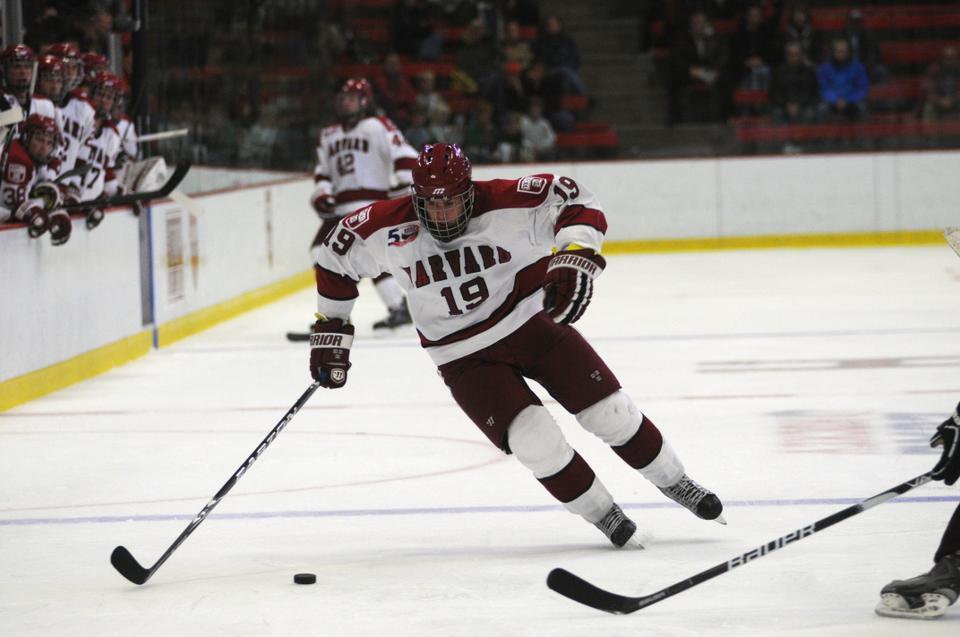 Junior Alex Killorn scored with 8.2 seconds left against No. 18 RPI, sending the Crimson to a 1-0 upset victory in a strong opening weekend.
By Robert S Samuels, Crimson Staff Writer

Despite firing 42 shots, Harvard and Rensselaer combined for only one goal in 60 minutes of play on Saturday night.

It just happens that the lone score came with 8.2 seconds left in the contest.

“It’s nice to start the season with a win against a team of that caliber,” Killorn said. “We’re pretty excited about that.”

The 83rd all-time matchup between the teams began uneventfully. The Crimson failed to capitalize on two power plays in the first seven minutes, and the Engineers followed suit, wasting two power plays of their own. Though neither team scored in the opening period, Rensselaer held the offensive advantage, tallying 16 attempted shots while Harvard managed only 10. The Crimson led in shots on goal though, 6-5.

The Engineers’ offense continued to threaten the Harvard back line in the second period. Twice, Rensselaer put the puck in the back of the net only to have the score called back: the first time, a high-sticking call invalidated the goal, and in the second instance the referees had blown the whistle and stopped play before the shot.

There were other close calls too. The Crimson survived two Engineer power plays in the period. As time wound down, Nick Bailen, a Rensselaer defender, nearly put the visitors on top after he fired a shot that clanged off of the post.

“I was pretty fortunate with those posts,” said assistant captain and Harvard goaltender Kyle Richter. “You love to hear that sound and look behind you and not see the puck in the net.”

Though the Crimson had the same number of shots as the Engineers during the middle frame, Harvard failed to supply the same level of pressure as Rensselaer’s offense. For the most part, the Crimson had a tough time keeping possession of the puck long enough while on the attack to string together multiple shots.

“That’s something we’re really going to have to concentrate on: how to manufacture some offense and get some more people around the net so we can get the so-called ‘dirty goals,’” said Harvard coach Ted Donato ’91. “You need those types of goals to be able to have a successful season.”

Many of the Crimson’s offensive struggles seemed to vanish with the opening of the third period. Harvard tallied six of the first seven shots in the frame and 11 overall, tying the team’s number of shots in the first two periods combined.

The Crimson executed its fifth successful penalty kill of the night 18:23 into the period, and only 16 seconds later, Harvard got a power play of its own. Unlike the visitors, the Crimson capitalized on the opportunity.

In less than a minute, Harvard fired five shots on the Engineer goal. It was the fifth one that proved to be game-changing.

With the clock winding down, sophomore forward Conor Morrison passed to senior Michael Biega, who threaded the puck past a Rensselaer defender to Killorn. Flanked by sophomore Danny Biega, the Crimson held a two-on-one advantage. Faced with the decision to keep it himself or pass to the younger Biega, Killorn chose the former option. Skating towards the right side of the goal, the forward slapped a shot that just snuck under the Engineer goaltender Allen York’s arm.

“I was looking at Danny to make the goalie think I was going to pass it and at the last second just [tried] to get off a shot as quick as possible,” Killorn said. “It ended up working out pretty well.”

Rensselaer failed to pull off a miracle in the 8.2 seconds after Killorn’s score, giving the Crimson a 1-0 victory. In the process, Harvard ended the Engineers’ seven-game unbeaten streak, which had been tied with Boston University’s for the longest streak in the nation.

Overall, the team was pleased with the performance.

“I think they really battled,” Donato said. “They blocked some shots, and ultimately, when [Rensselaer was] able to get through, [Richter] was there.”

“It was a great feeling in the locker room to know the season’s on and we can win games like that,” he added.

Richter, who totaled 19 saves in the contest, echoed Donato’s sentiments.

“The guys did a great job battling the storm for the majority of the game and really stayed patient,” the goalie said. “[We] didn’t let them dictate the play and let them control our emotions. We played our game, which I thought was a great step in the right direction.”