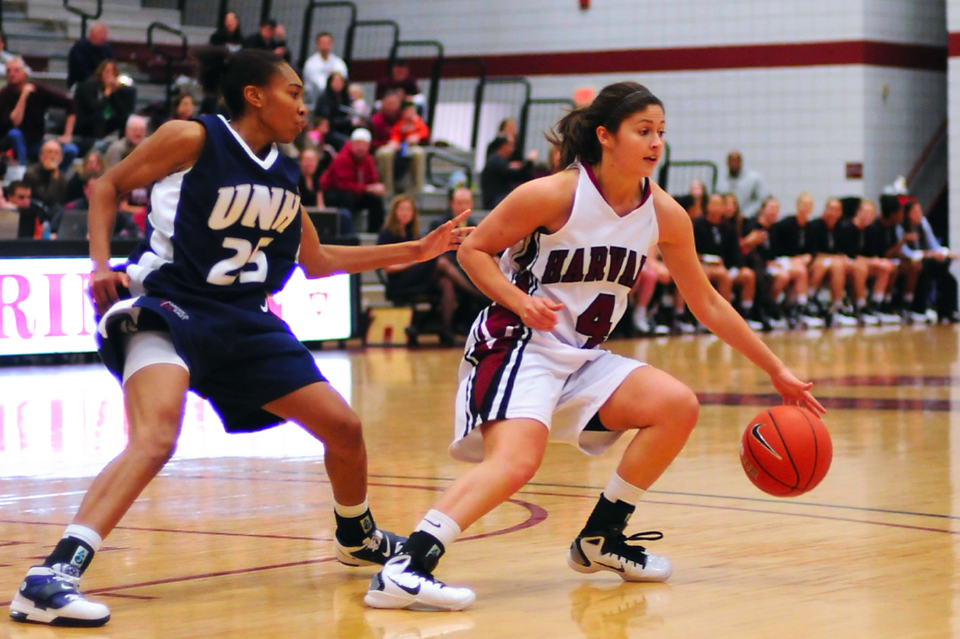 Reconvening after a brief winter break, the Harvard women’s basketball team had just one day to prepare for its matchup last night against Dayton.

“We had one practice [Wednesday] night at nine o’clock,” said Crimson coach Kathy Delaney-Smith. “We tried to squeeze our game plan all into one practice.”

Not surprisingly, the host Flyers (8-5), armed with their high-powered offense, cruised to a 100-81 victory over Harvard (5-5) last night in Dayton, Oh. The hot-shooting Dayton squad finished with a 52.1 field-goal percentage, topping 100 points for the third time this season. Meanwhile, the Crimson shot a respectable 44.3 percent from the field, with three players—senior forward Emma Markley, junior guard Brogan Berry, and sophomore forward Victoria Lippert—in double figures.

“I wasn’t displeased with our kids’ efforts,” Delaney-Smith said. “But bottom line, [Dayton] was a better team.”

For Berry, who played her high school ball at nearby Carroll High, the game was a homecoming of sorts.

The Flyers’ offense found its rhythm right from the start as Dayton’s Kristin Daugherty scored seven of the first 12 points. Two quick Harvard turnovers and a 13-2 Dayton lead four minutes into the game forced Delaney-Smith to call a 30-second timeout.

“We were down 12 points immediately, and that hurt us,” Delaney-Smith said. “They’re a veteran team; what they do well offensively is read the defense. They run the floor very well. Their point guard [junior Patrice Lalor] is lightning quick and pushes the ball.”

Markley, who scored 19 points and grabbed four boards, converted on a three-point play with 15:30 left to close the lead to 15-7. Strong drives by Lippert and three consecutive post-ups by Markley put the Crimson to within nine points, trailing 39-30 with the first half of play winding down.

But every time Harvard appeared poised to make a comeback, Dayton found a way to extend its lead. The Flyers relied on a 13-6 run to go into the locker room with a comfortable 53-36 lead.

“We made some runs at them,” Delaney-Smith said. “There were times when we played some very tough defenses, yet they were still able to score.”

“They really pushed the ball well and got a lot of easy baskets and transition points,” Berry said. “That set us back at the beginning of the game.”

With a quick 8-2 Flyer run ignited by Daugherty’s back-to-back three pointers, the second half started just as the first began. Not surprisingly, the Crimson made another attempt at a comeback, employing different defensive schemes in the hopes of halting Dayton’s offensive attack.

“We used a lot of combination defenses and we’ll go four and five minutes where we’re doing a good job, and then they’ll just shove it down our throats and get an easy look,” Delaney-Smith said. “They’re a very well-coached and disciplined offensive team.”

With six minutes elapsed in the second half, Lippert and co-captain Christine Matera drilled three-pointers to cut the lead to 66-45.

Despite the sharpshooting, turnovers continued to plague Harvard the entire night, preventing the team from catching up with its opponent. The Crimson turned the ball over 23 times in total, giving Dayton 31 points off of its mistakes.

“We still were plagued by turnovers,” Delaney-Smith said. “In the games that we lost, that was always on the list of what went wrong. It’s not any one player, it’s each player has two or three and that’s too many. And it wasn’t their defense…there were shots that we were able to get. The turnovers were us beating ourselves.”

With the final game of the calendar year wrapped up, Delaney-Smith hopes the team will use the loss as a valuable learning opportunity to improve.

“We’re not where we expected to be, but we’re not in a bad place either,” Delaney-Smith said. “I think we can keep getting better; I saw a team that still believes that. We’ll put it behind us and move on. We have to go home and get ready for UMass.”