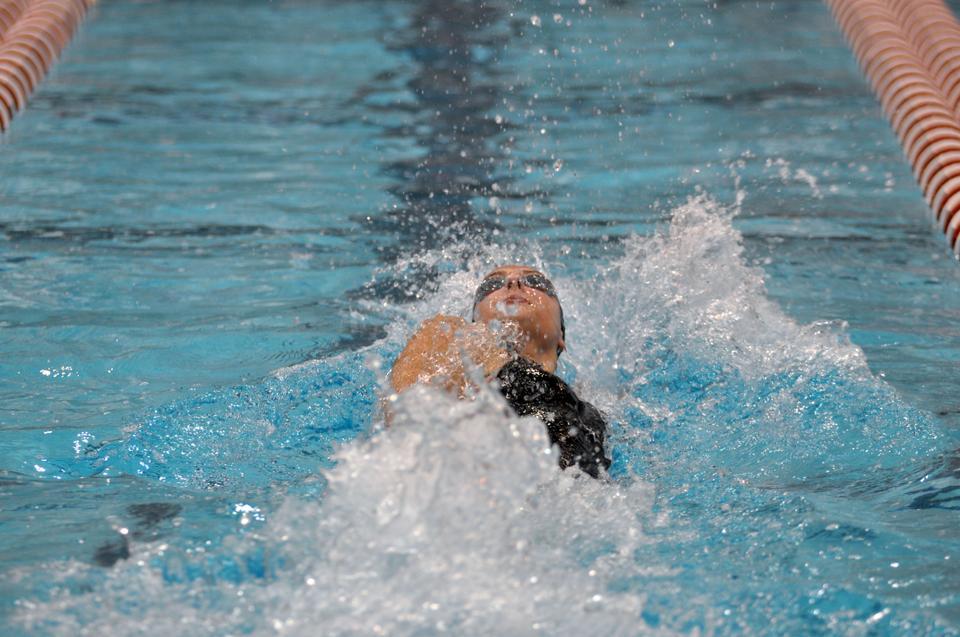 Junior Meghan Leddy came in 18th place overall in the 100 backstroke but set a new school mark in the process. Leddy recorded 55:18 in the race, beating the old mark by .05 seconds. This was just one of three Harvard records broken in the span of two days at the Georgia Invitational.
By Aparajita Tripathi, Crimson Staff Writer

As the Harvard rank and file was donning its formal wear this past weekend, the women’s swimming and diving team packed its water gear and headed south to the Georgia Invitational in Athens. After three consecutive road wins against Ivy League competition, the Crimson prepared to face its toughest challenge yet—a competition roster featuring four nationally-ranked teams, including the second-ranked Georgia Lady Bulldogs.

But Harvard applied the same mantra that has been at the core of its success throughout the season and responded to the invitational’s high caliber with some of its own. At the end of three days of events, the Crimson swam away with four new school records and a sixth-place finish in the meet with 261 points overall. Meanwhile, the Georgia host team clinched the title with 1,115 points.

“Coming down to Georgia and facing teams like UGA and UVA, we knew the competition was going to be pretty stiff,” co-captain Ali Slack said. “This weekend’s performances were something to get us going. We had some amazing swims, and that’s something we can take back with us to Boston.”

Slack had reason to celebrate as she combined with senior Katy Hinkle and freshmen Sarah Li and Jenna Gregoire to break the school record in the 200-yard freestyle relay with a time of 1.32.49. Hinkle further added momentum to the meet’s first day with an individual record-breaking performance in the 50-yard freestyle, touching in at 22.87 seconds in the preliminary round. With this performance, Hinkle clinched a spot in the final A category, where she ultimately finished in fifth place with an NCAA B cut. The Crimson closed out Friday’s events in sixth place with 99 points.

On the second day of competition, junior Meghan Leddy sustained the tide of Harvard’s success, shaving .05 seconds off the previous school record in the 100-yard backstroke in a 55.18 finish and adding a record-breaking effort in the 200-yard backstroke.

“Watching Katy’s and Meghan’s performances, it was hard not to get caught up in the excitement and jump in the pool to perform well yourself,” co-captain Christine Kaufmann said.

Next up, the quartet of Hinkle, Gregoire, Li, and junior Margaret Fish earned ninth place in the 200-yard medley relay in 1:44.12. The 800-yard freestyle relay combination of Li, seniors Katherine Pickard and Kate Mills, and junior Catherine Zagroba chimed in with a 10th-place finish to close out the day’s events.

The Crimson entered the final round of the invitational on Sunday still in sixth place, sitting ahead of the University of Minnesota. Kaufmann’s 13th-place finish in the 1,650 freestyle in a time of 16:53.71 added 15 points to Harvard’s tally. Freshman Paige Newell and Zagroba came in behind Kaufmann in the same race in 17th and 18th place, respectively. Mills and Leddy gave the Crimson its best performances of the day: Mills completed the 200-yard butterfly in 1:59.40, good for fifth place, and Leddy contributed 15 points with a fourth-place finish in the 200-yard backstroke in a time of 1:55.60.

“I think the most important thing at this point [of the season] is to show that we can swim in all conditions,” Kaufmann said. “We did it in our league. And now, racing well against some of the top competition in the country shows off just how hard we’ve been training.”

The Georgia Invitational was also notable for its strong contributions from the freshman class, as both Gregoire and Li contributed to school-record shattering races in their first collegiate appearances on the national stage.

“It’s always great to see the freshmen swim well,” Pickard said. “They’ve really brought a new mindset to this team. Their success is exciting for us, and we’re definitely going to need them by the end of the season.”

At the midway point of its schedule, Harvard has already amassed an impressive record against Ivy and non-Ivy competition. In addition to the Georgia meet, the Crimson deployed two separate contingents this past weekend to the MIT Invitational, where Harvard secured second place with 772 points behind MIT’s 1,045, and the Texas Invitational, which witnessed strong performances from the Crimson diving squad. Freshman Schuyler Moore led the way with a 16th-place finish in the three-meter dive during the preliminary round with a score of 254.40.

“We’re going to use these good performances to go into training,” Pickard said. “The next two months are the hardest of our training schedule. We’ll use the positive feedback, and hopefully more records will be broken with the championship meets in February.”

—Staff writer Aparajita Tripathi can be reached at atripathi@college.harvard.edu.