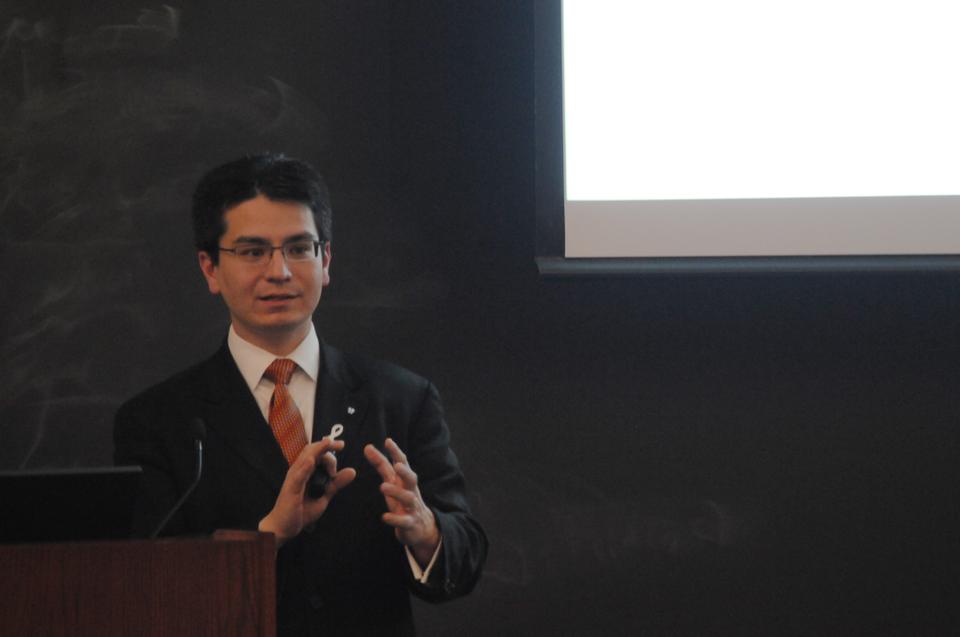 Those passing by the Science Center yesterday caught sight of a large, white sign emblazoned with blue letters, “Support White Ribbon Against Pornography.”

This week, True Love Revolution, Harvard Knights of Columbus, and the Harvard-Radcliffe Catholic Students Association have come together to celebrate White Ribbon Against Pornography Week with a series of talks including last night’s featuring the case of pornography.

“We want to raise awareness about the harmful effects of pornography and speak out against it,” said Leo J. Keliher ’10, co-President of TLR. “It’s a good time right after Valentine’s Day, because pornography really does tear at relationships, especially on college campuses.”

Without skipping a beat, Franks spent the next hour explaining that no, pornography is not a right.

“Anybody who loves this nation has got to look at that and say, ‘Oh God—it’s not Thailand, it’s not Russia, it’s the United States!’” Franks said, pointing to child pornography and violence and degradation of women featured in what he called “hardcore pornography.” “This is bad. It’s criminal. It’s evil!”

A self-proclaimed leftist who declined to give his name to The Crimson raised the question of regulating the pornography industry.

“There is a developing sex doll brothel industry in China where people can act out violent scenarios on dolls manufactured to look like women or children. How do you regulate that?”

Though Franks said he had not heard of the industry, he said that a society that allows such industries to thrive would only “increase the impulse” for “more deviant material.”

An audience member who asked to remain anonymous because he did not want to be affiliated with TLR said that Franks was avoiding debate by using vague theories to justify his point.

Christina M. Giordano ’10, TLR treasurer, said that she hopes the event opened a dialogue about the topic of pornography.

Keliher was found continuing the debate with the anonymous leftist after the talk ended. When asked whether he felt the event was a success, he replied, “I‘m glad that it stimulated a lot of discussion.”

—Staff writer Alice E.M. Underwood can be reached at aeunderw@fas.harvard.edu.