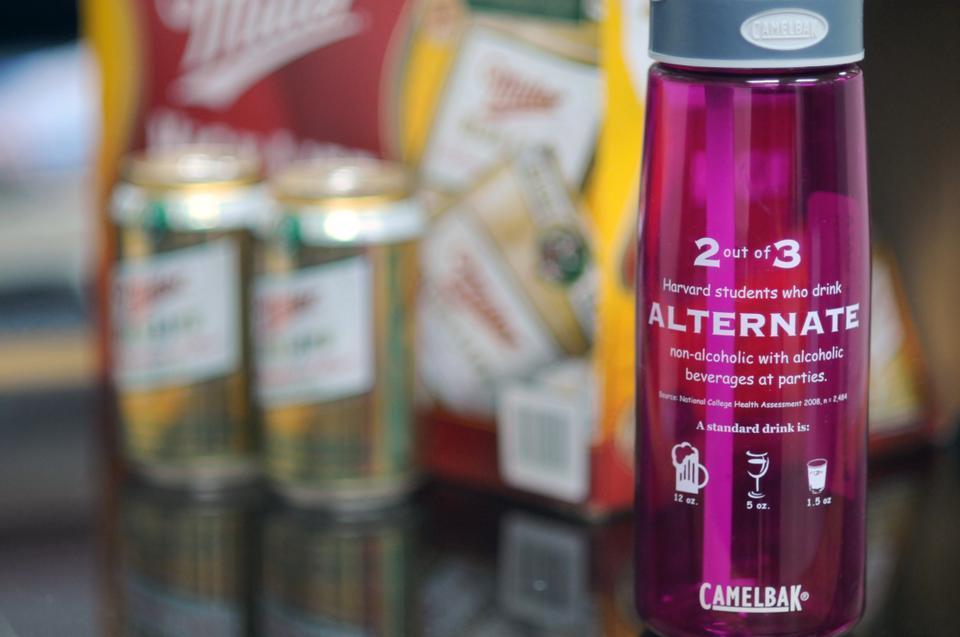 Brought to You by DAPA

The only thing a Harvard student might find more tantalizing than a big fat “A” on a final paper is ...
By MARIETTA M COBURN

The only thing a Harvard student might find more tantalizing than a big fat “A” on a final paper is the prospect of a free slider after a long night of final club hopping.  The Office of Alcohol and Other Drug Service’s Drug and Alcohol Peer Advisors (DAPAs), whose late night deals with b.good are just one of their methods of promoting safe and responsible drinking, seems to know Harvard’s penchant for penny pinching quite well.  Though some may think DAPA is no more than the white lettering on that free Nalgene they managed to snag as yet another irresistible giveaway, those who look beyond the loot discover a group of students armed with an important albeit somewhat surprising message.

Since its inception in January 2006, DAPA has spearheaded a mission slightly different than most typical drug and alcohol awareness education programs.  In line with Harvard’s amnesty policy, the student peer-advising group recognizes that students will drink at college and seeks to encourage safety above all else.

FROM THE DELPHIC TO THE DEBATE TEAM

Each fall, DAPA immediately exposes itself to freshmen during their mandatory workshop where the organization instructs students in everything from Harvard’s alcohol policies to the potential perils of final club partying while also demonstrating how few students can accurately pour an appropriately sized shot of alcohol into a Solo cup straight from the bottle. However, the DAPAs make sure to emphasize that they are open and approachable resources who can offer guidance without being judgmental.

“When selecting DAPAs, we look for people from a variety of different perspectives, different fraternities and sororities, social clubs, final clubs, sports teams, basically a diversity of perspective,” says Zachary D. Gober ’11, chair of the group’s Grants Committee. “DAPA is by no means an abstinence-only group.”

DAPA defies the notion that they are composed of only anti-alcohol students.

PIZZA WITH YOUR POPOV

DAPA’s duties are comprised of teaching students about the effects of binge drinking on the body, how to drink responsibly, and what to do if a friend has already reached a dangerous level of intoxication. More generally, DAPA sees itself as uniquely positioned to reach out to students in a way that adults and administrators cannot.

“Our purpose is to basically make sure that drugs and alcohol are treated in a mature manner,” says President of DAPA Cullen D. McAlpine ’11. “You don’t need to go out and knock back 10 shots to have a good night, so we hope students will for the most part pick up on that and lead a healthier lifestyle. We know that drinking is not going away so we want to make sure people are as safe as possible.”

DAPA is comprised of 30 student peer advisors who all graduated from an intense training program of 11 sessions. Besides being peer educators, DAPAs can also dish out the dollars for safe partying.  However, their range of funding is not just limited to your typical Wednesday night Monopoly marathon. In fact, DAPA will provide grants to alcoholic and non-alcoholic parties alike, though it will not finance the purrchase of any  alcohol.  Their purpose is two-fold. On the one hand DAPA wants to ensure that ragers don’t go awry because of a lack of food to offset the effects of heavy drinking. At the same time, they want to guarantee that students who don’t wish to rip shots all night have fun and creative alternatives to alcohol.

“With our grant from DAPA, we used the money to buy flavored blood orange sodas,” says Amelia G. Mango ’10 who has been awarded grants on behalf of the Center for European Studies’ annual Garden Party and Ball. “I think DAPA fills a sort of unique need.”

In its early stages, DAPA was perceived in a negative light because students were unaware of their full intent and purpose, merely seeing them as staunch enforcers who frowned upon all facets of collegiate fun.

“We have faced that problem,” says Bay B. McCulloch ’12, chair of the Promotion and Design Committee. “But we really want to promote DAPA as not being this crack down association that doesn’t want people to drink ever and wants to get them all in trouble.”

DAPA shows students that they’re here to help and not hunt by reaching out through various campus events. Their freshman workshops are the centerpiece—freshmen are statistically the most likely to binge drink, according to DAPA—but they also host other functions like last Thursday’s “Learn How to Dance Sober.”  And of course, there are the infamous “1 out of every 2 students don’t play drinking games” Nalgenes.

“It’s nice that the facts on the bottles and the other things we distribute generate discussion on campus about what people actually do,” says Gober. “It helps to combat the peer pressure, the idea that ‘everybody’s getting ridiculously wasted on weekends so I should too.’”

Despite the near-impossible job that DAPA has, its members are proud of how far it has come in just four years of existence.  Already, according to McAlpine, the number of freshman admitted to UHS for alcohol issues has dropped. And don’t worry, your freebie fixation will still be indulged as DAPA is looking to continue getting its name out there and making strides to end alcohol abuse.

“We are at a big turning point heading into a new era,” says Gober.  “An era where a lot of people know about us and respect what we do.”