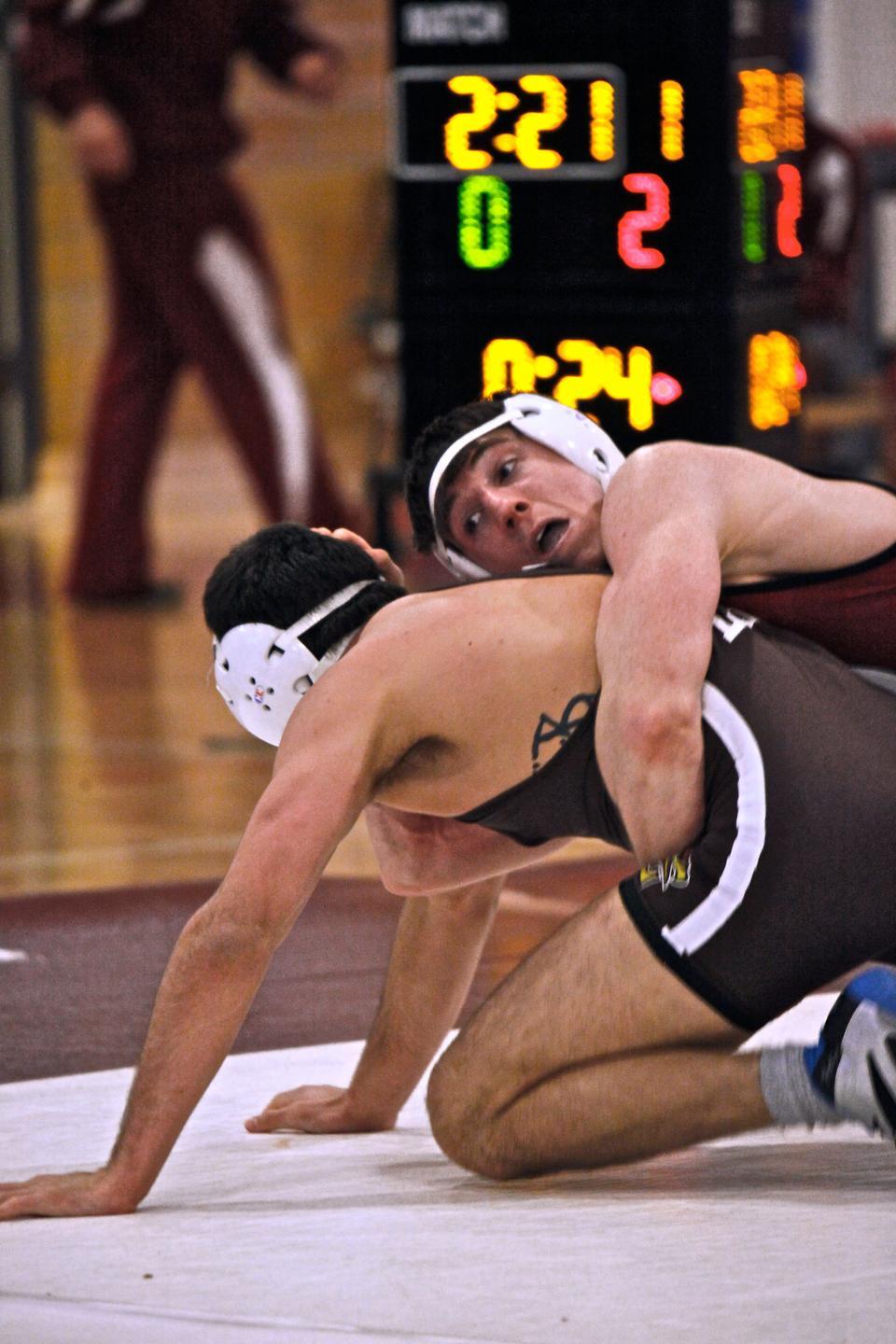 With lights shining and ESPN cameras rolling, J.P. O’Connor stood where he had waited to be for four years.

Staring down Cal Poly’s Chase Pami in the 157 lb. finals at the NCAA Wrestling Championships, O’Connor had one opponent left between him and an elusive national title. Amid all the added fanfare that comes with college wrestling’s biggest stage, the Crimson co-captain emerged from his match on Saturday night at the Qwest Center in Omaha, Neb. just as he had always envisioned—victorious.

“It didn’t start sinking in until half an hour ago,” O’Connor said. “I ran over and gave [Crimson] coach [Jay] Weiss a big hug and pointed up towards my family and tried to take in the moment, but I was just exhausted.”

The Harvard standout was understandably fatigued after powering through a field of 33 grapplers at 157 lbs., picking up his third All-American honor along the way. Yet even against the best competition in the country, top-ranked O’Connor rarely appeared challenged. The senior edged his first four opponents by a cumulative score of 42-6, even earning major decisions in the first round and in the semifinals.

“[O’Connor] scored more points in the tournament than he has in the last three months,” Weiss said. “He was dominating throughout the whole tournament. He’s never wrestled better—it was amazing.”

Still, in order to finally hoist his trophy, O’Connor would have to face an old, all-too-familiar foe. Seventh-ranked Pami eliminated O’Connor in the championships a year ago, and although the Crimson grappler got the upper hand in a matchup earlier this season, the Cal Poly senior was not ready to concede.

“[Pami] came right out and took me down, firing hard right off the bat,” O’Connor said. “I knew I needed to pick up the pace and match his intensity.”

To Weiss’ relief, the Harvard superstar rose to the occasion.

Trailing 2-0, O’Connor began to move his feet much more actively, spinning away underneath Pami. Although the Cal Poly grappler tried to hold O’Connor’s foot, the Crimson wrestler pulled away for an escape at 2:21 of the first.

Once the wrestlers returned to neutral, O’Connor showed the focus that carried him to the second-highest winning percentage in school history.

“At last year’s national championship, [O’Connor] lost to Pami with like 12 seconds left,” Weiss said. “I knew that would be a motivating factor.”

So when Pami caught O’Connor’s leg again with a minute remaining, the Harvard All-American went to a knee and wrapped behind his opponent, keeping just a toe in the boundary to earn two points of his own on the edge of the mat.

From there, the Crimson co-captain proved why he earned the top ranking in the nation. Opening the second period with a reverse, O’Connor took a 5-2 lead that he would not relinquish. As Pami made a number of charges through the second and third frames, O’Connor held strong to capture the title. The senior slowly removed his headgear with wide eyes after the referee raised his hand.

“[The championship] means everything,” O’Connor said. “I’ve been working towards this goal since I was a little kid, and definitely since I stepped on campus at Harvard, so it’s nice to end my college career on that note. Just talking about it puts a huge smile on my face.”

And as rewarding as the victory was for O’Connor, the Crimson program also rejoiced at crowning a third champion alongside John Harkness ’38 and Jesse Jantzen ’04.

“Jesse kind of paved the way in 2004, and people realized that you can set the goal of a national championship at Harvard,” Weiss said. “J.P. did the same thing this weekend. Now we’ve got guys saying, ‘I’m next.’ It’s exciting.”

The Crimson certainly hopes it can maintain this winning attitude, as it bids farewell to co-captain Louis Caputo (184) as well. Caputo—a two-time All-American himself—had a disappointing end to his career, bowing out to longtime nemesis Phil Keddy of Iowa in the second round of the tournament. Yet his sustained excellence through four years promise to influence the next generation of Harvard grapplers, including rookie Steven Keith (125), the Crimson’s only other representative at NCAAs.

“Louis didn’t have the performance he wanted, but that doesn’t change anything in how I look at him or how anyone in the program looks at him,” O’Connor said. “[Caputo] has done as much for Harvard wrestling as anyone has.”

But without question, the day belonged to O’Connor, who earned a place among his long-time heroes by tying Jantzen for the most wins in program history. O’Connor’s career record of 132-16 stands as a testament to four solid years in Cambridge.

“It’s an absolute honor to even be mentioned among those two people [Harkness and Jantzen],” O’Connor said. “The history of Harvard wrestling extends far beyond what I’ve done for the program.”

Yet as O’Connor hangs up his Crimson singlet on a perfect season and a storied career, the three-time All-American leaves a truly singular legacy, both on and off the mat.

“You know how I feel about him,” Weiss said of his co-captain. “He is a better person than he is a wrestler, and he’s a national champion.”