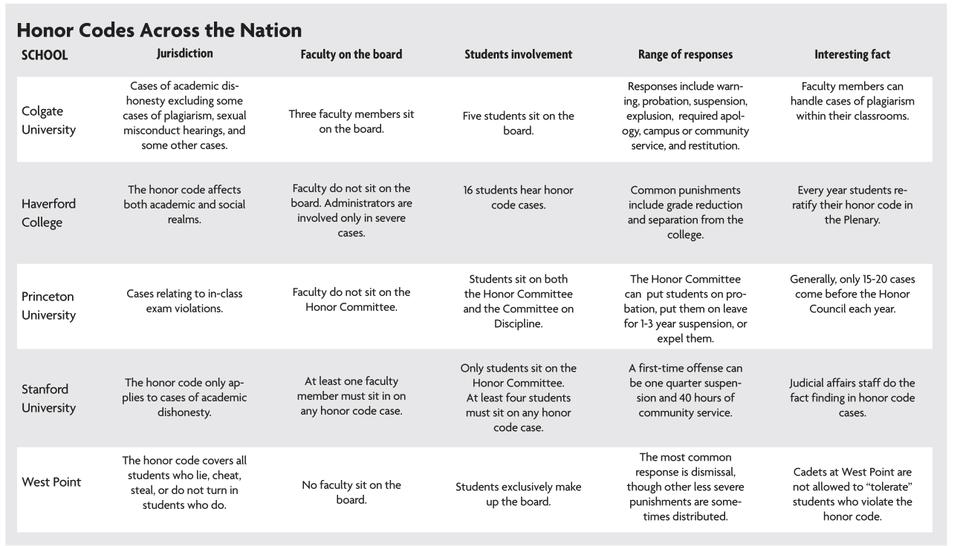 As the College turns its attention to a sweeping review of academic dishonesty at Harvard, one topic continues to come up in discussions: an honor code.

According to Dean of the College Evelynn M. Hammonds, faculty and adminstrators have begun preliminary discussions about the adoption of an honor code at Harvard.

“I think we’re at a moment where we must be thinking about doing something [about academic dishonesty],” said Dean of Undergraduate Education Jay M. Harris. “I think looking much more carefully at honor codes is certainly something that would only be responsible at this moment.”

Beyond the nebulous expectation that the policy would heighten student integrity, the format of a Harvard honor code—should one ever come to pass—remains decidedly unclear.

Despite the uncertainty surrounding the form and details of a potential Harvard honor code, one thing remains certain: many College administrators are looking for a way to combat academic dishonesty at Harvard—which Harris recently called “a real problem”—and they hope that an honor code may be the solution.

While the College adminstration’s discussions about student integrity have pointed to an honor code as a potential remedy to academic dishonesty, administrators are hesitant to describe the exact nature of a Harvard honor code and emphasize that the idea is in the premature stages of planning.

“Honor codes are a genus, not a species,” Harris says. “[We’ve] got to figure out what is the species that adapts well to [the Harvard] eco-system.”

Essentially, an honor code is a document signed by students who promise to uphold certain standards of conduct. The policy is typically accompanied by an assumption of integrity on the part of students—consequently, schools that institute honor codes will often allow or even encourage unproctored exams, for example.

But beyond these basic elements, the differences between one honor code and the next can be significant.

“It seems like there’s really a spectrum of types of honor codes to have,” says Gabriel Schwartz, student co-chair of Haverford College’s Honor Council.

While Schwartz says some schools, such as the United States Military Academy at West Point, have rigidly defined honor systems, Haverford has an honor code that evolves every year.

At Haverford, Schwartz says, “There’s much more of a focus on dialogue...on really getting to understand the person and their perspective.”

As part of the school’s semi-annual “Plenary,” undergraduates meet to change, adapt, and then eventually ratify a new version of Haverford’s honor code.

Meanwhile, at West Point the essence of the honor code is that “a cadet will not lie, cheat, steal, or tolerate those who do.” The code carries the serious expectation—accompanied by threat of punishment—that students turn in their peers who have violated the honor code or risk violating it themselves.

While at both Haverford and West Point, the honor codes’ jurisdiction extends beyond students’ academic lives, many other schools—such as Princeton and Stanford—have less expansive honor codes that are primarily restricted to matters of academic dishonesty.

Both Hammonds and Undergraduate Council President Johnny Bowman acknowledged that Princeton’s honor code could be a model Harvard might opt to emulate.

Princeton has an Honor Committee, composed of nine undergraduates and three alternate students, that hears and makes recommendations for cases involving charges of academic dishonesty.

On every exam students must write “I pledge my honor that I have not violated the honor code during this examination,” and sign their names. But Peter Dunbar, chair of the Princeton Honor Committee, says that the school’s honor code is much more than a sentence atop an exam page.

“The Honor Code permits students to take ownership of the classroom, of their own work,” Dunbar wrote in an e-mailed statement. “It also underscores a set of values and a focus on integrity that the University and its student body looks to promote, which is in line with our school’s mission and motto.”

The idea of an honor code is part of a broader movement within the College to address issues of academic dishonesty and promote a “culture of greater integrity,” according to Harris. Administrators say they hope it would bring about a change in College’s academic atmosphere.

“All the research shows an honor code does reduce plagiarism and academic dishonesty,” Bowman says.

But beyond just combating academic dishonesty, Harris says the College is hoping to promote a better “community of learning.”

According to Faculty of Arts and Sciences Registrar Barry S. Kane, the current academic environment of the College is a contradictory one.

“In general, we expect students to lead their lives with a level of integrity, and yet when we look at the way we do academic requirements and the way we do exams, there’s a stark contrast to that,” Kane says. “Basically the message we send is we expect you to cheat, and we’re going to do everything we can to stop that from happening.”

Harris echoed Kane’s sentiments, calling the faculty-student relationship at Harvard “sometimes more adversarial than I’d like it to be.”

Adams House Resident Dean Sharon L. Howell­—who went to a college with a honor code—says she hopes to see an honor code adopted at Harvard: “I would be very heartened if we were ready for a paradigm shift.”

Administrators stress that students must be involved and committed to the honor code at Harvard if it is to be a successful endeavor.

“The institutions in which honor codes have worked best are ones in which the students actively engage in supporting the honor code and where the notion of communal responsibility emanates from the students,” says Associate Dean of Undergraduate Education Noel Bisson, who previously worked with the honor code at Colgate University.

“Students need to be integrated into the creation of the honor code in every step,” Bowman says. “[The UC] wrote a short paper advocating a number of years ago for an honor code, so it’s something that we have been behind for a while.”

Hysen offered a more cautious outlook on student opinion: “I think that once a lot of the benefits of the honor code are clear, I think that it’s something that the UC and hopefully the student body will get behind.”

HONOR CODE AND THE AD BOARD

If Harvard College were to adopt an honor code, it remains unclear what effect it would have on the Administrative Board, the College’s primary disciplinary body.

Most schools with honor codes include students as part of their disciplinary bodies. For example, Princeton’s Honor Committee investigates possible violations of the honor code and makes a recommendation of disciplinary action to their the Dean of Undergraduate Students.

Some administrators worry that faculty members might not be comfortable with trusting students to keep cases confidential.

“In the past, the concern with students was not at all couched in terms of ceding power, it was a matter of confidentiality,” says Kane, who also sits on the Ad Board.

Bisson says that an honor code would require an increase in faculty and administrators’ trust in students.

Currently, the College does have a Student Faculty Judiciary Board, though it has only heard one case since its inception in 1987.

The Committee to Review the Ad Board recommends altering the role of the Student Faculty Judicial Board and renaming it the Student-Faculty Administrative Board, which would be given a larger role in deciding cases of academic dishonesty. Students would have to opt to have their cases heard by this second academic board.

As of now, it remains unclear how an honor code would be integrated with some of the Ad Board Review Committee’s recommendations.