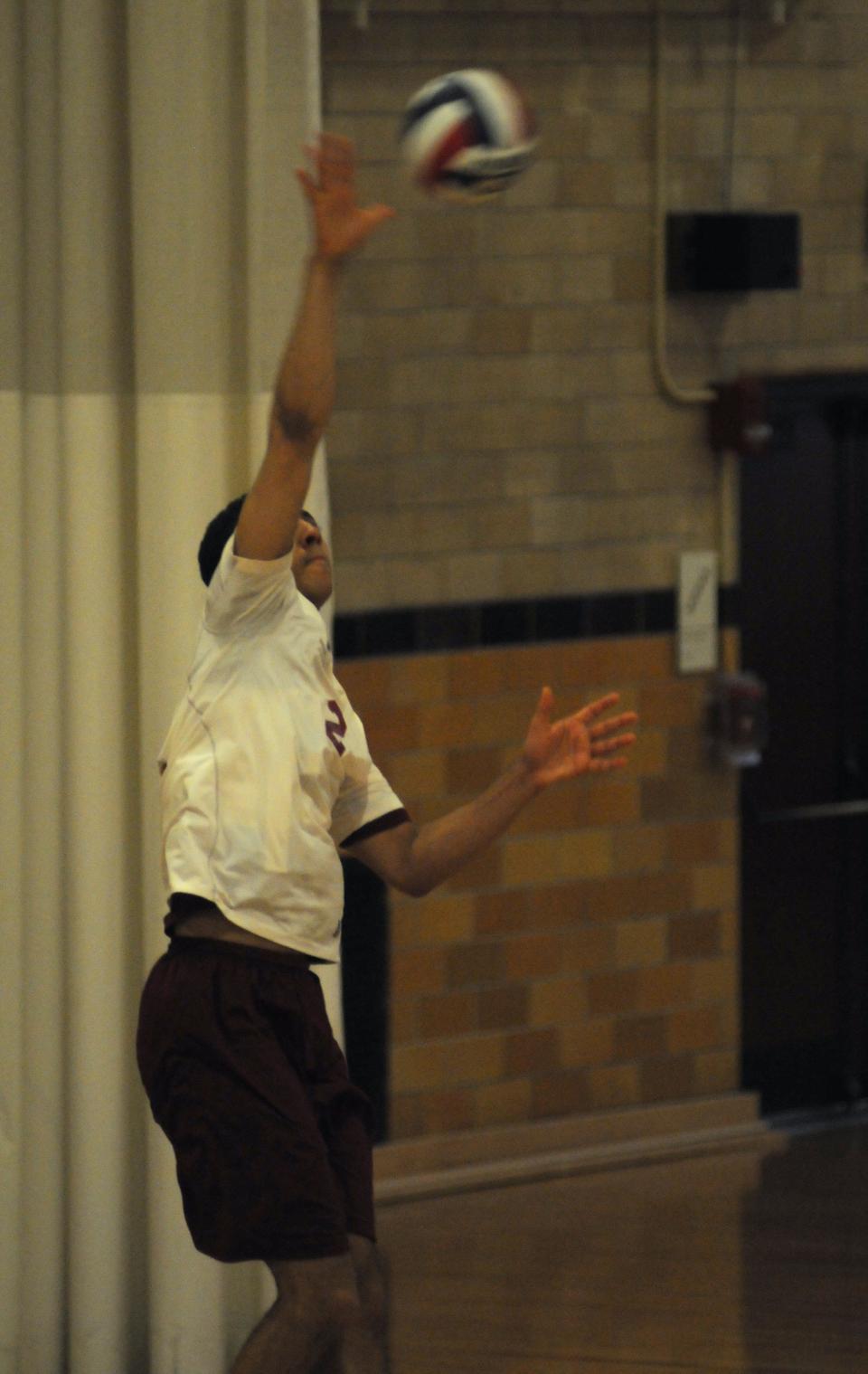 Senior Soren Rosier, shown here in earlier action, and the men’s volleyball team entered the weekend on a tear but came up short in two division contests. The Crimson fell to Rutgers-Newark and NYU. By Kevin H. Lin
By Scott A. Sherman, Contributing Writer

Coming off a three-game winning streak and heading on its biggest road trip of the season, the Harvard men’s volleyball team had set itself up to make a run at a division title. But as the team went for the kill against two key divisional opponents, it came out flat.

The Crimson (5-12, 3-3 EIVA Hay) was swept by Rutgers-Newark (12-11, 7-0) Friday night and was outlasted in five sets by NYU (5-16, 1-6) Saturday afternoon in a pair of losses that could potentially cripple the squad’s playoff chances with just two games remaining in the regular season.

With Friday’s win, the Scarlet Raiders clinched first place in the Hay Division of the Eastern Intercollegiate Volleyball Association, in which only two teams from the division make the playoffs. The losses dropped Harvard into third place in the Hay, behind Rutgers-Newark and Sacred Heart—which will visit Cambridge next weekend.

“It’s always tough to come off a weekend of matches and come out with no wins,” co-captain Gil Weintraub said. “So it’s a little unsettling and a little tough to deal with.”

A thrilling fourth set saw 24 ties and eight lead changes alone. In the fifth set, Harvard rallied back from a three-point deficit to even things up at 6-6, but the persistent Violets were able to take advantage of Crimson attack errors to hold on for its first Hay Division victory of the season.

“It was a pretty big heartbreaker,” senior Soren Rosier said. “That’s a team I think we should beat, and we had some opportunities to beat them. We just didn’t take advantage.”

Four NYU players finished with double-digit kills, led by sophomore Pat Dodd, who had 21 to go with nine digs and two key solo blocks. Junior Ori Oren finished with 67 assists and missed a triple-double by just one kill.

“At some points, we didn’t play with the same confidence or swagger that we’d been showing earlier,” Weintraub said.

Despite the pair of tough losses, the team isn’t letting its confidence dwindle heading into a huge final weekend of regular-season play.

“Losing to NYU didn’t by any means knock us out,” Rosier said. “If we go in and take care of business next weekend, we’ll get second place, go to the playoffs, and I believe that’s how it’s going to go.”

Friday night’s contest against the Raiders brought less drama, as Rutgers-Newark wrapped up its division title in a 3-0 sweep at the Golden Dome.

The Raiders were led by sophomore outside hitter Marcin Midura, who had 17 kills in Rutgers-Newark’s 30-28, 30-26, 30-24 victory. Despite the sweep, the match was competitive throughout, with 26 ties and 10 lead changes.

In the first set, the Raiders jumped to an 18-12 lead before a Crimson rally pulled Harvard within one, 18-17. But after the teams alternated points as the game moved toward its climax, Rutgers-Newark was able to score the game’s final two points and win by that margin.

In set two, no team was able to get ahead by more than four points. Rosier and freshman Derek Jansma were able to co-block a Raider match point at 29-25, but a Harvard mistake on the next play cost the Crimson the game.

“We were just outmatched,” Rosier said. “They’re playing really well right now. We made it close, we fought...we just didn’t capitalize on certain opportunities that we had to at least take a game from them.”

Kuld had 15 kills and seven digs for the Crimson, and Jones added 14 kills and two aces. Rosier contributed six kills and four block assists, while Lothman dished out 35 assists.