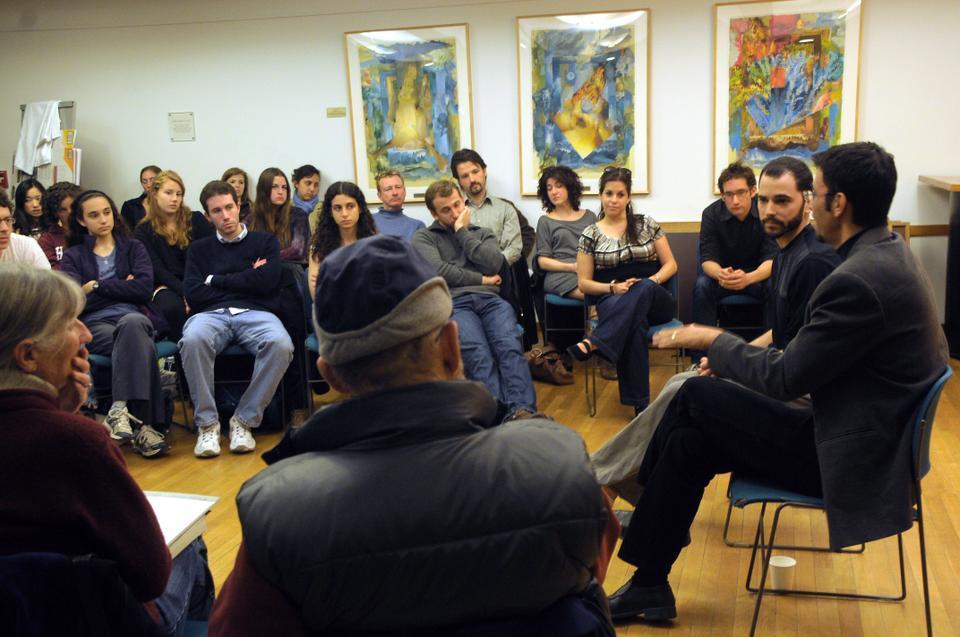 Harvard Hillel played host last night to “Israel-Palestine: Bridging the Divide,” a discussion that featured speakers representing both sides of the decades-long conflict in the Middle East.

At the event, which was sponsored by the pro-Israel organization J Street, speakers promoted grassroots peace activism and the importance of the commonalities among all people.

Born and raised outside of occupied Jerusalem, Aziz Abu Sarah—a Palestinian activist and the Director of Middle East Projects at George Mason University—explained how the death of his brother at the hands of an Israeli soldier led him to join the ranks of the Fatah Youth Movement—a group built on the idea of Palestinian nationalism.

Kobi Skolnick, who is from southern Israel, shared his perspective from the other end of the conflict. As a teen, Skolnick was part of the fundamentalist Kahana movement. To promote “Jewish power,” he said that he and fellow Kahana members were encouraged to use violence against Palestinians.

But after seeing the suffering of their “enemies,” both Skolnick and Sarah came to question their ideologies.

According to Sarah, who has used the blogosphere to promote the peace process, both men recognized “the connection of one man to another in the face of universally understandable pain.”

The pair now work to spread awareness and caution against the “eye-for-an-eye” ideology that has promoted the cycle of violence in Israel and the occupied Palestinian Territories. To this end, “the project involves building bridges between Israel and Palestine and also between every human being,” Skolnick said.

“I thought it was very powerful to hear both sides of the story and to hear very personal accounts from people on both sides,” Emily S. Unger ’13 said.

The discussion also shed light on the often misrepresented ideologies of both Palestinians and Israelis.

Sarah noted that according to the latest statistics, more than 75 percent of Palestinians polled were in favor of a two-state solution. Moreover, he added, more than nine in 10 Palestinian youths polled supported using nonviolent means to achieve a solution.

Skolnick explained that there are multiple underground peace activist groups in Israel. But he also said that the groups are often hindered by a lack of funding and the Israeli government’s efforts to arrest members of such groups.

“I could be arrested if I go back,” Skolnick said.

Despite the seemingly insurmountable tangle of issues that define the conflict, both Skolnick and Sarah maintained that peace activism is the best means for securing a solution.

“We’re not asking anybody to be pro-anybody but rather to be pro-solution,” Sarah said. “We want to think pragmatically how we can resolve this conflict—not because we’re pro-one side, but rather because we want both sides to have freedom and security and to be safe.”