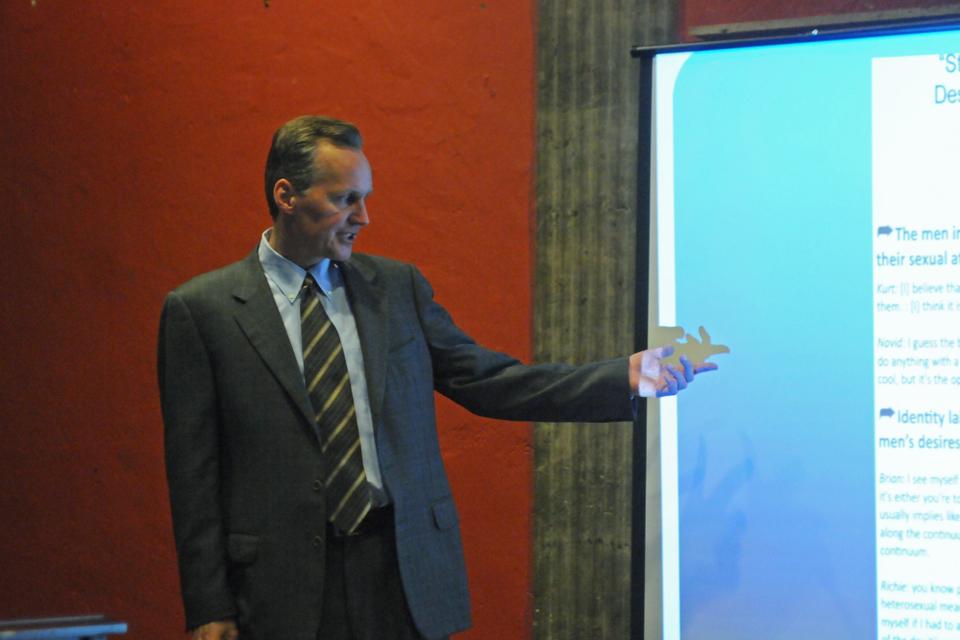 The air in the Adams Upper Common Room grew stuffy as more than 50 members of the Harvard community crammed in to attend a discussion on “Scientific and Social Explorations of Bisexuality.”

After an audience member complained about the heat, speaker John R. Sylla ’81, an affiliate of the American Institute of Bisexuality (AIB), said “Yeah, we’ve got some hot people in this room.”

Sylla’s discussion—which was sponsored by the Harvard College Queer Students and Allies, the Trans Task Force, and Girlspot—mainly drew on several scientific and sociological studies to address the question of how to understand bisexuality.

The talk, which was part of Gaypril—a month dedicated to celebrating LGBT awareness—also touched on sexual behavior, experimentation, and attraction as components of sexual identity and orientation.

“There are a lot of different theories bouncing around, from bisexuality doesn’t exist to everyone is somewhere on a spectrum,” said Lucy C. O’Leary ’12, political co-chair of QSA and one of the organizers of the event. “This has a lot of relevance because the straight community and the gay community tend to shun bisexual people, and this scientific perspective can help bridge the gap.”

Sylla expanded on the ostracism of bisexuals by both gay and straight communities, saying that the gay community tends to see bisexuals as undermining the queer community’s struggle for political rights, whereas straight people are often reluctant to question their own sexualities.

But Sylla offered some statistics that challenged the very notions of “gay” and “straight.” According to one New York-focused study that Sylla cited, 71 percent of men who reported having sex exclusively with other men in the past year identify as straight, even though their behavior would be termed gay by most observers.

Sylla said that it was important to note that people tend to identify as gay or straight because of a habit of erasing a “middle area.”

“We shouldn’t have to choose between those two categories,” he said. “It would be nice if there were more honest discussion of the gray areas.”

Audience member Gillian Einstein, a visiting professor from the University of Toronto and editor of the book “Sex and the Brain,” said that society places too much emphasis on sorting people into distinct classifications.

“The big question is why we’re so intent on having these categories,” she said. “Why can’t we just rest with people being what they are?”

Sylla said that his friend and former colleague Fred “Fritz” Klein, a bisexual activist and psychiatrist and founder of the AIB, had an inspiring response to people who came to him exwpressing concern that their feelings or practices were shameful or weird—“That’s wonderful!” Klein would reply.

Sylla encouraged all those in attendance to help any friends dealing with secret desires or fetishes to likewise embrace the “wonder” of arousal.

­—Staff writer Alice E.M. Underwood can be reached at aeunderw@fas.harvard.edu.