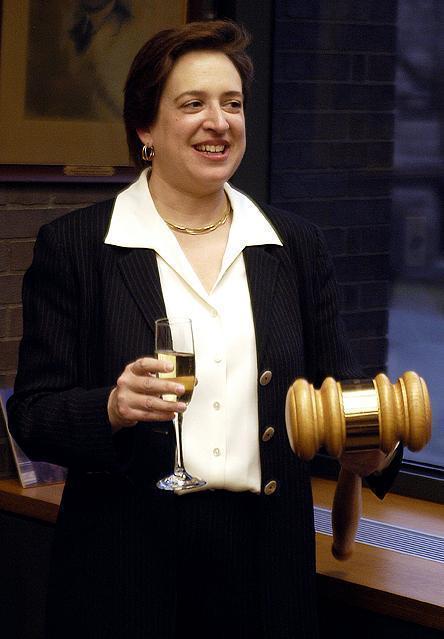 Kagan, seen during a champagne reception celebrating her appointment as HLS Dean in this April 2003 file photo, ascended to the position of dean only two years after receiving tenure.
By Zoe A. Y. Weinberg, Crimson Staff Writer

In her pursuit of the highest standards at Harvard Law School during her tenure as dean, Elena Kagan gained a reputation for her effective leadership and assertive management style.

Though her nomination as Supreme Court Justice on Monday has been warmly received by many colleagues, several individuals among the Law School’s faculty and staff interviewed by The Crimson in the last month raised questions about how Kagan’s temperament may translate to her time on the bench.

At the official announcement of her nomination, President Barack Obama hailed Kagan, currently Solicitor General, as a “consensus builder” known for “her openness to a wide range of viewpoints.”

During her five years as dean, Kagan pushed through a major curricular reform and won the hearts of students and faculty alike by reaching out with simple gestures, such as opening an ice skating rink (now closed due to budget cuts) and providing free coffee.

But multiple interviews with Law School staff depict Kagan as a brusque leader whose ambitious agenda of effecting change created a culture of high standards and sometimes fostered tense relations with some of her co-workers.

“She brought very high expectations to the school,” said current Law School Dean Martha L. Minow, who enthusiastically endorsed her predecessor’s nomination on Monday. “She held no one more than herself to high standards. So ‘We’re fine, we don’t have to be stepping it up’—that attitude was over when she was dean. Some people didn’t really like it, some people disagreed.”

“Not everybody loves change,” Minow added.

Several faculty members credited the success of Kagan’s sweeping initiatives and her ability to break through bureaucratic logjams at the Law School to her strong-handed management style.

“There’s a lot of navel-gazing in academia,” said Dean of Students Ellen M. Cosgrove, who lauded Kagan for transforming the pace and productivity at the Law School. “She was someone who wants to get the job done quickly, on a time-frame that is more consistent with the real world and the corporate world.”

Fresh from a post in the White House, Kagan brought intensity along with her proposals to remake a Law School tired of being second best to perennial rival Yale Law and criticized for a lack of concern for its student body.

Clark faced an ideologically divided faculty during his time as Dean, and one of his major accomplishments was soothing the rifts that would pave the way for some of Kagan’s most transformative initiatives.

But an ambitious reform campaign at an institution that has been described as “Beirut on the Charles” for its vitriolic academic disputes also led to bruised egos and heated conversations, according to multiple sources at the Law School.

Law School Professor Mark V. Tushnet ’67 acknowledged that he had heard “that she would lose her temper,” but he added that Kagan led the school with a “firm hand” like a good manager. Kagan was “willing to fire people that needed to be fired,” Tushnet said.

Few faculty members interviewed for this article voiced displeasure with Kagan’s management style, but some staffers and administrators said that the former dean’s high-energy, ambitious agenda placed a strain on their working relationships.

Former director of the Law School library Harry S. Martin III ’65 observed that some staff members working under Kagan “didn’t seem to get along with her, didn’t warm to her.”

In the “pursuit of excellence,” Kagan set the bar high for her colleagues and created “a culture of incredibly high expectations and high stakes,” according to former Registrar staff member Leslie Sutton-Smith.

“It was not as much a collaborative effort as it was making sure everything was right before it got to Elena,” Sutton-Smith said. “You have to come to the table 150 percent prepared because she will find a hole in whatever your argument is.”

“As a result of that, she could be perceived as someone to be afraid of,” she added.

In pushing for change, Kagan often displayed an insensitivity to the opinions and feelings of others, according to Maura H. Kelley, a faculty assistant who worked at the Law School for over 25 years.

“If you go against her, she doesn’t take very kindly to that,” said Kelley, who was familiar with staff assistants that worked under Kagan. “If she presents an idea, she wants everyone to accept it immediately without question, without debate, without input.”

But Sara D. Zucker, director of International Legal Studies Program, said that the word “fear” does not spring to mind in describing her interactions with Kagan in the past.

A “forceful” personality who made very clear “what she wanted,” Kagan held everyone up to the same, albeit very high, standards—including herself, according to Zucker.

Kagan was also quick to acknowledge a job well done.

Kagan instituted what was known as “pie-day,” an occasion in November for staff to gather, eat pie, and write thank-you cards to one another. She also made a point of remembering staff members’ names—which one staffer said was appreciated at an institution where relationships between faculty and staff are often tinged by elitism.

Kagan’s colleagues overwhelmingly voiced their support for her nomination despite her sometimes abrasive manner, which they saw as a byproduct of her strong desire for implementing change at the Law School.

“She was pushing for the school to be better every single day,” Minow said. “Some people didn’t really like being held to a standard and didn’t like being told you could do better.”

University Professor Frank I. Michelman said he believed her experience leading the Law School would translate well to her role on the Court.

“You have to deal with a lot of constituencies in ways that are considerate of and responsive to their interests,” Michelman said.

“Most relevant to the Supreme Court post is her decision-making style,” Minow said. “She would listen to each person carefully, remembering their comments even better than they did; approach each issue with an open mind; and reach a judgment based on fairness.”

“She was a beloved dean, as I hear regularly from faculty, students, and staff,” Minow added.

But one professor, who requested to remain anonymous to maintain relations with the Law School, said that Kagan’s tense relations with staff provide clues to how she may conduct herself as a justice.

“The treatment of subordinates is definitely relevant to her values and our assessment of her as a progressive justice,” the professor said, adding that Kagan’s prowess as a “consensus builder” who would be able to sway Justice Anthony Kennedy, for example, is undermined by her temper, which the professor believes may hinder her ability to work well with others on the bench.

“Justice Kennedy would not like that,” the professor said.

—Elias J. Groll contributed to the reporting of this story.