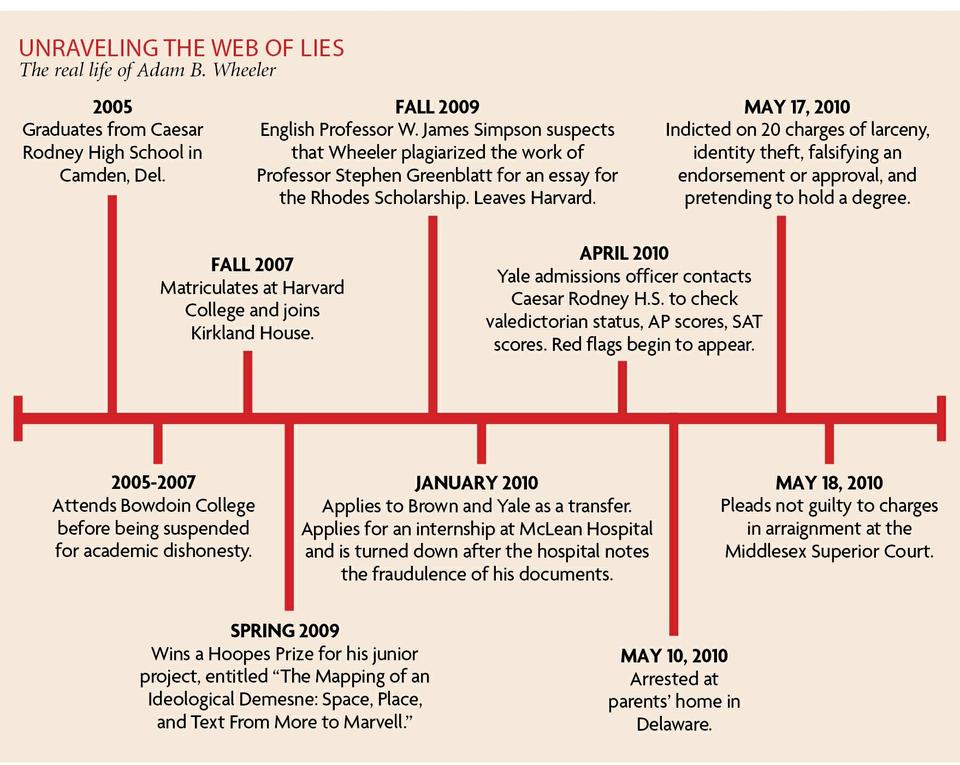 The revelation that former Harvard student Adam B. Wheeler eluded the illustrious Harvard College admissions office has left some wondering what went wrong in the process and how Wheeler could have taken his scheme so far.

By creating an alternate life for himself—complete with letters of recommendation that professors never wrote, SAT scores that he never earned, and schools he never attended—Wheeler bought himself two years at Harvard and tens of thousands of dollars in scholarships, grants, and financial aid, prosecutors allege.

Barmak Nassirian, associate executive director of the American Association of Collegiate Registrars and Admissions Officers, said that Harvard could not be wholly blamed for Wheeler’s ability to slip through the admission process.

“There is not any institution in this country that can afford to or does verify everything people submit. It’s just not a practical possibility,” Nassirian said. “You can’t really fault Harvard for not calling every high school and obtaining a duplicate copy of every transcript and every recommendation people submit.”

In his transfer application to Harvard, Wheeler submitted transcripts reflecting perfect grades in his freshman year at MIT and attendance at the prestigious Phillips Academy in Andover.

Wheeler—who actually spent two years at Bowdoin College before transferring to Harvard in 2007—never attended MIT or Phillips in Andover. MIT does not even award letter grades to first-years.

In his application packet, Wheeler also submitted an SAT score report stating that he had earned a perfect 1600, when he had actually taken the test twice and scored 1160 and 1220, according to prosecutors.

“I just can’t wrap my head around that one, quite honestly,” Nassirian said about the fraudulent SAT report. “[Wheeler] took the most mechanical, most verifiable components of the application package and put fake ones in their place, and managed to get past the very robust mechanisms that must be in place.”

Nassirian pointed out the many layers of defenses against plagiarism inherent in documents produced by third parties, such as school transcripts and standardized test scores.

Wheeler somehow mimicked real documents convincingly enough to bypass these questions, or such checks were overlooked by admissions staffers.

Robert Bardwell, secondary level vice president of the American School Counselor Association, did not place the blame on the admissions office, stating that the sheer volume of applications is too large to permit a flawlessly thorough screening.

“There are so many pieces of paper that come through, that to check every application, every transcript, every letter of recommendation—you can’t possibly do that, and you have to assume that people are honest,” Bardwell said.

Though Bardwell said that he thinks the fear of being caught and thus risking placement on the blacklist at colleges would deter most would-be application fakers, he suspects that still some others are willing to lie on their college applications.

Indeed, Wheeler is not the first to be accused of cheating his way into the Ivy League.

In 2008, Akash Maharaj was convicted of bilking Yale out of $46,000 in financial aid by submitting a false transcript from Columbia which led to his admission as a Yale transfer student.

In 1991, 31-year-old James A. Hogue—who gained admission to Princeton by posing under the alias Alexi Indris Santana, an orphan from Utah—was convicted of stealing $22,000 from the University. While awaiting sentencing, he enrolled as a Harvard Extension School student and stole $50,000 in minerals and gems from the Harvard Mineralogical Museum.

“The minute Harvard gets involved, there’s this level of scrutiny,” Nassirian observed.

—Esther I. Yi contributed to the reporting of this story.