Plugged In: Computers In Class

As Macintosh stormed the digital world, Harvard formalized the computer science concentration and President Bok urged increased use of computer technology in classrooms 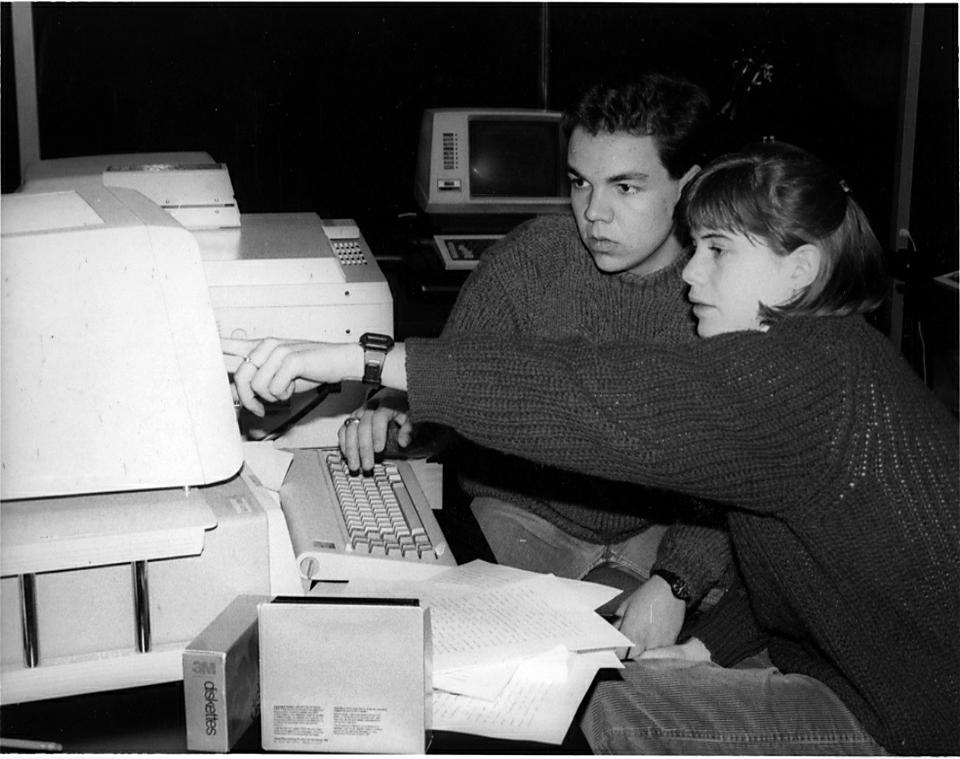 After the arrival of the first Macintosh computers, written notices were suddenly replaced with word-processed posters as student groups gained access to desktop publishing. In his annual report to the Board of Overseers in 1985, then-University President Derek C. Bok asked faculty to embrace the potential of computing technology to revolutionize University education by limiting “the passive experience of listening to lectures and reading texts.”

Yet personal computers were largely new to its users—and the Harvard Computer Society was founded to help support user groups for the new IBM, Apple, and Compaq systems.

Christopher D. Carroll ’86—a self-professed computer geek—said he had an Apple II computer as early as high school and co-founded the Harvard Computer Society when he came to college. The club sponsored demonstrations of the Apple IIC in lecture halls in the Science Center, attracting audiences of about 200 people.

Carroll said that Harvard lagged behind some other universities that had already created formal computer science concentrations. Until Carroll was a junior, the only academic option available was to be an applied math major with a specialty in computer science.

“It was an attitude of certain faculty members that Harvard wasn’t a trade school,” Carroll said. “Harvard was for the intellectual elite and studying computers was a trade, not an art or a science.”

And it was an era when computer science students worked late at night—often using terminals in the Science Center—because the systems worked much faster at night when there was less traffic. As many as 60 people could be sharing a system at once.

“That culture stayed around at least a decade longer than it needed to,” Konstan said. “It became a tradition that if your problem set is due at 10 a.m., you start at 11 or 12 and work through the night.” Konstan added that there was a tremendous sense of community during this time because he and his classmates largely worked in the same labs in the Science Center at night.

Rapid changes in the field were unmistakable, as almost all the teaching fellows in the department were undergraduates.

In addition, as early as 1983, every student had access to what was called a “low priority” computer account with 10 kilobytes of storage—about five typed pages. These storage accounts were created so students could do the programming work required to fulfill their quantitative reasoning core requirement, QR-A, where students learned basic programming.

Computer science was not formally in the Core curriculum, but according to Konstan, the inclusion of basic programming into the quantitative reasoning courses was a way of saying that Harvard believed every student needed these skills—but without having to create a whole batch of new core courses.

Starting in the mid-1980s, every Harvard undergraduate had an account that they could use to e-mail or transfer files anywhere in the world. Harvard was part of the Unix-to-Unix Copy network, which allowed for digital data transmission practically in real time. Data transfer could take a full day, depending on how far it needed to travel.

“I don’t know if it was a conscious decision or not, but Harvard trusted its students to an amazing amount of interconnected computing,” Konstan said.

Konstan said that Harvard came out with a new network map about once a month, which showed the path of computers that would need to be called to send the message to its destination.

In the mid-1980s, Harvard also partnered with Hewlett-Packard and other companies to integrate state-of-the-art technologies into the classroom.

A cornerstone of the New Pathway program were eight terminals and five or six students who were trained by Professor G. Octo Barnett to answer questions for students.

“We set up problems that students tried to answer using the computers,” Barnett said. “The whole idea of having computer simulations was certainly unique.”

New technologies were also made available to undergraduates. In the fall of 1985, the course “Introductory Biology II” incorporated electromyography systems used to track muscle contraction—even though there were only five in existence in the world at the time.

According to Elizabeth L. Brainerd ’85, who taught a section for the course, “It was certainly at the cutting edge of technology at the time.”

­—Staff writer Laura G. Mirviss can be reached at lmirviss@fas.harvard.edu.