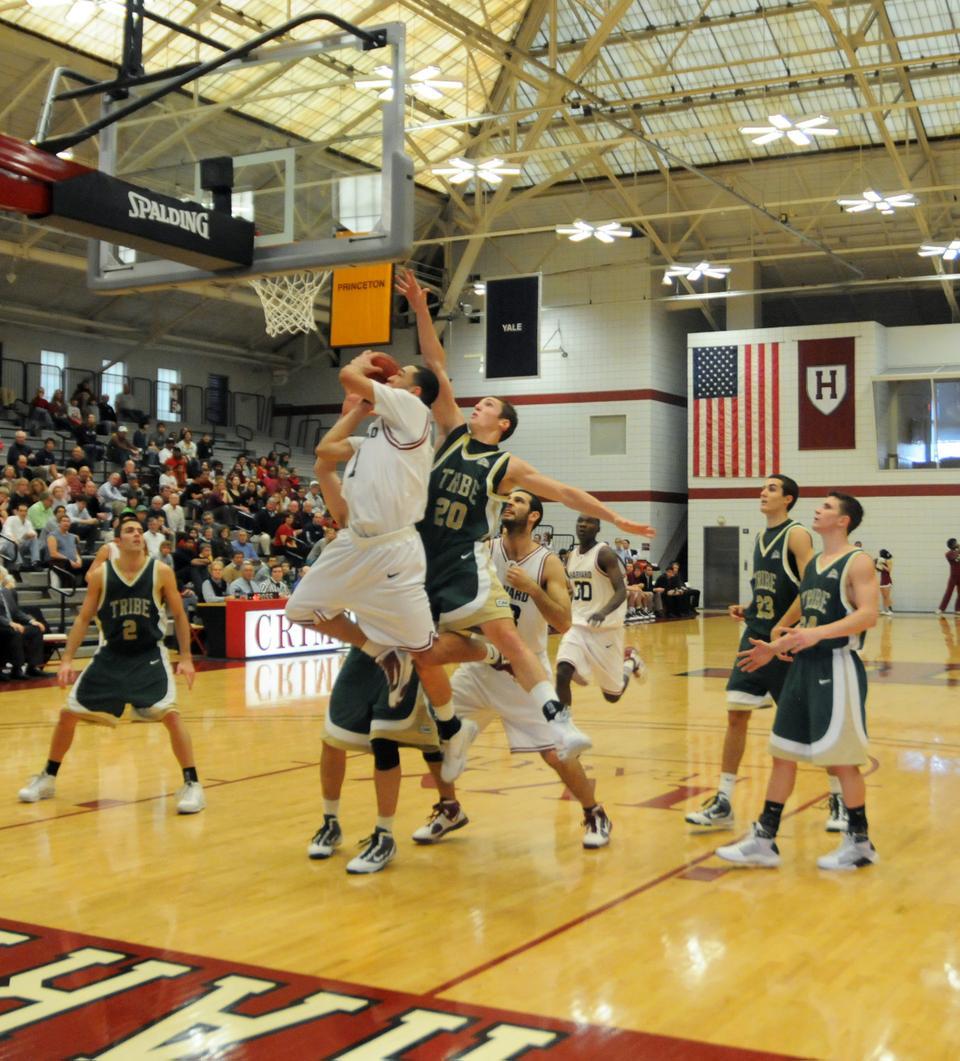 Freshman Christian Webster elevates to the basket as he is contested by William and Mary’s Quinn McDowell during Harvard’s triple-overtime victory over the Tribe in the Crimson’s second game of the season. By Alexandra C. Dowd
By Dennis J. Zheng, Crimson Staff Writer

In only the squad’s second game of the season, it became quite clear that Harvard men’s basketball was going to be something special.

The sign came in the form of a buzzer-beating miracle—a heave let fly 25 feet away from the basket, off the fingertips of the savior of Crimson hoops: co-captain Jeremy Lin.

A crowd of 1,297, packed into Lavietes Pavilion Nov. 15 for Harvard’s home opener, played witness to a triple-overtime dogfight against William & Mary, a game that ended on one of the most memorable shots ever taken in the building.

With under 10 seconds to play in the third overtime period, the Tribe’s Sean McCurdy snaked his way down the right side of the lane and knocked in a right-handed layup, giving his team an 85-84 advantage over its hosts.

With 3.6 seconds on the clock, Lin, who had been hovering on the far side of the court, took the inbounds pass at his own three-point line.

Sprinting down the right side of the court, he dribbled once, then again. Lin was bumped hard on the left hip by a leaping William & Mary player at midcourt, but the referees swallowed their whistles—and so the guard continued on with one more dribble.

Then came the hard part.

Lin gathered the ball up to let loose a shot—presumably seeking a foul. There were certainly grounds for a call: a member of the Tribe nudged Lin’s left shoulder as he went up to shoot, forcing him sprawling to the ground.

But the only thing the closest official needed to do was signal a made basket, as Lin’s push-off-his-right-shoulder-while-falling-backwards prayer was answered.

His ears buzzing with the revelry he had just incited, Lin sprang up from the court and dashed backwards towards the hoop he had been under less than five seconds ago.

His teammates not far behind, Lin ran until he couldn’t go any farther—so he leapt and took a few steps up the white cinder-block wall bordering the court.

Lin’s choice of celebration was rather fitting. For a split second, he had again accomplished the impossible. Against the Crimson playmaker, nothing stood a chance—not even gravity.

The long-distance shot, which gave Harvard the 87-85 win—its second victory in as many games—landed the veteran on highlight reels all over the nation and negated a big comeback for William & Mary.

The Tribe had trailed by as many as 13 points in the second half before rallying to force overtime.

Lin, who had a team-high 19 points and nine assists, had plenty of help in regulation and overtime. Sophomore guard Oliver McNally had 17 points, and most importantly, the Crimson frontcourt came up big.

“[Senior] Pat [Magnarelli] and [sophomore] Keith [Wright], those two guys in particular, were the difference for us,” Harvard coach Tommy Amaker said at the time.

Wright and Magnarelli combined for 24 points and 14 rebounds, making several key plays down the stretch.

The grueling win gained even more significance as the season continued for both squads.

“That was a big game for us,” Lin said. “Just the way we won it, it built a lot of team chemistry and a lot of confidence in our team, and I think that helped us in terms of pulling out close games...It was just a big thing for our team that early on.”

The Crimson would build on that momentum over the next two months, setting a school record in non-conference wins with 11, and William & Mary would have a noteworthy season of its own.

The Tribe was the CAA tournament runner-up and won 10 road games—including victories at Maryland and Wake Forest—to put together a résumé impressive enough to gain it a berth in the NIT, where it fell in the first round to eventual runner-up North Carolina, 80-72.

But for one day in November, William & Mary was in the news for the wrong reason.

It could not come up with a stop when it needed it the most, setting up a most memorable ending that began a historic season for Harvard basketball.