The Conan We Knew 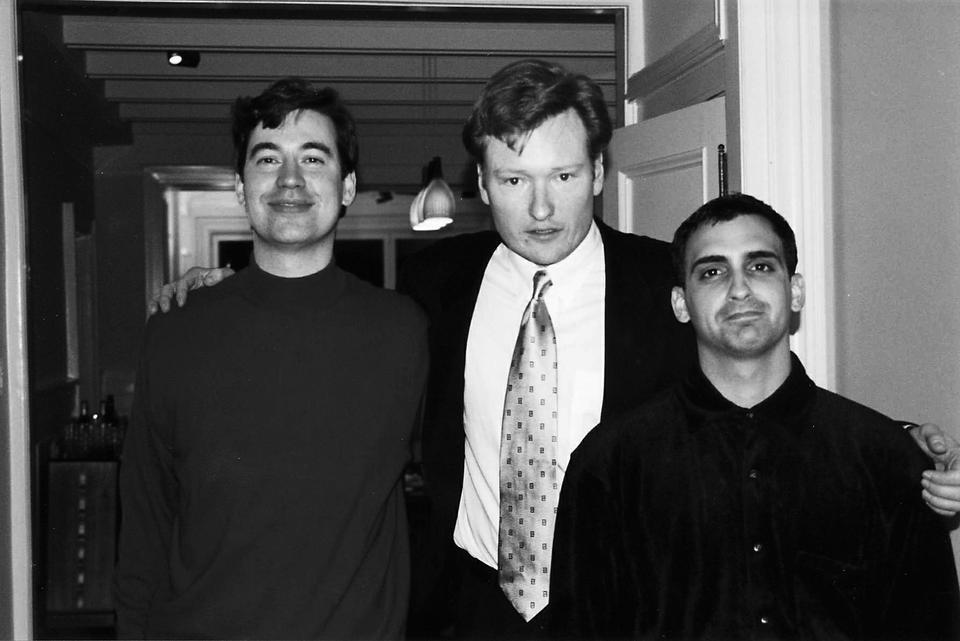 The long legs of 18-year-old Conan C. O’Brien ’85 bounded across Harvard Yard, red hair bobbing up and down, his impeccable mock cockney accent ringing out into the night.

O’Brien’s Holworthy 16 and later Mather House roommate Eric B. Reiff ’85 strode alongside him, laughing aloud and thinking to himself, “That’s unusual.”

“Most of us are not walking around making up musical comedies in our heads when we’re 18 or 19-years-old,” Reiff said.

The subject of O’Brien’s musical ode was an elderly gentleman who worked the desk at Lamont Library in 1985. O’Brien befriended the book checker, always engaging him in hilarious banter on his way out of the library, according to Reiff.

From running the Lampoon, to penning Saturday Night Live sketches, to hosting Late Night with Conan O’Brien for 16 years, and finally to his brief stint as host of The Tonight Show, Reiff said there are things about O’Brien that have never changed: keen powers of observation, a killer range of spot-on impressions, and a genuine interest in everyone he meets. And, of course, that hair.

The third child of six in a big Irish Catholic family, O’Brien grew up in Brookline, Mass. with father Dr. Thomas O’Brien, a physician and Harvard Medical School professor, and mother Ruth O’Brien, an attorney. The O’Briens were incredibly “gracious and generous,” Reiff said, and frequently opened their home to their son’s roommates.

“It was this big, rambling, wonderful family house filled with wonderful family people and a loving mother and a loving father—it was almost the kind of family you dream of having but don’t think can be found anywhere,” said O’Brien’s former roommate, Ford Foundation President Luis A. Ubiñas ’85.

According to Ubiñas, O’Brien’s middle-child status forced him to cultivate two important skills: watching and communicating.

Indeed, the other member of the Lamont book checker’s “two-person admiration society,” O’Brien’s friend Edward L. Widmer ’84, said that “with Conan, every single thing over the course of the day is an object of humor and observational comedy and wordplay—it was just always great to be around him.”

After graduating as valedictorian from his class at Brookline High School, O’Brien arrived at Harvard full of contagious energy.

“My first impression was that he was incredibly tall and incredibly red—he seemed seven feet tall to me and that giant shock of unruly red hair was unlike anything you’ve ever seen,” Ubiñas said.

“I have to stand on a chair when we kiss,” his friend Mark R. Ganem ’85 joked in an e-mail to The Crimson.

But did his peers know he was destined for stardom?

“I always thought that of all the talented people I knew in college, Conan was the most likely to appear on the cover of Time magazine—I just thought it would be for mass murder,” Ganem continued in jest.

In a Commencement issue for the graduating class of 1985, The Crimson called O’Brien the class’s “pre-eminent jokester” and predicted big success for the “gangly, freckle-faced jester.”

But O’Brien almost didn’t get the chance to cultivate this glorious reputation—all because of innocent curiosity and a bag of Twinkies.

One question plaguing O’Brien and his roommates during freshman year was whether or not Twinkies were combustible.

In searching for the answer, the boys managed to set a garbage can on fire.

“For fear of burning down all of Holworthy, we threw the flaming can out the window, where it promptly landed at the foot of one of the resident deans—fortunately we were all such good guys that no one wanted to kick us out," Ubiñas said.

Had O’Brien been expelled, he would have had fewer chances to perfect his imitation skills, which have served him well in the world of late night talk shows. Friends say O’Brien mimicked everyone from professors to politicians.

Once, O’Brien and Reiff attended a convention to support Evelyn F. Murphy, who was running for Mass. lieutenant governor against John F. Kerry. Kerry himself strolled over to the Murphy T-shirt clad boys and started persuading them to shift their loyalties in a “very high school politics kind of way,” Reiff recalled.

“Conan thought this was hysterically funny,” Reiff said. “He loved to talk about it and reenact it—he’s a great mimic and he noticed things other people didn’t notice.”

Reiff said that if there was one thing in O’Brien’s life that was not a joke, it was his schoolwork.

A History and Literature concentrator, O’Brien crafted a senior thesis entitled “The ‘Old Child’ in Faulkner and O’Connor.” The 72-page typewritten work argues that the New South’s emerging identity is manifested in the literature of William Faulkner and Flannery O’Connor via the motif of children that age too quickly, a phenomenon O’Brien termed “literary progeria.”

By sophomore year, O’Brien had been elected Lampoon President—a role that suited him beautifully, according to Widmer, who said O’Brien had “the body of Abraham Lincoln and the head of Martin Van Buren.” He became the first leader in the magazine’s 134-year history to reign for two terms.

“The whole job is to try to strike a balance between trying to make as many jokes as possible and appear as non-caring as possible, and yet caring enough to get things done,” O’Brien said in his 1985 profile.

One day in 1984, O’Brien and a few ’Poon affiliates masqueraded as security guards while a decoy in a penguin costume made a grand entrance into a Science Center hall where actor Burt Ward was displaying his Batman costume. According to Widmer’s version of the tale, the penguin unleashed the code words:

At that moment, the boys hit the lights and dashed towards the costume. But there was one problem.

“We meant to turn off all the lights in the Science Center, but they only have dimmer switches,” Widmer recalled. “It was kind of a bungled prank.”

In the ensuing chaos, O’Brien managed to snatch the costume away.

“I just remember looking at his legs running up the Science Center stairs as I was being tackled by the Dunster House Film Society,” Widmer said.

The legacy of absurdity has certainly not dried up in the Lampoon Castle.

“Additionally, if we say his name at the Hair Cuttery we get a free bottle of styling mousse,” he wrote in an e-mail, in typical Lampoon jest.

STAR ON THE RISE

“I love when he gets out of the studio and jumps into situations with ordinary people,” Reiff said. “He played ‘old time baseball’ on Long Island, he tried to reunite two former best friends that he met in Finland.”

“It’s as if the whole world is his roommate,” he added.

In 2004, NBC promised O’Brien that in five years he’d be hosting The Tonight Show. O’Brien indeed ascended to the post in 2009, but after seven months NBC gave the show back to Jay Leno when O’Brien declined to accept a later time slot, a move he felt would have betrayed the show’s integrity.

Reiff said the way O’Brien prioritized his staff in his NBC negotiations was completely in line with his character, just as he paid his staff out of his own pocket during the 2008 writer’s strike.

O’Brien will launch a new show on TBS in November, but not before he wraps up his “Legally Prohibited From Being Funny on Television Tour.”

“He’s a keeper—I was shocked they didn’t want to keep him and build a long-term franchise around him,” Reiff said of the NBC executives. “But the way he handled it shows his character. His audience has loved his humor for a long time, but the battle with NBC gave them a glimpse of his character. That’s why they have rallied around him the way they have.”

In his 1985 profile, O’Brien made a rather prophetic closing remark:

“The perfect world would be where the ‘Conan O’Brien Show’ would be on, and you’d be reading my short story somewhere and wearing my designer jeans,” he had said.

As far as realizing dreams goes, O’Brien has done quite nicely, though we’re still waiting on the designer duds. Maybe by his 50th reunion?