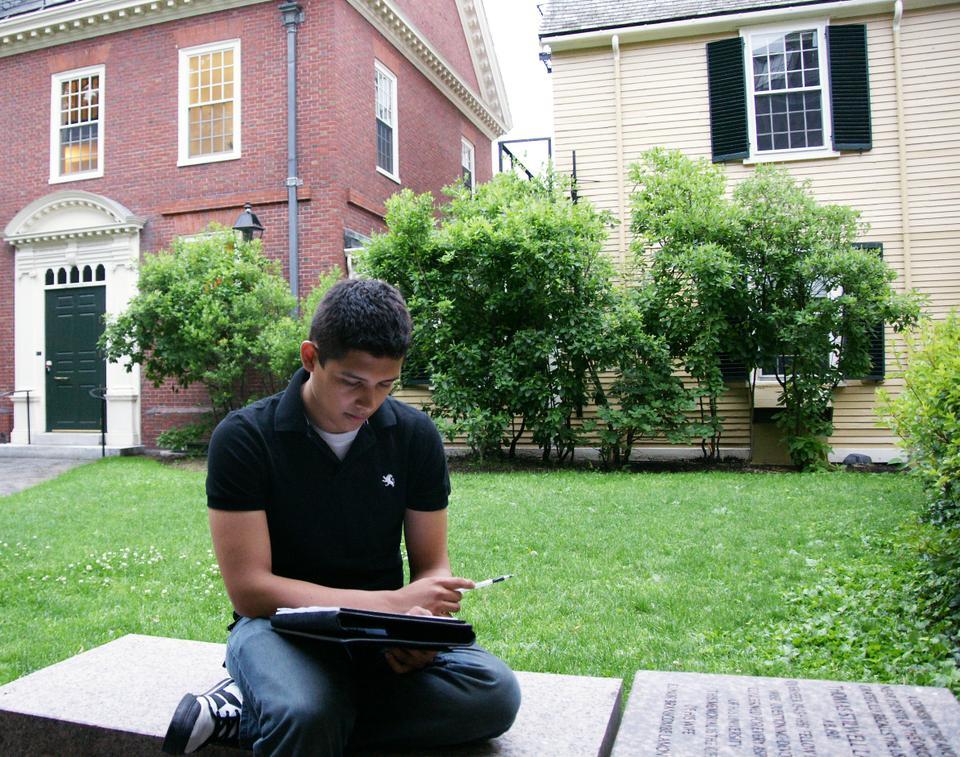 Eric Balderas '13 no longer faces deportation and will be allowed to continue his studies at Harvard.
By Xi Yu, Crimson Staff Writer

Eric Balderas '13, whose detainment last Monday for unlawfully being in the United States attracted international attention, is no longer facing deportation to Mexico, the Boston Globe reported Friday night.

Deborah E. Anker, one of Balderas' attorneys on the case and a professor at the Law School, confirmed that the Department of Homeland Security granted Balderas deferred action status, and said that they are "delighted" to hear this decision.

"DHS can grant this relief in deserving cases and we are gratified that it recognized Eric's extraordinary talent and his enormous potential to contribute to our country," Anker wrote in an e-mailed statement to The Crimson on Saturday.

Balderas, 19, who was arrested in San Antonio after attempting to board a plane back to Boston for his summer research internship, has been granted deferred action for an indefinite period—a move that will allow him to apply for a work permit in the United States and continue taking classes at Harvard. The rising sophomore in Eliot House would be able to apply to renew the deferred action when it expires.

“We are relieved that Eric Balderas’ status has been resolved for now and that he will be allowed to continue his studies," Christine Heenan, vice president of Harvard public affairs and communications wrote in an e-mailed statement to The Crimson on Saturday. "We are also grateful to everyone—including Senators Durbin and Kerry and Congressman Capuano—who came to the assistance of this bright young man during this difficult period."

The news follows a week of public outcry over his arrest, with over 5,500 people supporting Balderas with a Facebook group "Keep Eric Home" and Harvard officials affirming his academic standing. Mario Rodas, the Facebook group's creator, told The Crimson in an interview on Saturday that he and Eric are "thrilled" about the news of this deferred action.

Balderas, an aspiring molecular and cellular biology concentrator, was stopped by TSA officials in his hometown last Monday when he tried to board a plane using a Mexican consulate card and his Harvard student identification. He was arrested by U.S. Immigration and Customs Enforcement officials, who kept him in a detention center for several hours before he was released.

After the arrest revealed his status as an undocumented student, Balderas said he contemplated suicide and almost wrote a letter of apology to his mother, whom he was visiting in San Antonio. His family had illegally immigrated to the United States when he was 4-years-old.

"I had been so strong before," Balderas told The Crimson in an interview on Sunday. "And now my spirits were just destroyed."

Over the past week, Balderas has been encouraging others in his predicament to continue fighting for the DREAM Act, proposed federal legislation that would allow immigrant students to apply for legal residency.

"This event has highlighted the importance of the DREAM Act in ensuring that students like Eric can pursue a college education or military service and ultimately contribute to the future of our nation," Heenan wrote.

Rodas said that this action is only a kind of relief, but the potential passage of the DREAM Act remains an urgent issue.

"Just hang in there," Balderas said on Sunday. "Let others know of your problem and try and gain support for the DREAM Act, because that's ultimately what's going to save us all."

In addition to Anker, Balderas is being represented by Paul Glickman and Ellen Sullivan of Glickman Turley.

Neither Balderas nor ICE officials could be reached for comment Friday night.