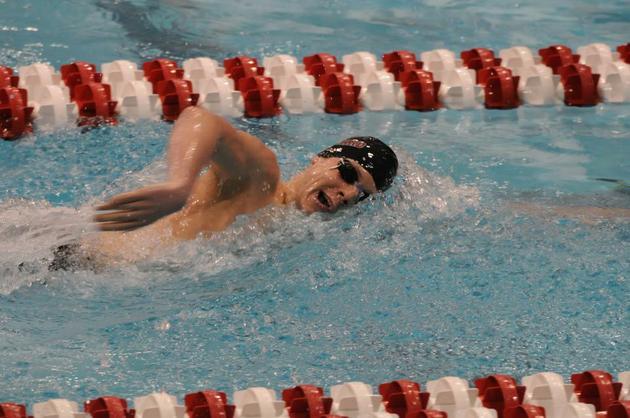 For someone accustomed to swimming 1,650 meter competitions in indoor pools, converting those skills into a 25,000 meter race out in the open water is no easy task.

But former Harvard co-captain Alex Meyer proved that he had made a successful transition when he took home the gold medal for the United States in the 6th FINA World Open Water Swimming Championships in Roberval, Canada on Thursday afternoon.

Competing against swimmers from over 10 different countries, Meyers staged a come-from-behind victory in the final 2.5k of the five and a half hour race. Meyer trailed behind Italy's Valerio Cleri by two seconds when they were 22.5k into the race, but Meyers made up the lost ground in the final stretch and edged past the Italian by just one second with a finishing time of 5:32:39.380.

By defeating Cleri, the reigning champion of the 25k competition at the 2009 World Aquatic Championships in Rome, Meyer gave the United States its second gold medal in the bi-annual international competition hosted by FINA, the international governing body of aquatic sports.

"Winning this race really means more to me than graduating from Harvard in May," Meyer said in an interview with Swimming World Magazine. "I am an open water swimmer. I identify with this sport, and also with the athletes competing here."

"Cleri is one of the world's best open water swimmers, and I certainly thought he would be the fastest in the field," Meyer added. "I feel I am a better sprinter. I think I snuck up on Cleri, and I don't think he knew I was close behind him."

“He trained all spring while most of the seniors were having a good time,” said Crimson coach Tim Murphy, who helped Meyer train for the competition even after Meyer graduated. “He’s put a lot of [training] volume in.”

Just one week after Meyer received his diploma, he traveled to Long Beach, Calif., to compete in the U.S. National Open Water Swimming Championships, at which he secured two fourth place finishes in the 5k and 10k, qualifying him for this past week's international competition in Canada.

In the weeks leading up to the FINA World Open Water Swimming Championships, Meyer trained with Murphy, often swimming at the nearby Walden Pond.

“He’s only been a pool swimmer so he focused on the pool all through college. But he has loved open water swimming since he was 13,” said Meyer's mother, Shawn Meyer, following the competition. “This summer, he graduated and was able to focus on open water exclusively.”

The training seems to have paid off, as Meyer took home the gold after competing in just his second career 25k race.

In his first 25k competition at the 2009 World Aquatics Championships in Rome, Meyer was in fourth place near the end of the 25k competition when he was disqualified for swimming across the legs of a swimmer from another competition.

“It was heartbreaking for him,” Shawn Meyer said. “I think it made him more determined… I know that [this gold medal] is immensely important to him.”

While both Murphy and Meyer’s mother were not in attendance at the competition, Murphy said he received a picture on his phone of Meyer standing on the podium with the gold medal around his neck and the American flag above his head.

“There can’t be too much sweeter than that,” Murphy said.

Now that Meyer has taken home the gold for the United States at the World Open Water Swimming Championships, his goal is to represent the country at the 2012 Summer Olympics in London, according to his mother. Open water swimming was first introduced as an Olympic sport at the 2008 summer games held in Beijing.

“Needless to say, he’s got a lot of ground to cover to get there,” Murphy said.

While at Harvard, the former co-captain managed to rewrite the Crimson record books, notching the second-fasted time in school history in the 1,650 free. Meyer posted a time of 14:58.13 at the NCAA Championships in the event, good for a 14th place finish.

“He’s just made a huge contribution to the program,” Murphy said, “He will be hugely missed. He just came in from day one and was competitive.”

Meyer could not be reached for comment Thursday afternoon.