Even in NBA, Jeremy Lin to Win for Harvard? 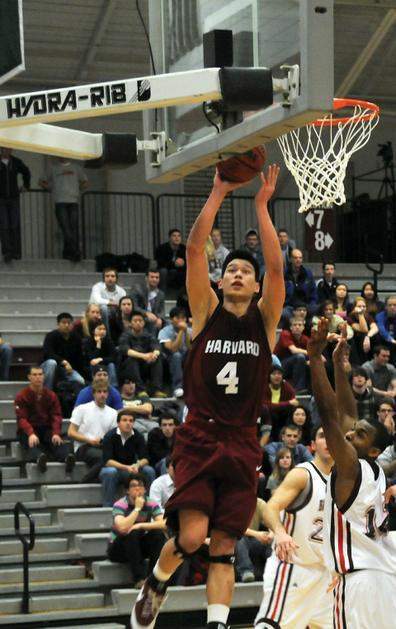 Most college basketball players would be satisfied with a standout collegiate career capped with personal accolades, invitations to national showcases, and interest from NBA scouts. But for former Harvard co-captain Jeremy Lin, who recently signed with the NBA’s Golden State Warriors, he had failed to achieve one of his team's biggest goals: to win the Ivy League championship.

“As a team, we’re expecting to win the whole Ivy League,” Lin said, days before the beginning of his senior season. “We want to hang a banner, and that’s what we expect to do.”

Though Lin and his teammates finished the season third in the Ivy League, Lin may nevertheless have a significant hand in reversing circumstances. His story has become inspiration for many Crimson players and fans who hope that the fruits of Lin’s legacy will help the Harvard men’s basketball program win its first ever Ivy League championship.

After a following an unlikely path to the NBA, Lin is set to become just the first Harvard player in 57 years to step foot on an NBA court. Lin went undrafted at the 2010 NBA draft despite an exceptional four-year career at Harvard. But he managed to earn a spot in the NBA Summer League, where he turned heads and raked in a handful of contract offers from NBA teams. In storybook fashion, Lin settled on the team he grew up rooting for: the Golden State Warriors.

Armed with the advantage of having successfully nurtured and produced an NBA star like Lin, the Harvard men’s basketball program may have become a more attractive destination for promising high school players—especially when Harvard’s academic reputation may not be enough of a draw for those with NBA dreams.

“They’ve got the education part down pat,” said Jeff Goodman, a senior basketball writer for Fox Sports, about Harvard. “Now they can say, ‘We can get you to the NBA.’ It’s hard to say that in the Ivy League. Now [Crimson coach] Tommy Amaker can say that.”

The Ivy League and the NBA have not had a strong relationship in recent years. The Ivy League was one of just five college basketball conferences without a representative in the NBA at the start of the 2009-2010 season and one of only two conferences without a representative in the NBA over the past five seasons. In fact, it’s been eight years since an Ivy Leaguer graced the NBA hardwood after Yale’s Chris Dudley and Penn’s Matt Maloney retired in 2002.

Crimson starting center Keith Wright ’12 echoed Goodman’s sentiments, stating that Lin’s signing with the Warriors can only “positively” affect the Harvard basketball program and that more prospects may be interested in coming to Harvard to play for the team after witnessing Lin’s rise to the top.

And this is a significant benefit for Amaker and his coaching staff, who tried but failed in recent years to land highly-touted players like Stanford’s Dwight Powell, Vanderbilt’s Rod Odom, and Davidson’s Frank Ben-Eze. Lin’s signing, according to Goodman, will likely help the Crimson in its efforts to land its first recruit ranked in the top 100 nationally of his high school class.

“I think it’s going to take that first guy—that first top 100 guys—to make it cool, then it’ll be a lot easier for the next guy,” Goodman said. “They’ve been knocking on the door, but can they get that first one…If you start bringing in top 100 kids to Harvard, it’s going to start being scary for the rest of the Ivy League.”

The Crimson is currently in the process of recruiting high school players like Andre Hollins, an elite player from Tennessee who has kept Harvard—in addition to Stanford, University of Mississippi, and University Tennessee—on his list of college destinations. Hollins’ Amateur Athletic Union coach Keith Easterwood said that Lin’s signing with the Warriors demonstrates that “Harvard can be the vehicle” for players like Hollins who are pursuing NBA dreams.

“I’ll be shocked if Harvard is not one of the top five schools,” Easterwood said of Hollins’ college preferences.

Yet another elite prospect on the Crimson’s wish list is Shane Larkin, a Florida resident who is ranked 88 on ESPN U’s top 100 recruits from the class of 2011. Larkin said that Lin’s NBA success has increased the appeal of Harvard as a college choice.

“It definitely raised my interest in Harvard a little bit,” said Larkin, who is also being recruited by UCLA, Wake Forest, Georgia Tech, and Florida State. “It just shows that they can develop players at their school too.”

Though Lin’s signing admittedly provides the Crimson an advantage during the recruiting process, particularly in comparison to other Ivy League programs, Scout.com national recruiting director Dave Telep said that he does not think Lin’s story will dramatically change the outcomes of Harvard’s recruiting efforts.

“It’s a talking point [during recruiting], but it’s a piece of the puzzle,” Telep said of Lin’s signing. “I don’t think it alters the landscape. You’re not setting out to recruit NBA players. You can’t get those guys…[But] it’s definitely something different than most guys in the Ivy League can say.”

Ultimately, the factors that have traditionally kept Ivy League schools from landing elite recruits—such as their lack of athletic scholarships, high admissions standards, and minimal national exposure—will interfere with the Harvard coaching staff’s hopes of landing its dream prospects.

Though Lin’s story may not necessarily cause waves of Crimson recruits to line up outside of Amaker’s door, his signing has certainly given credence to the training he received at Harvard. Lin said that his career “really took off” under the instruction of Amaker and his new brand of basketball. Lin pointed to Amaker’s encouragement of up-tempo style of play and non-conference contests against elite opponents as factors that helped mold him into an NBA prospect.

When Amaker arrived at Harvard in 2007, Lin had just concluded his freshman season, during which the rookie averaged 4.8 points in over 18 minutes per contest. The coach quickly implemented a number of changes to the program, including the recruiting of stronger players, playing at a faster tempo, and scheduling tougher non-conference opponents.

Lin thrived in the new style of Harvard basketball, averaging 12.6 points, 4.8 rebounds, and 3.6 assists per game during his first season with Amaker.

“He has a different brand of basketball in terms of he goes up and down a lot,” Lin said. “It’s a fun style and that’s very different from the rest of the Ivy League.”

While the up-tempo style of play helped improve Lin’s numbers, it was the Crimson’s contest against the likes of Michigan, Boston College, and UConn that increased Lin’s national exposure. Lin burst onto the national stage as a junior when the then-unknown Asian American guard carried the Crimson to an improbable victory over then-No. 17 Boston College.

Lin followed up on his career performance at BC a year later, leading the Crimson to another defeat of the Eagles, this time by racking up 25 points four assists and three rebounds. But it was Lin’s 30-point explosion as a senior against UConn that really put Lin on the national stage, as Lin was soon featured in articles on ESPN.com, Sports Illustrated, and Time Magazine.

“[The non-conference schedule] was huge,” Lin said. “That’s what got Harvard and my name out there… Coach Amaker has done a great job with scheduling and getting those teams.”

While Lin’s signing may help bring in high-caliber players to Cambridge, it has also had an impact on players already in Crimson uniform—and some have expressed a renewed focus on training.

“It is just motivation,” said Wright, who is on campus this summer working out multiple times a day at Lavietes Pavilion. “He’s somewhere where every basketball player dreams to be. I just use that as motivation. He definitely changed the thought process of a lot of the guys on the team.”

“It’s definitely motivation,” said point guard Brandyn Curry ’13, who has been working out 12 times a week in North Carolina, on top of rehab four times a week for his knee. “Our dream is to play in the NBA. It just makes us realize that it’s definitely possible and we have to be working harder everyday just like [Lin] did.”