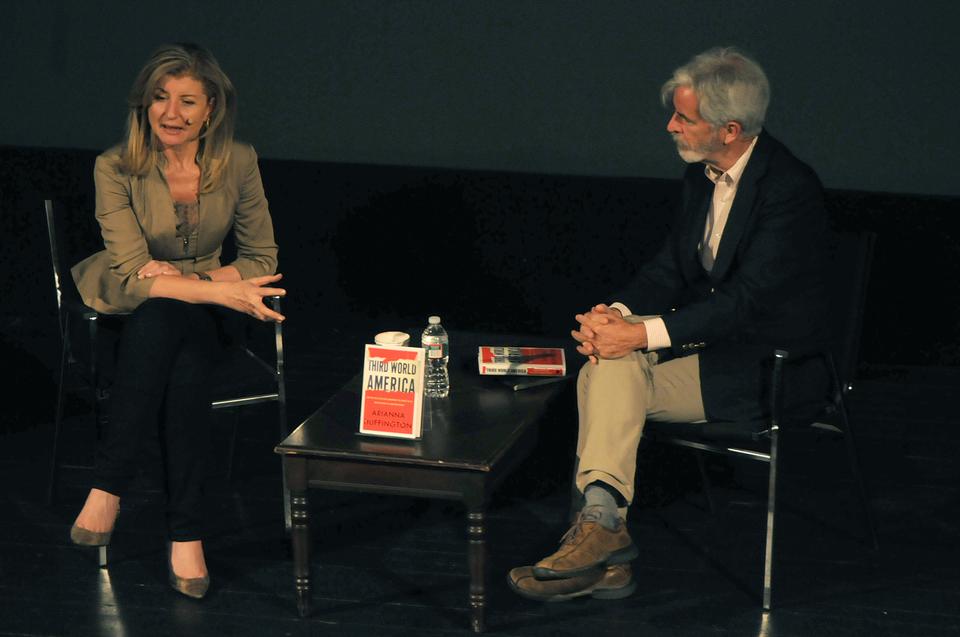 Arianna S. Huffington, co-founder and editor-in-chief of The Huffington Post, discussed her latest book, “Third World America: How Our Politicians Are Abandoning the Middle Class and Betraying the American Dream,” with a packed auditorium of mostly white-haired Cambridge locals last night at the Brattle Theatre, which she described as “redolent of history.”

“It doesn’t exactly feel like third world America,” said Huffington, a one-time candidate for California governor and author of 13 books, as she looked out at the structure’s small capacity and exposed beams. “But it kind of could be.”

The discussion, led by WGBH’s Christopher Lydon, posed a series of questions—mostly related to the declining American middle class—to Huffington, who spoke on subjects as diverse as the “staggering” rates of unemployment in Racine, Wis., the tax-free lingerie she received for her role in “Strange Bedfellows” with Al Franken, and her favorite heroine in Greek mythology, Cassandra.

“They didn’t believe her, and they turned out to be very wrong and very dead,” Huffington said. “The idea here is to sound the alarm,” she added, referring to her book.

The villains in the book, Huffington said, are “those who allow themselves to be bought, like in a banana republic.” Later, in response to a question, she conceded that the middle class itself bears some responsibility for its economic situation.

In between anecdotes about her personal transformation from Bob Dole supporter to outspoken Democrat to, as Lydon put it, media’s “transformation,” she told the audience of her commitment to the fight against “third world America.”

The Huffington Post now features a new section devoted to “third world America,” she said, which collects stories of both success and struggle.

Asked what part of her book was most relevant to students, Huffington pointed to the fifth section, which, she said, is “all about solutions.”

“The millennial generation has already shown that they want to take action—TFA, City Year. There’s a really important response that’s happening. Success and money isn’t going to be the way to fulfillment,” she said.

Reactions to the event were mostly effusive.

“I wrote down my favorite thing she said,” said John Postol, an attendee, rummaging through his bag after the event. “‘We’re a country...that stopped making things and started making things up.’ I thought that was a great quote.”

At a discussion of the declining American middle class, prices failed to deter a large portion of the audience from purchasing the book. According to Nicole Shirley of the Harvard Bookstore—which organized the event and sold copies of Huffington’s book on-site—sales were good, despite the book’s $23.99 price tag.

As Lydon asked the audience during his introduction, “How many of you would have paid $5 to hear the publisher of the New York Times talk about his book, or the head of CBS, whoever that is?”