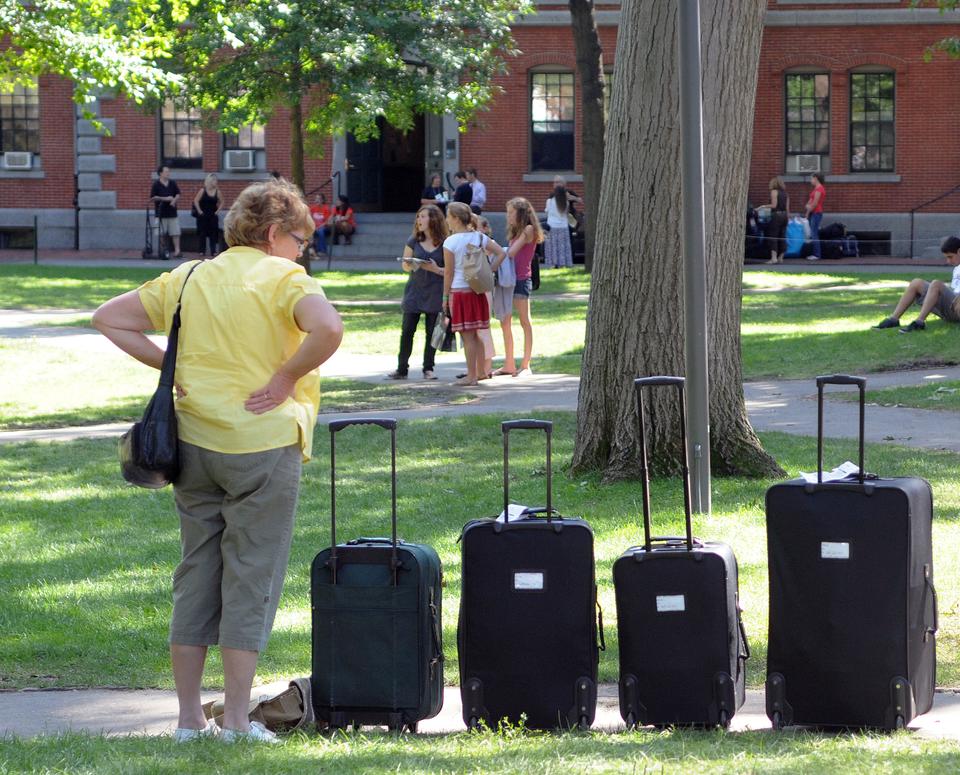 Freshmen, their parents, and their belongings filled the Yard last week as the Class of 2014 arrived on campus and moved in to the dorms in Harvard Yard.
By Xi Yu, Crimson Staff Writer

From facing long lines for hot food in Annenberg to calling home for instructions on how to do laundry, the freshman class of 2014 has quickly learned that the awkward introductions and silly questions are just a part of settling in.

Although each freshman may handle the transition to college life differently, their learning experiences mirror those of Harvard classes from throughout the years.

YOU HAD ME AT HELLO

In a freshman class of just over 1600, the adjustment process began with meeting new classmates. Or at least trying to.

“I think that there’s a mutual understanding between all freshmen that forgetting someone’s name is completely forgivable,” said Margaret W. Fulham ’14, a resident of Mower. “After you meet them again, you’ll remember their name, so it’s not a big deal. Nobody gets upset if you forget their name.”

Godwin O. Abiola ’14, whose entire high school in North Carolina was only 1200 students, was amazed at the Harvard’s diversity

A ROOM OF ONE’S OWN

For some freshman, the excitement of moving into a new dorm was tempered by the dorm’s distance from Harvard Yard itself.

Justin To ’14 said that he was initially unhappy to find out how far his assigned dorm Greenough was from the freshman dining hall.

“At first, I was disappointed because I heard nightmare stories about the walk to Annenberg,” To said, “but it’s not that bad.”

But To said that he was not particularly fond of the dining hall food anyway.

“The food in Harvard Square compensates for it,” To said.

Other freshmen were struggling with washing their first load of laundry—without the help of parents.

Back at her dorm in Straus, Droege found herself helping out several male classmates in her entryway with their first loads of laundry.

“I don’t think any of them had ever done laundry in their life,” Wren R. Droege ’14 said. “‘Can I put my socks in the washer?’ ‘Where does the detergent go?’” she recalled them asking.

Mateus C. Falci ’14, however, said he was not afraid to admit that he needed to call his mother in order to determine what items of clothing he could and could not put in a dryer.

For some newcomers, it was the weather in the last week that proved most challenging.

“I’m from California. I’m not used to the humidity at all,” To said. “This is the first time I’ve been drenched in sweat.”

“Apparently, I brought Florida weather up with me,” Falci said. “Not only is it hot and humid, but there’s also a hurricane coming.”

Despite the new difficulties of college life, some freshmen are still finding little gems of encouragement to pull them through their first weeks.

To, for instance, found a housewarming gift from his mother in the mail—Ritz crackers, a favorite snack.

“My mom mailed me Ritz crackers because she was afraid that I wouldn’t be able to get them here.”

For other freshmen, simply the knowledge that they were here on campus as college students was a welcoming feeling.

“At some point during convocation, I think I got chills,” Falci said. “I realized how fortunate I am to have this opportunity to be here.”