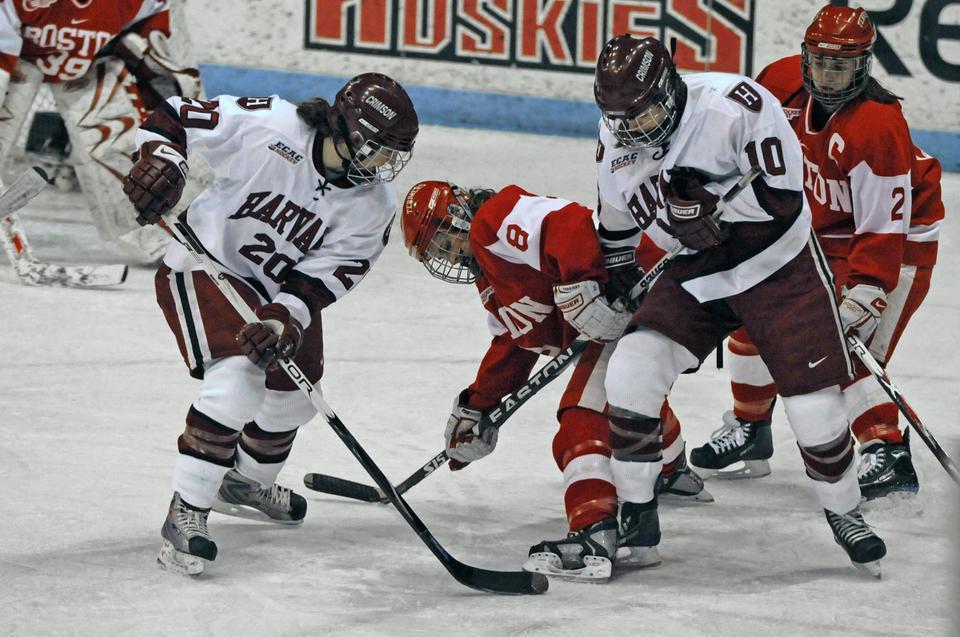 Tri-captain Kate Buesser, shown here in earlier action, scored the winning goal that sealed Harvard's win over Clarkson. The Golden Knights made a final push in the third period to no avail, dropping the contest, 3-2.
By Martin Kessler, Crimson Staff Writer

For just the second time this season, the Harvard women’s hockey team completed a weekend sweep.

After defeating St. Lawrence on Friday, the Crimson (8-7-2, 7-3-2 ECAC) came up with its second consecutive victory last night at the Bright Hockey Center, claiming a 3-2 win over Clarkson.

“We were coming off a huge win [Friday] against St. Lawrence, so we were really fired up to play Clarkson,” freshman Marissa Gedman said. “We definitely came out flying all three periods and had the edge the whole game.”

Harvard controlled the contest from the outset, bringing a two-goal lead into the third period. The Golden Knights (7-13-3, 4-6-1) fought back in the final frame, pulling within a single goal, but were unable to even the score.

“I was happy with how our kids played,” Crimson coach Katey Stone said. “We hung on and did a good job.”

After keeping Clarkson off the scoreboard throughout the first 40 minutes of play, the Golden Knights’ offense came alive in the final period.

Once the puck dropped to start the third, it didn’t take long for the visitors to net their first score. When Harvard senior Leanna Coskren was sent to the penalty box for checking with 18:35 to play, Clarkson used its advantage to find the back of the net. Just 19 seconds into the power play, forward Carly Mercer scored off a pass from Danielle Skirrow to pull within one.

“We were just a little hesitant at the beginning of the kill,” Stone said.

Up just 2-1, the Crimson received some insurance from Buesser.

With just less than 11 minutes to play, Buesser came up with the puck behind her opponent’s net. The forward skated along the boards before turning and swooping toward the cage, finishing with a shot that sailed between the netminder’s legs.

With Buesser’s goal, Harvard appeared to have the contest locked up, but the visitors made one last push.

With three minutes to play, Clarkson pulled its goalkeeper and, using its one-man advantage, netted a score from Juana Baribeau with 27 seconds to play. But the Crimson’s defense held firm over the contest’s final seconds, keeping the Golden Knights from registering a shot attempt and sealing the 3-2 victory.

“It got closer at the end than it should have been,” Stone said.

While Harvard’s defense slipped up at times during the final period, the Crimson defenders played a nearly flawless first two periods.

After 40 minutes of play, Clarkson had registered just seven shot attempts, and sophomore goalie Laura Bellamy—who picked up her seventh win in net—had stopped them all.

“We’re getting stingy [on defense] and that’s what we need to do,” Stone said. “I think our defensemen are starting to feel better and a little bit more confident.”

It took Harvard less than seven minutes to get on the scoreboard, as Fry finished a pass from tri-captain Liza Ryabkina with 13:22 left in the first to take the 1-0 lead.

The Crimson padded its lead in the second frame, capitalizing on a Golden Knights penalty to go up 2-0. Gedman did the honors on Harvard’s second score, firing a shot from just inside the blue line that sailed past the Clarkson goalkeeper and into the net.

“I was just trying to get it to the net and good things happened,” said Gedman, who now has two scores on the season.

The Crimson continued to push the pace offensively, entering the third period with a 24-7 shot advantage and a 2-0 lead.

With the two weekend victories, Harvard moved into a tie for second place in the ECAC standings,

“Every win is so important,” Stone said. “That’s our goal is to win two every weekend.”