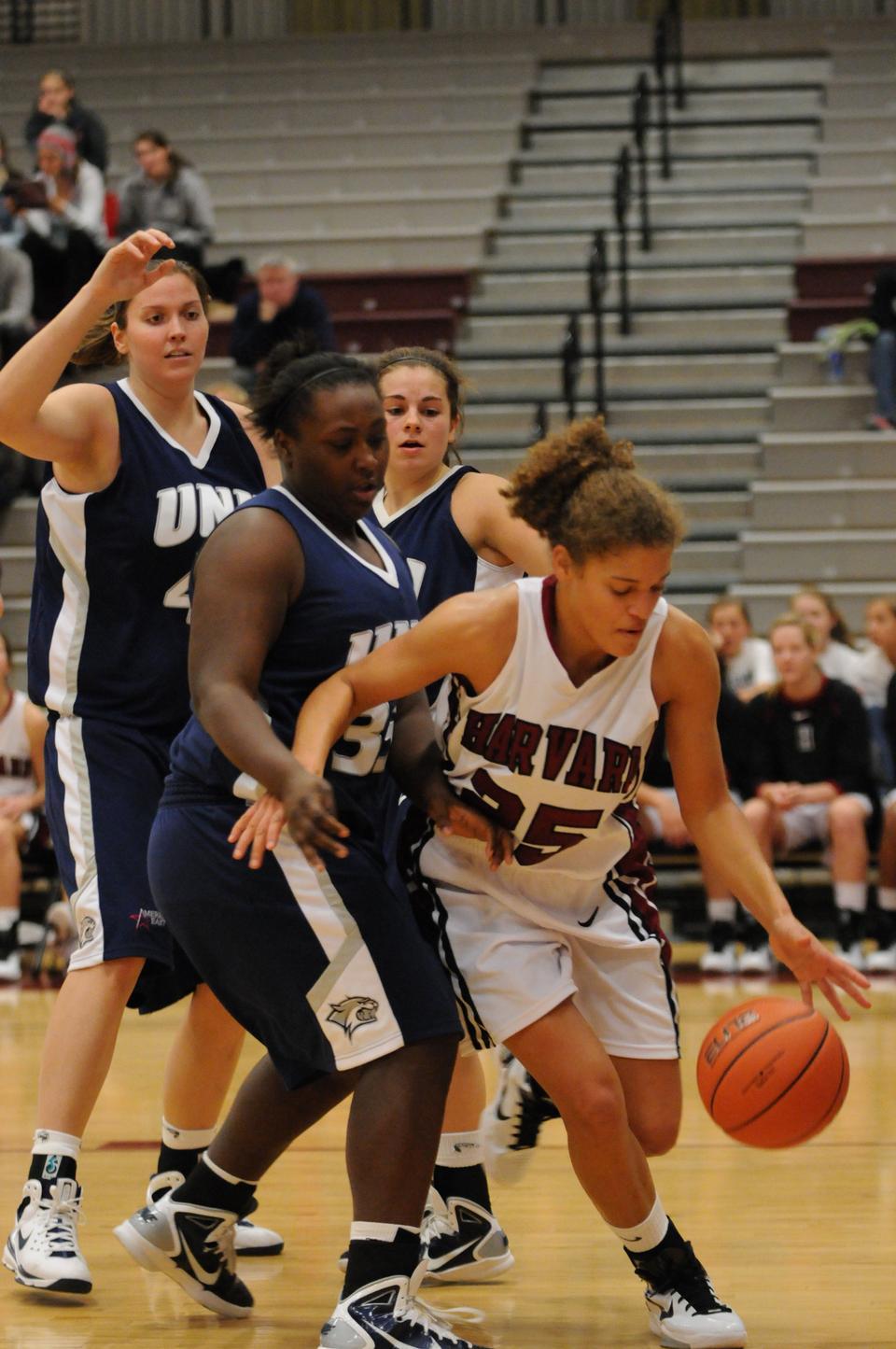 Sophomore Miriam Rutzen, shown here in previous action, tallied the first double-double of her collegiate career against Seattle Saturday afternoon. The forward’s 16 points, 12 rebounds and five assists—which were all career highs—helped Harvard to a 69-55 win over the Redhawks.
By Kevin T. Chen, Crimson Staff Writer

What a difference 15 minutes can make.

Trailing 27-19 at halftime in its last nonconference game against Seattle University, Harvard coach Kathy Delaney-Smith saw in her squad a slow-starting team stymied by an opportunistic Lady Redhawks defense that created 21 turnovers.

But the veteran coach made the necessary adjustments, and the Crimson (9-6, 1-0 Ivy) came out with a surging second half to take the win, 69-55, against the Lady Redhawks (5-16) at the Connolly Center in Seattle, Wash. The matchup on Saturday night was the first-ever meeting between the two schools.

“I would have to credit Seattle’s defense,” Delaney-Smith said. “A lot of teams hadn’t played us the way that Seattle did, so we had to talk about it. We didn’t play a great first half, but the fact that we could make the adjustments and not roll over and die says a lot about the confidence, belief, and trust we had in each other.”

Sophomore forward Miriam Rutzen had her best game in a Harvard uniform, notching her first double-double with 16 points and 12 rebounds to go along with five assists.

“[Rutzen] is one of the hardest workers on the team, and I think that it really showed today,” Berry said. “She hit all of the shots, got all of her rebounds and passed the ball well. She had an all-around perfect game. When you have a player like that, it’s so easy to play with her.”

Despite the final score showing every indication of yet another strong performance by the Crimson, the team struggled early in the first half to find its offensive rhythm.

Constant ball pressure on the Harvard guards and forwards led to just 19 points in the first 20 minutes of play, as the home team jumped out to an eight-point lead.

The Crimson shot just 30.4 percent from the floor and was 1-of-7 from beyond the arc.

“Against Dartmouth, we had a really great game and we tried to use that as an example of playing together as a team,” Berry said. “At halftime, we just had to remind ourselves that we’ve been [down] before and we can come back to win.”

The difference between the first and second half of play proved to be night and day for Harvard. With a defense that capitalized on creating steals, the Crimson quickly erased its first-half deficit to take control of the game. With 12:07 to go in the second half, a Lippert three-pointer off of an assist from Rutzen capped off a 24-12 run to give Harvard a 43-39 lead.

More turnovers ensued from the Crimson defense, as a steal from Berry—one of her four on the night—led to a fast-break bucket for Markley that essentially sealed a Harvard victory with 2:05 to go.

“In the second half, our comeback really came from our defense, and we got easy steals and easy transition baskets,” Berry said. “Once we had a bunch of runs, [Seattle] got tired, so the pressure wasn’t as strong and, offensively, we were able to wear them away.”

“We only had three turnovers in the second half,” Delaney-Smith said. “We took care of the ball and were able to be a little stronger attacking offensively.”

After a 9-5 record last season against teams outside of the Ivy League, this year’s Crimson team has had a more difficult time getting through the nonconference slate.

But the victory—and, more importantly, the adjustments made by her team at halftime—has given Delaney-Smith confidence as Harvard continues Ivy League play.

“I like the feel of our team,” Delaney-Smith said. “It’s hard for me to verbalize it, but there’s an attitude that reflects toughness, confidence, and experience. Our experienced players are healthier, our younger players have more experience and are a little smarter on the court, and we believe in ourselves. I really like where we are.”