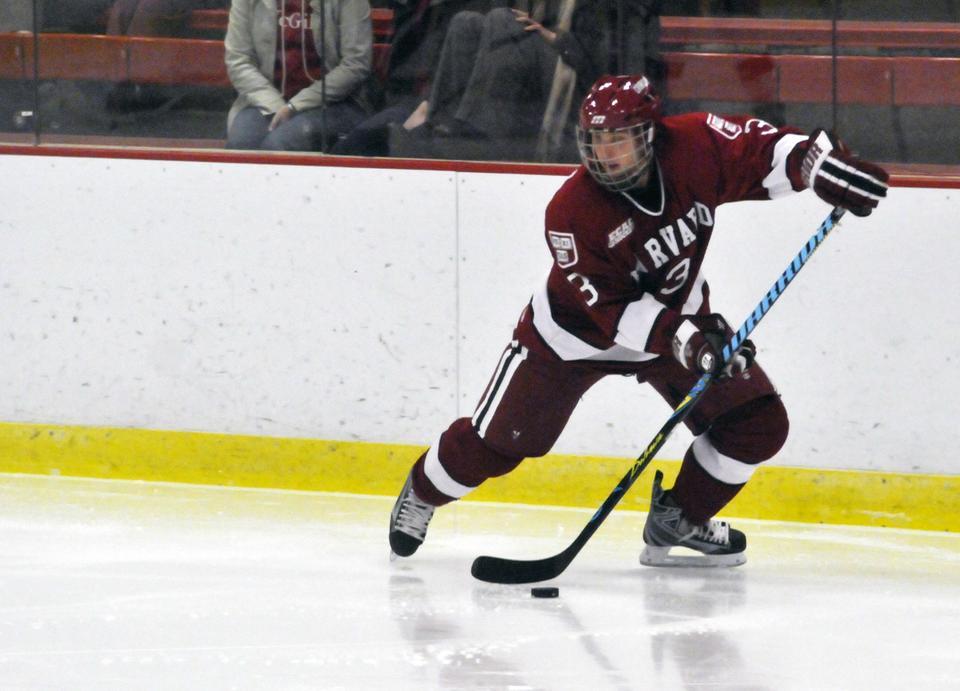 Senior Michael Biega, shown above in earlier action, is tied for the team lead in goals and points this season. Harvard takes on arch-rival Cornell this Saturday. The Big Red leads the all-time series 69-58-7 and knocked off the Crimson 6-3 and 3-0 in last season’s matchups.
By Scott A. Sherman, Crimson Staff Writer

Not much has gone right for the Harvard men’s hockey team this season.

After losing 14 of its previous 15 games, the squad currently sits in the penultimate position of the ECAC standings with a 2-11 conference record.

But tomorrow, the Crimson has the chance to inject a little bit of life into an otherwise disappointing year if it can take down conference rival Cornell in what is the most anticipated game of the season for many of its fans.

The rivalry—which dates back to 1910—is such that it has its own Wikipedia page, purports the throwing of dead fish onto the ice in Ithaca, and plays a key role in the book “Love Story.”

“I guess the rivalry goes back a long way,” sophomore forward Luke Greiner said. “There’s a lot of history...it’s always exciting to play them. The crowds come out and we get a lot of good support. It’s always a good game and it’s a lot of fun.”

This weekend, the 135th installment of the contest takes place at the Bright Hockey Center, where the Big Red arrives in the midst of a disappointing season of its own. While Cornell’s female counterpart has dominated its way up to No. 2 in the country, the men’s squad (8-9-2, 6-5-1 ECAC)—which began the preseason ranked No. 11—has had an up-and-down season that has seen it drop out of the Top 25 altogether.

Cornell’s struggles have been offensive, as the team has had difficulty scoring all season long. The Big Red has only registered 53 goals on the year, second-to-last in the ECAC (which nonetheless still puts them 21 ahead of last-place Harvard). But the lack of scores doesn’t stem from a lack of opportunities, as Cornell’s 25.8 shots-per-game average puts it first in the ECAC.

“They like to maintain pressure in the zone for extended periods of time,” senior defenseman Chris Huxley said. “So at certain points we need to weather the storm and accept that they’re going to be in the zone for a bit and not get too rattled about it.”

Senior Tyler Roeszler leads the Big Red with eight scores, and is coming off a hat-trick in Cornell’s last game, a 5-2 win over Colgate on January 22. Classmate Joe Devin has racked up seven goals, while sophomore Greg Miller is first on the team with 18 points, thanks to his 16 assists.

In net, Cornell has split goaltending duties between junior Mike Garman and freshman Andy Iles, who have started ten and nine games respectively. The duo has performed similarly on the season, with Garman (4-5-1) sporting a .919 save percentage and 2.30 goals-against-average to Iles’ (4-4-1) .910 and 2.50, respectively.

Attacking that defense will be a Harvard line led by senior Michael Biega and junior Alex Killorn, who each have eight goals and 14 points to lead the team. Sophomore Danny Biega is tied for sixth in the country for points among defensemen, with 12.

“[We’ve been working on] making sure we get our forecheck going, keeping our puck in their zone, and creating down low,” Greiner said of the offensive game plan.

In net for Harvard will likely be senior assistant captain Kyle Richter, who features a league-average .909 save percentage and 2.77 GAA.

Defensively, the Crimson will look to contain a Big Red offense that struggles on power-plays, with only 12 man-up goals on the year. But Cornell doesn’t garner many penalties either, ranking 10th in the conference in penalty minutes.

The Big Red has also done a much better job killing other teams’ man-up opportunities, and ranks first in the conference in power-play goals against. That could mean trouble for the Crimson, which ranks last in the league in both power-play scores and chances.

Despite these struggles, Harvard will be fired up to play its biggest rival in front of a likely sold-out crowd at home. Cornell leads the all-time rivalry, 69-58-7. Adding to the stakes is the fact that the Big Red embarrassed the Crimson twice last season, winning, 6-3, in Ithaca and shutting out Harvard, 3-0, in Cambridge.

But until then, Harvard simply is focused on tonight's contest at home versus the league bottom-dwelling Raiders.

“It’s exciting,” Huxley said of the rivalry. “But we have a game Friday that we’re going to think about first, so it’s kind of a one-game-at-a-time thing for now.”