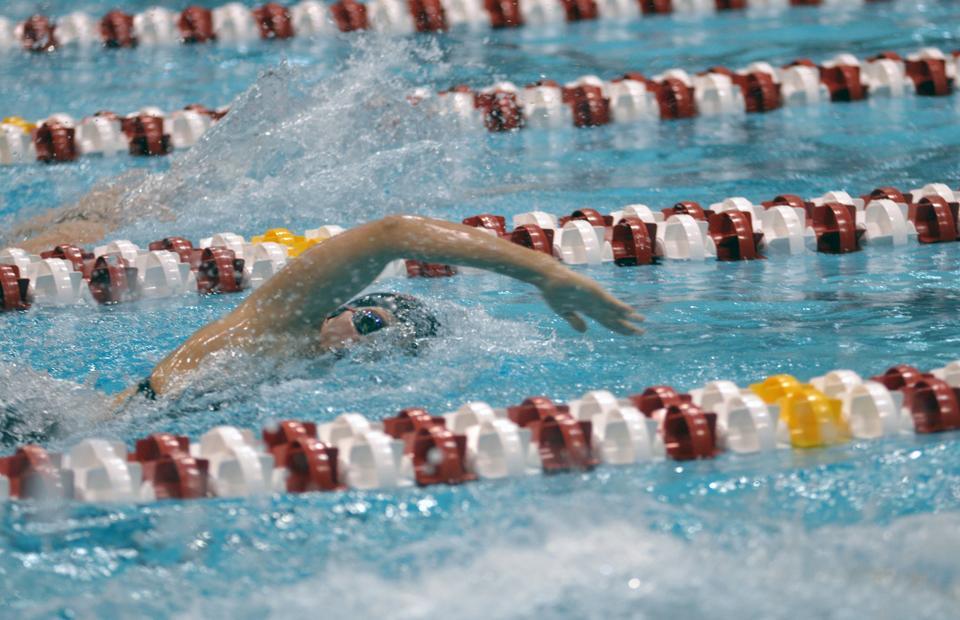 Senior Kate Mills has won two races at Brown and the 200 free against Penn this year. The women’s swimming squad takes on Ivy foes Princeton and Yale at the HYP meet this weekend in New Haven.
By Steven T. A. Roach and Aparajita Tripathi, Crimson Staff Writers

Both the Harvard men and women’s swimming and diving teams will put their perfect season records on the line this weekend against Princeton and Yale, when the Crimson squads travel to New Haven, Conn. to wrap up regular season action with the annual HYP meet.

This season, the Harvard men’s team (7-0, 5-0 Ivy) opened up regular action against Dartmouth in impressive fashion, cruising past the Big Green, 222-78. After that win, the Crimson has shown no signs of slowing down. The closest score line was a 156-106 win over Boston University, and Harvard seemed in control for the entire meet.

“To be undefeated so far has been great, but it’s more so how we’ve been winning the meets, not just the fact that we’ve won them,” co-captain Justin Davidson said. “It’s been great getting to see everyone step up and contribute some points.”

But, like in past seasons, the team’s success could change at the HYP meet. One of the Crimson’s competitors this weekend, Princeton, also holds a perfect record this year. While Harvard has had considerable success over the Bulldogs in the recent past, the squad has not been able to match that success against Princeton. The Crimson has not won against the Tigers in the last two years.

In last year’s meet, Harvard dominated the Bulldogs, posting a crushing 242-106 victory over Yale. But the Crimson couldn’t pull off the win against Princeton, losing a tough 203-150 matchup—the only blemish in a near-perfect conference record. Harvard led the three teams in the freestyle events, while the Tigers cleaned up in the medley events.

“I think in terms of facing Princeton, one of the areas we’ll be looking to improve would be the relays,” Davidson said. “I think that based off of the work we’ve been doing, we have the opportunity to reverse the trend… and come out on top in those events.”

The Crimson has lost a group of its seniors that led the team last year, but Harvard has a strong freshman class this season that has been producing solid results for the squad. In last weekend’s 197-103 victory over Penn, freshman Wes Stearns led the field in the 1000-yard freestyle with a time of 9:21.12 and also placed first in the 500-yard freestyle. Another freshman, Chris Satterthwaite, won the 100-yard freestyle in 45.49 seconds.

On the women’s side, two of the three competing teams will surrender their perfect league records thus far, as Harvard, Yale, and Princeton all enter the meet undefeated in Ivy action. The Crimson finds itself much in the same position as it was at this stage last year, gearing up for this weekend’s meet with the regular-season title on the line. But this time around, Harvard looks to close out both of its top rivals, a feat it fell short of accomplishing at the 2010 HYPs.

The meet arrives on the heels of what has already been a busy post-holiday schedule for the Crimson. Shortly after completing a rigorous J-term training session in St. Croix, only three days after returning to Boston, the team began the New Year with a 198-97 victory over Brown. Harvard followed up this performance last weekend when it juggled appearances at the Rutgers Invitational in New Brunswick, N.J., on Friday and a league contest against Penn on Sunday. A sweep of the individual medley races and strong diving results from freshman Schuyler Moore awarded the Crimson second place at Rutgers. The squad then returned home to top the Quakers, 192-105, at Blodgett Pool.

But the short turnaround times between its January meets, coupled with the decision to enter winter training even earlier this year, has raised a few doubts among the Harvard women that they can capitalize on their 2011 momentum when they arrive in New Haven once again.

“Any competition is really exciting for us,” junior Margaret Fish said. “We just keep our eyes on the prize and never let the [number of meets] weigh us down in the process.”

Members of the Crimson contingent to watch include senior Kate Mills, who registered two event wins at Brown in addition to a victory in the 200 free against Penn. But, as with the men’s team, it’s not only the upperclassmen that have been bolstering Harvard’s quest to reclaim the Ivy title. Freshmen Paige Newell and Jenna Gregoire both delivered first-place finishes in individual and relay events, respectively, against the Bears earlier this month.

“We’re taking our entire team down to HYPs since we’re facing our biggest competitors,” Fish said. “Princeton has beat us in the past couple of years. They take a lot of pride in their dual meet record, so we’re really excited to go up against them.”

—Staff writer Aparajita Tripathi can be reached at atripathi@college.harvard.edu.